The “Pack the Plaza” rally outside KeyBank Center on Saturday to protest management of the poorly performing Buffalo Sabres was anything but packed, but many who attended considered it a win — some after warming up with hot chocolate and coffee offered by the Sabres' organization.

“If Terry Pegula would just acknowledge the problem and have a heart-to-heart with fans, I’m sure he’d subdue some of the anger,” said Peter Tripi, a Canisius College sophomore who organized the rally.

The Sabres are at risk of losing the next generation of devoted fans because the team has not earned a spot in the playoffs since 2011, said Trevor Browning, a Williamsville resident attending the protest.

“I went to my first Sabres' game when I was 3 years old. I remember Daniel Briere, Chris Drury … Dominik Hasek, but the kids today don’t have those kinds of memories,” the 24-year-old said. “When they get to be my age, they won’t be fans.”

Though the protesters complained the Pegulas have been too quiet, these hockey fans remained respectful toward the owners. Thankfulness was often voiced for their purchases of the Sabres and the Buffalo Bills and for keeping the teams here.

And while Tripi, who has been interviewed by ESPN over his frustration with the Sabres, was predicting hundreds of protesters at Saturday's rally, just over two dozen showed up. 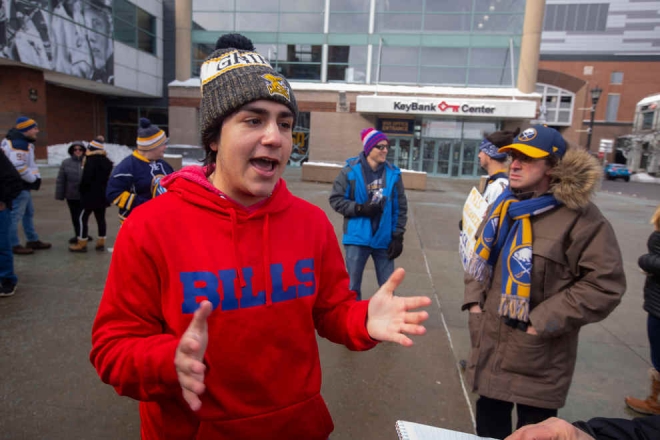 Protest organizer Peter Tripi talks about his and other fans' frustration with management of the Buffalo Sabres and the team's lack of wins. (John Hickey/Buffalo News)

Tripi nonetheless said he was happy with the attention the protest received from the media and online.

The Sabres' organization is not deaf to the fans’ concerns, said Kevyn Adams, the Sabres’ senior vice president of business administration.

Adams, who made his comments in the arena’s lobby, stepped outside and invited the protesters to come inside and warm up from the 21-degree weather and snow flurries.

Many accepted the offer, though others, including Tripi, declined.

"It feels like Groundhog Day," he said, referring to the Bill Murray movie where he relives the same day over and over.