ALBANY – State lawmakers, upset about what they say are inhumane conditions at commercial dog and cat breeding operations, have devised a plan of attack: go after the middleman.

It turns out, though, that consumers are largely ahead of them.

The lawmakers’ targets – pet shops – have become a fading source for those wanting to purchase dogs and cats.

Animal lovers have largely abandoned the stores, once a standard fixture in many suburban shopping malls and downtown cores, turning to online sources to buy or adopt dogs and cats, or to local rescue facilities and small breeding operations. Pet stores with dogs and cats are largely limiting their offerings to brief adoption periods run by a rescue group.

The few stores that sell dogs and cats are in the sights of animal rights groups and some state lawmakers pushing a bill – advancing at the state Capitol – that they say will improve the safety and health of dogs and cats. It calls for banning all sales of dogs, cats – and rabbits – at pet stores in New York.

“Retail sales of dogs and cats support what we feel is a system of systemic cruelty," said Bill Ketzer, the senior director of Northeast legislative affairs for the ASPCA.

Pet stores may be the target, but animal advocates acknowledge their chief objective is cut into the finances of commercial breeding operations that are based mostly in the Midwest. To do that, they are taking the backdoor route: via New York pet shops.

“We refer to it as shutting down the puppy mill pipeline in New York State," Ketzer said.

The plan comes at a time when only 99 pet stores still operate across New York, according to the state’s agriculture department. The ASPCA says that’s down from about 450 shops 15 years ago. One national industry study recently found only 4% of dogs were bought at pet shops.

In Western New York, plenty of stores sell pet supplies and animals such as birds, hamsters and fish. But retailers selling puppies, kittens and bunnies mostly have either gone out of business or stopped selling such animals.

For those pet shops that still trade in dogs and cats, the bill will, critics say, force their closure.

“We believe people who bring up these bills do so for a noble reason. We don’t believe they want to put New Yorkers out of business or jobs. But the bill doesn’t address the breeding issues they claim to," said Mike Bober, president of the Pet Industry Joint Advisory Council, a Washington, D.C., group that represents pet shop companies, pet produce firms and wholesalers and distributors.

The trade group head says one need only look to California, which enacted a ban a year ago and has since seen multiple closures of pet stores across the state. Maryland and Maine have enacted similar laws.

For 40 years, Steve Lane was in the pet selling business. Last year, he closed his Williamsville store and became Rev. Lane, a pastor at St. Philip’s Episcopal Church in Buffalo.

“Have you seen the church’s Facebook page?’’ he asked when contacted last week.

The posts directed at Lane weren’t pretty. When he joined the church, the congregation’s Facebook page lit up with messages from people noting how he ran Steve’s Wonderful World of Pets and made money, in the words of one critic, “off the backs of innocent animals." Becoming a church leader, the person wrote, would not keep Lane from going to hell. Another called him “pure evil."

Lane says he was “harassed” daily, either online or with protesters outside his now-shuttered store. “They sent anonymous letters to my bishop and … made threats like ‘we know where you live.’ ”

“It’s not why I went out of business, but it certainly was a factor," Lane said of the protests. 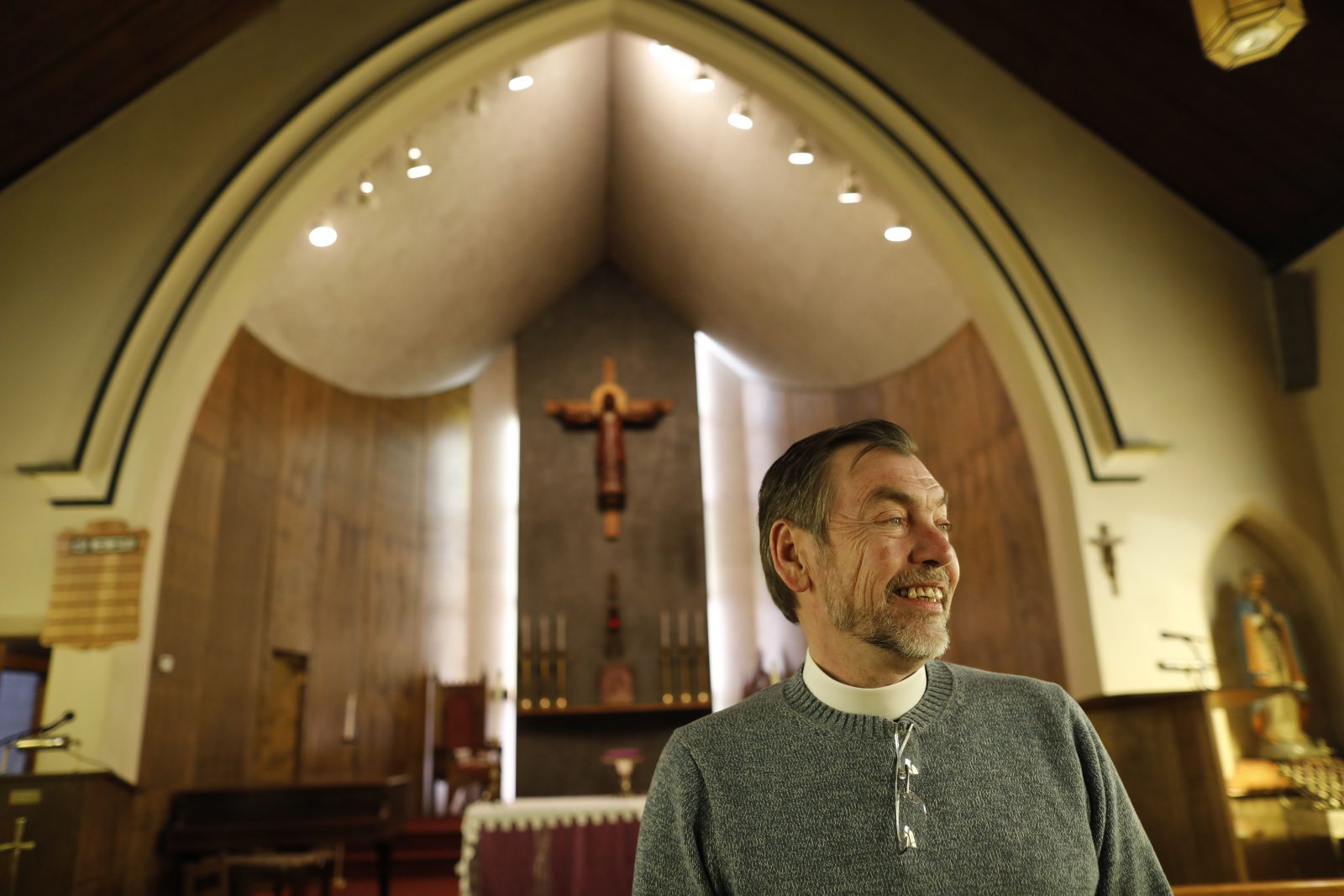 “I just think I don’t want to deal with all the pickets and PETA that Steve (Lane) had to deal with," she said. Besides being expensive to care for in the stores, where they also take up a lot of floor space, Brucz doesn’t believe dogs should be sold in pet stores.

She does sell rabbits, though, and those would be banned under the bill.

“I really don’t mind if they ban the sale of rabbits through pet stores just because there are so many rabbits in rescue,’’ she said. Brucz takes in rabbits from owners who did not realize the amount of work associated with keeping such animals as pets. Her shop also sets up space for a local cat adoption group.

Lane and Brucz agree the proposed law will force more pet stores to close. “But I don’t think they’re going to get what they expect out of it," Brucz said of the bill’s advocates.

Despite his Facebook reviews, Lane said he spent considerable money and time ensuring that the dogs he sold came from ethically operated breeders, not from puppy mill operations where animal rights groups say breeding dogs are abused during their life in cages and killed when they become ineffective.

The bill, Lane said, “will aggravate the problem it’s purporting to reduce because it’s reducing the source of quality-bred animals and for people that want animals it’s going to be more likely they’re buying poorly bred animals from unethical sources. It will work in reverse.”

Michael Gianaris owns two cats – rescue cats, he quickly points out. More importantly, he is a Queens Democrat who is the deputy majority leader of the State Senate and the sponsor of the pet store bill along with Assemblywoman Linda Rosenthal, a Manhattan Democrat.

Gianaris said consumers are being misled about the sources of dogs and cats in pet stores. “It’s simply not true that they are getting their animals from responsible breeders," he said of most pet stores in New York. Overwhelmingly, he said, the dog and cat suppliers to pet stores “are bad actors."

The senator said the state and regulators don’t have the resources “or wherewithal” to properly monitor both breeding operations and pet stores to ensure animals are being breed ethically and humanely. Moreover, the state agriculture department has no jurisdiction over the big breeding companies, located mostly in the Midwest, that he says are the source of the problem.

Animal rights advocates say there are federal laws to regulate breeders, but that the industry is far down on the pecking order of interest by federal agriculture inspectors.

The pet industry agrees U.S. Department of Agriculture rules should be strengthened to better address breeders. They note, however, that breeders and pet stores are the only federal and state licensed components and that, unlike rescue organizations, consumers can get information about the origins of a dog they are purchasing and there are certain warranties if a dog gets sick after it’s purchased. Importantly, they say, an unlicensed and illicit breeding industry will flourish if the bill in New York passes.

The sides in the debate fiercely disagree over stated facts.

Animal rights groups say there might be legitimate ways for pet stores to source puppies for resale. “They don’t want to. What they want to be able to do is … point and click, pick a dog and breed they want and then the dog arrives in a few days," said Ketzer of the ASPCA.

Buying from a local breeder, or at least a breeder whose operation they have seen and know to be ethically run, takes more time for pet stores than simply ordering a dog online from a big breeding firm, he said.

Pet stores say owners have no motivation to sell puppies bred at inhumane operations and that they are animal lovers just as much as the consumers buying their dogs, cats and rabbits.

“It’s not in their best interest to buy a sick dog off the internet," said David Schwartz, an attorney and lobbyist who serves as the spokesman for the Long Island-based People United to Protect Pet Integrity, or PUPPI.

The proposed legislation, which has been reported out of committee and is ready for a floor vote in the Senate, would allow dogs and cats to be sold through licensed pet dealers, such as breeders. But pet stores would be limited to providing dogs, cats and rabbits to consumers only if they offer such animals up for adoption in collaboration with a humane society or shelter group.

The pet stores have offered a compromise: have New York State define “puppy mill” and then ban stores from buying animals from such operations. That idea has gone nowhere, and the stores say they are up against well-funded animal rights groups with key allies in Albany.

Animal rights groups say consumers, who don’t want puppies coming from unethical sources, are driving the shift in how pets are purchased or adopted. It explains why the numbers of stores selling puppies and kittens are dwindling in New York, they say.

“They’re making different choices,’’ Ketzer, of the ASPCA, said of pet owners. Estimates, he said, are that dog and cat sales now account for only about 2% of pet store revenues nationwide.

As for pet store arguments that people don’t know what they’re getting with a rescue pet, Ketzer said consumers are savvy about animal adoptions. “I think the public understands there is a difference between buying a purebred, $5,000 puppy and adopting a dog from an animal shelter for a couple hundred dollars,’’ he said.