The last time Marv Levy was involved in Super Bowl decisions, it was a quarter century ago and his Buffalo Bills team was playing in the big game.

But this year, the Hall of Fame head coach found another way to affect the big game, and it provided one of the most poignant moments captured on camera.

Just before kickoff of Super Bowl LIV in Miami, four World War II veterans were brought on field to serve as honorary captains during the coin toss between the Kansas City Chiefs and San Francisco 49ers. It was the NFL’s way of honoring the 75th anniversary of the war and also recognizing the league’s 100th year, since all four men were 100 years old.

That moment, which Levy watched on television from his hometown of Chicago, was the culmination of a monthslong campaign launched by the Friends of the National World War II Memorial and championed by the former coach.

“I was certainly delighted to see it,” said Levy, a World War II veteran who enlisted with the Army Air Forces the day after graduating high school in 1943.

The Friends of the National World War II Memorial requested Levy's assistance last fall to help convince NFL teams — and the league itself — to recognize the 75th anniversary of the war. He reached out to some teams, as did Holly Rotondi, the executive director of the organization. Levy also spoke of it in the media, including an October appearance on Fox News and a late December interview with The Buffalo News that was published in early January.

“There were 16 million of us,” said Levy, referring to the number of Americans who served. “There are now less than a half-million still around.”

There are actually less than 400,000 World War II veterans still alive, and more than 300 die each day.

“If we don’t seek (recognition) for them, the time will just pass us by,” Rotondi said. “Our nation will miss out on this opportunity, because they’re not going to seek it for themselves.”

By the end of the 2019 season, a handful of teams had run game-day tributes or, in the case of the Bills, hosted a group of World War II veterans at a practice. Levy was grateful but hoping for more, and just before The News' story was published, he received word that the NFL might have a Super Bowl tribute in the works. He emailed The News with that tidbit of information, but full details didn’t materialize until later in January.

In an email to The News this week, an NFL executive explained what was happening behind the scenes.

“The Super Bowl Coin Toss is always a special moment and almost always reserved to honor, remember or celebrate something incredibly meaningful to America,” wrote Anna Isaacson, the NFL’s senior vice president of social responsibility. “A bunch of us in our events group and on our social responsibility team spent months thinking about how to use this moment to help culminate our 100th season. We shared different concepts back and forth trying to find one that just felt right.”

They landed on the idea of dually recognizing the 75th anniversary of the war and the 100th year of the NFL by inviting veterans who are 100 years old. 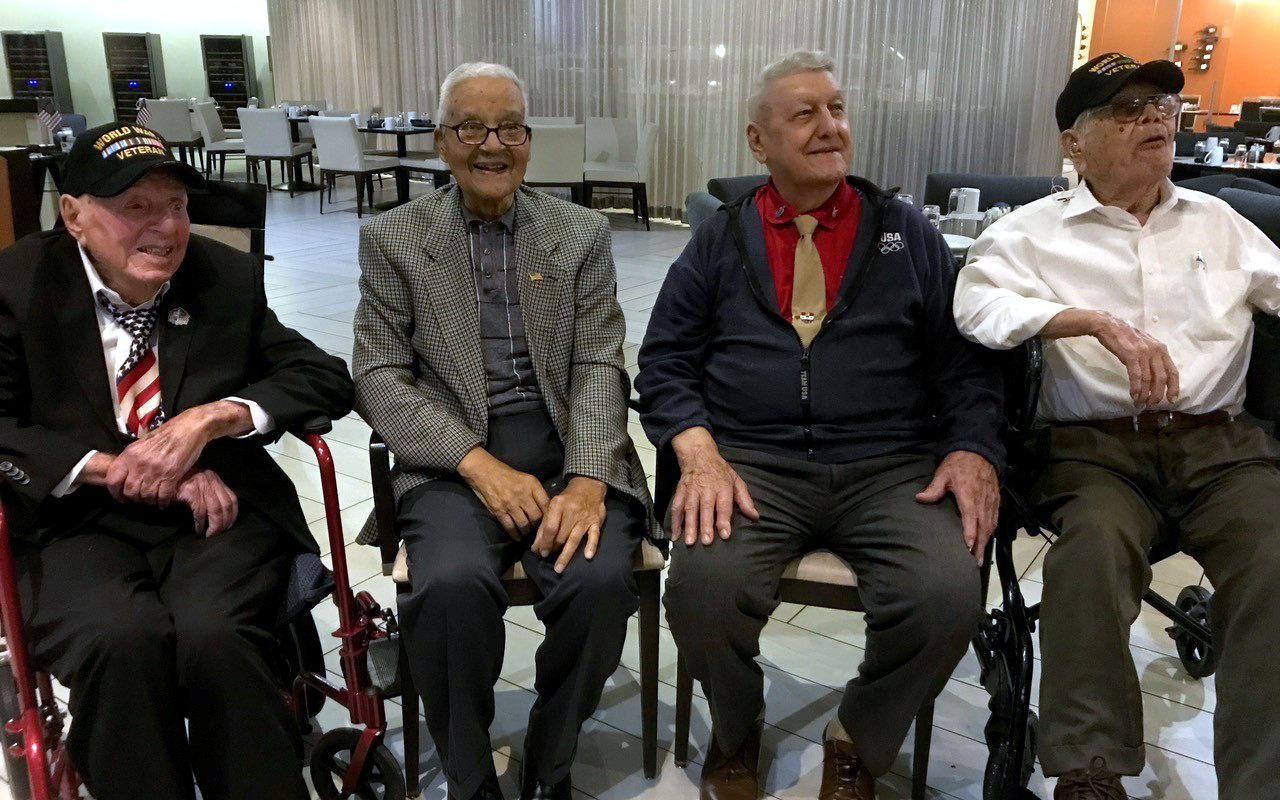 But first they had to identify those veterans. Isaacson, who had previously been in touch with both Levy and Rotondi, first reached to the Department of Defense for help, but her contacts there quickly referred her back to the Friends of the National World War II Memorial. Rotondi helped recruit three of the men, and the NFL selected a fourth. They were Staff Sgt. Odón Sanchez Cardenas, Lt. Col. Samuel Lombardo, Corp. Sidney Walton and Brig. Gen. Charles E. McGee, who flipped the coin.

During the game, the four men and their families sat in a suite with NFL Commissioner Roger Goodell. Bills Hall of Fame quarterback Jim Kelly spent time with them there, and he was one of a list of VIPs who joined the veterans. The musician Lizzo sat near them, and rapper MC Hammer stopped them for a photo.

The moment shone a spotlight on the men – and by extension, all World War II veterans – and even created a sense of celebrity. Rotondi flew from Miami to Washington with McGee, who was honored by President Trump at the State of the Union two days after the game. The former member of the Tuskegee Airmen was immediately recognizable to people in the airport and on the plane.

“The reaction was so strong,” Rotondi said. “Young people coming up to him wanting his picture taken. That moment had an impact. I’m so grateful to Coach Levy for carrying that mission forward, and pursuing it and not giving up, and making sure that it happened.”

Levy, who watched the game with his wife, Fran, at a Super Bowl party hosted by a friend, characteristically downplayed his role.

“I pushed the league a little, and they did it,” he said. “I didn’t ask them to do it at the Super Bowl. They came up with that.”

But he was elated that they did. Subtly elated. As he watched the coin toss with Fran, Levy recalled no words were spoken.

“It was gratifying,” he said. “We exchanged smiles.” 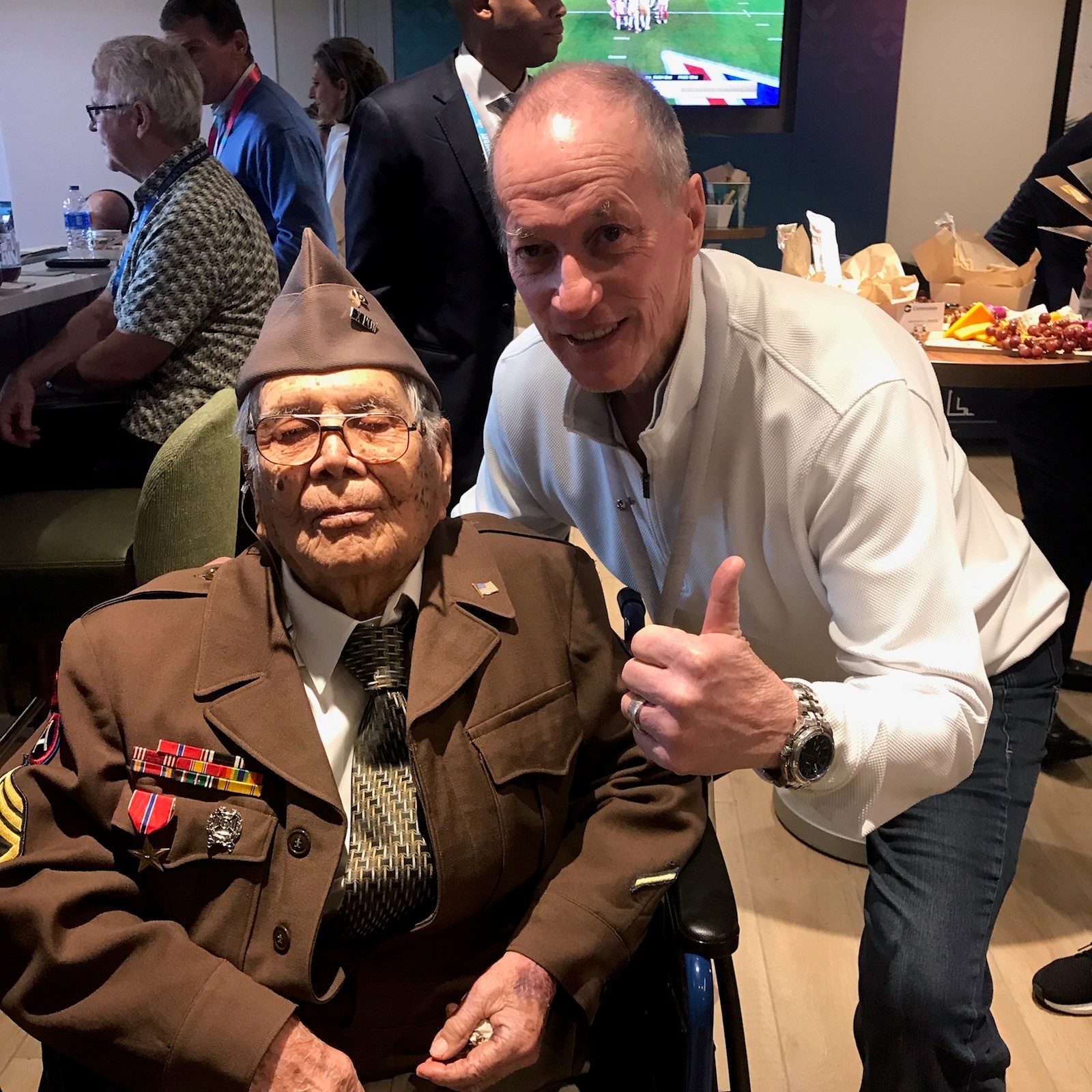