For too long, the texters of Western New York relied on water buffaloes. 🐃

Now at last they have an emoji to truly call their own. 🎉 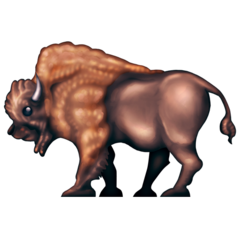 A mock-up of the forthcoming bison emoji. (Courtesy Emojipedia)

Last week, the Unicode Consortium – the international body that standardizes language on digital devices – officially approved a new bison character that will roll out to phones, computers and social networks in late 2020. Emoji keyboards have long included an Asian water buffalo, but those big-horned ungulates look little like the bisons so lovingly enshrined on the Buffalo flag, in the Bills' logo, and on the tattooed bodies of native Buffalonians across the country. (Contrary to popular usage, buffalo are indigenous to South Asia and Africa – it's the bison that roams the American West, UB North Campus and Niagara Street.)

The new character promises a far better graphic shorthand for expressing local pride. In fact, Buffalo played a bit part in the bison’s creation: Three local sports teams got a nod in the official Unicode application.

Alas, it will be several months before the emoji appears on iPhone and Android keyboards, and several weeks before curious Buffalonians can learn more about the character's origins.

To the uninitiated, emoji – those smilies and ideograms ubiquitous in texts, tweets, TikToks and a range of other applications – may look casual or frivolous. But they’re actually highly regulated by the Unicode Consortium, which sets standards for new emoji and accepts proposals from the public on a rolling basis.

Buffalo can thank a man named Alex Schmidt for this particular proposal: The self-described “writer, comedian and internet thing-maker” pitched the bison emoji last April, though he declined to answer questions about it because, he said, he’s making a podcast about the emoji process. It would not appear that Schmidt, who splits his time between Pasadena, Calif., and Durham, N.C., has any particular connection to Western New York. His affinity for bison, he wrote in his Unicode proposal, springs from childhood trips to a managed prairie in Illinois.

But in arguing the case for the bison – a “key cultural touchstone of centuries of North American life,” in Schmidt’s words  he did namedrop the Bisons, Sabres and Bills as evidence the new emoji would serve “multiple uses,” one of Unicode’s criteria for approving characters.

Unsurprisingly, the Bills were quick to celebrate the new emoji on social media, as were many of their fans. “Our tweets will never be the same,” Visit Buffalo Niagara wrote on Twitter. In a follow-up statement, the tourism group pointed out that few cities can be “represented visually” with emoji this way. (Salt Lake City🧂🚤🌆 and Corona 👑 are pitiable seconds.)

“The water buffalo just doesn't look right,” Buffalo native Aaron Zimmerman told The News by email, “especially when texting about the Bills or our city.” He’d previously complained to Apple Support about the absence of a true, Buffalo-style bison.

Already, the new character is performing fairly well, even though users don't know quite what it will look like yet. Mock-ups published by the emoji resource Emojipedia show a pixelated bison with oddly protuberant muscles, but those are just illustrations, and individual technology companies ultimately decide how to represent Unicode characters on their services.

Of the 62 new and 55 modified emoji approved by Unicode last week, the bison ranked among the top third in terms of social media reaction, said Jeremy Burge, the vice chairman of Unicode’s Emoji Subcommittee and founder of Emojipedia.

Lest that get to anyone’s heads, however, Burge said the bison was far surpassed by this release’s buzziest characters – a transgender flag and the Italian “pinched fingers” – as well as by three other animals: the beaver, the cockroach and ... the worm.

No word yet on the status of the oft-requested chicken wing emoji. There's always 2021. 🍗🔥