As predicted in my Wednesday forecast, the latest snow has been a moderate snowfall, with some pockets of marginally heavy snow (7 inches in 24 hours is the National Weather Service definition). Its impact has been significant due to timing, with the predicted slippery Thursday morning commute and the snow-covered roads for the Friday commutes. Impact forecasting takes into account the timing, meaning had this snow fallen on a weekend day it would have affected far fewer travelers. In addition, I had used the phrase “limited blowing snow with no whiteouts,” and that makes quite a difference for lessening impact as well.

Snowfall amounts as of early Friday were actually light in most locations, having been held down by the mixture and freezing rain forecast for Thursday afternoon and evening.

These amounts will finish up higher, of course, with the steady morning snow from the early hours adding several inches.

You’ll note a modeled narrow band in dark blue of heavy snow was well to our east, in Central New York up into the Adirondacks. The rate of snowfall will gradually diminish in the afternoon, as you can see by the lighter blue and reduced areal coverage.

So, snowfall totals won’t be overly impressive. In the modeled totals for Friday (not including Thursday totals), most amounts are light. If you look very carefully, you may see a few thin tendrils of dim purple, where totals will run higher, including some locations closer to Lake Ontario, especially in Orleans County. There, some lake enhancement has been occurring with the breeze off Lake Ontario, along with the county’s closer proximity to the storm center to the east.

There also will be more snow on the Chautauqua Ridge, inland from Lake Erie, where north to northwest winds will lift moisture over the higher terrain, as well as on many of the hills in ski country. On these highland locations, I expect storm totals to reach or exceed 7 inches and the same could be true closer to Lake Ontario in Orleans County. The snow will be winding down Friday evening, lingering longest on the hills to the south. Storm totals for the two-day event shouldn’t look much different from model totals seen in the European/ECMWF as of late Friday night. 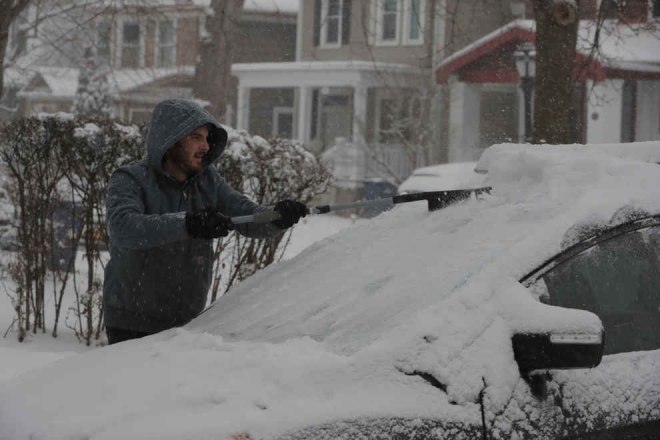 The resolution of such a global model can’t pick up small pockets of heavier amounts on individual ski slopes. Speaking of which, let’s take our weekly inventory of ski conditions for the weekend. Skiers, keep in mind we are turning colder now, meaning this is the first week I can write the slopes will get some beloved fresh powder, which has been absent most of the winter.

There is an important caveat here. These conditions really reflect how things were prior to the new Friday powder. In other words, if you head to the slopes Friday night into the weekend, conditions will be better than listed as of this article’s writing. So you can check in on that link later on see the new, improved conditions that will show up in updates. Even on Friday morning, here is a sampling of how things looked on some of the slopes.

There will be some scattered snow showers around on a very cold Saturday. Temperatures will only reach the low 20s at lower elevations, and stay in the teens on the slopes. Fortunately, wind chill will be modest. On Sunday, temps will edge up to the low 30s, with limited sun part of the day and a south-southwest breeze of 10 to 15 mph. Sunday evening will bring a round of steadier light snow that could produce a couple of inches of accumulation and some possible slick spots for the Monday morning commute.

After that little system, there are no current signs of major storms approaching our region next week, though we may have brushes with lighter snow by Thursday and Friday. Daytime highs will run a little above the average of 32 Monday into Thursday, with a colder air mass returning at the end of the week, as seen in this National Weather Service forecast:

This cold air from the north central U.S. across into northern New England would still be labeled as “seasonably cold” rather than bitter or extreme. The upper air pattern continues to include a polar vortex that has been consistently strong and located closer to the North Pole. That tends to keep the coldest air bottled up in the polar region and doesn’t allow it to dip far south into the lower 48. A weaker polar vortex would have a tendency to sag southward and allow more polar incursions. Long-range specialist Judah Cohen has tweeted a temporary weakening of the polar vortex, which goes on to restrengthen and pull back to the top of the world in fairly short order.

Now that the #PolarVortex (PV) has weakened back to normal GFS is predicting that the PV will once again strengthen pulling all the cold air in the stratosphere into the Arctic. At this rate the Final Warming won't happen until July! RIP #winter 2019/20. pic.twitter.com/gUhpZKmpvl

If you watch the animation, you may notice it drops a cold shot back into the northern U.S. for a couple of days around Feb. 21-22 but, as has been the case all winter, there is no staying power. Ahead of that possible short colder period, there is still warm ridging in the East and only modest chilling in the West, as seen in the ECMWF upper air ensemble mean a week from this Sunday.

As of Thursday, this young month has been much (7.4 degrees) milder than average. That anomaly will take a hit from Friday through Sunday. Seasonal snowfall for Buffalo should finally pass 50 inches by Friday evening, around 15 inches below average for the season. Reflective of the prevailing milder temperatures, Lake Erie remains at 36 degrees, 4 degrees above the average of 32 for this time of year. Understatement: I see almost no chance Lake Erie will come close to freezing over this year. In fact, here is Great Lakes ice coverage as of Thursday: 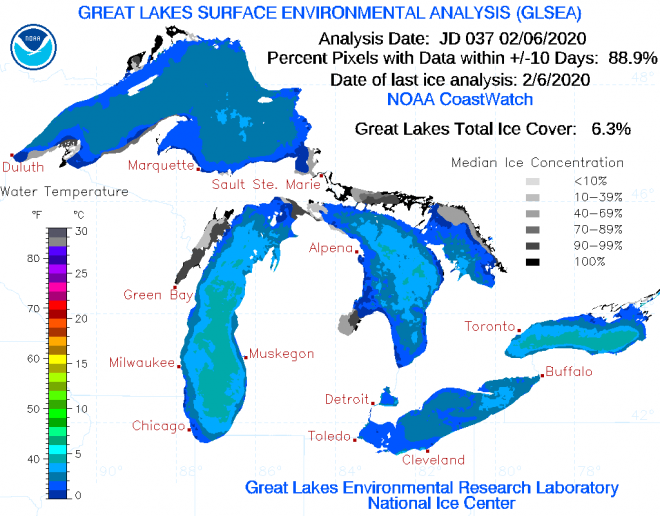