Daniel Reininga still thinks back to where he was standing in early January: atop Mount Kilimanjaro, Africa's highest peak, more than 19,000 feet above sea level.

He has returned to his everyday job, as president and CEO of Lake Shore Savings Bank, in the comparatively flat terrain of Dunkirk.

Reininga, 61, is an experienced climber, having summited Mount Whitney and Mount Rainier. His latest adventure took him to Tanzania with one of his sons, Alex.

Father and son were among a group of 20 climbers, supported by 90 porters and cooks, who climbed for WorldServe International, a nonprofit that promotes clean drinking water in East Africa, and Africa 6000. Reininga's group is aiming to raise $50,000 to pay for a solar-powered water well for members of the Maasai tribe. The group is more than halfway to its fundraising goal, which the members hope to reach by year's end.

It took Reininga's group six days to reach the top of Kilimanjaro and descend. They endured changing terrain, falling temperatures and thin air. Altitude sickness is a threat to climbers. Five of the 20 people in Reininga's group didn't reach the summit.

Reininga displayed a Lake Shore Bank banner at the top and brought home a wealth of memories from nearly 8,000 miles away:

Q: What was it like at the start of your climb?

A: You're walking through the rainforest and vegetation, and on and off sprinkles at times, slowly starting to ascend. That was at 6,400 feet. That was about a four-mile hike, three to four hours. Every time we got into camp, it was about 1 o'clock [in the afternoon]. We were met by our porters who had scurried ahead of us with all the gear, and they were in full song and celebrating our arrival.

Q: How did you adjust to the thinner air? 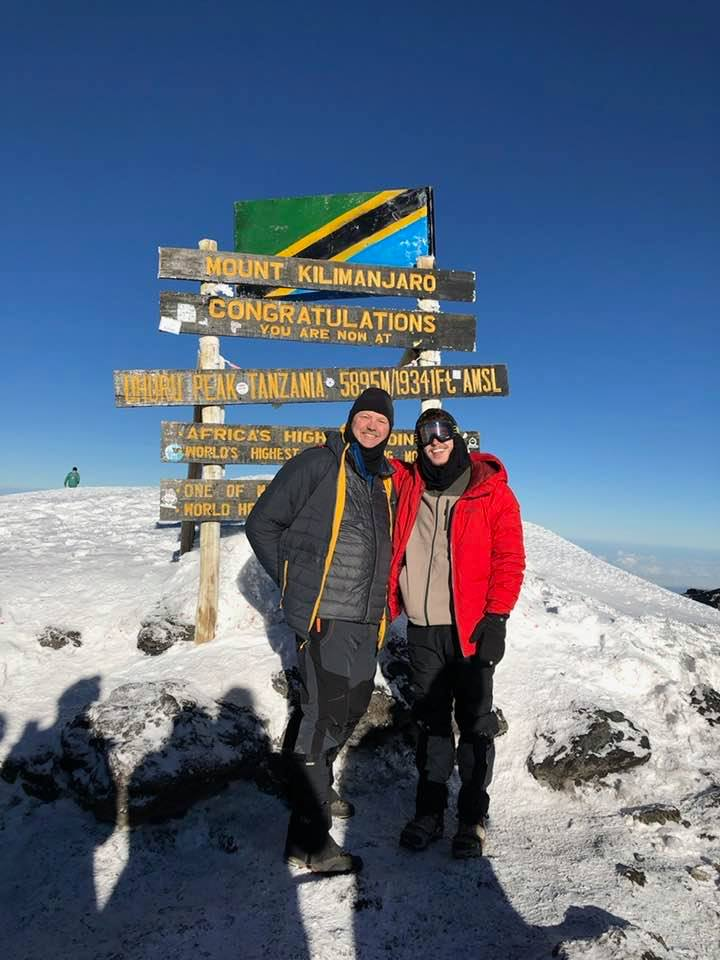 Q: How did conditions change as you ascended?

A: You get up through vegetation that starts to get waist high, and then pretty soon there's no vegetation whatsoever. At nighttime, it was chilly, very cold, glad to have a down-filled sleeping bag. We actually had snow the evening prior to our summit attempt. It got very cold, down into the 30s easily. Some nights it rained. We actually walked in the rain several times. You could see it coming across the mountain plains, so you could prep appropriately for it.

Q: What was it like on the day you ascended to the peak?

A: We climbed to the 19,341 [feet mark] starting at midnight. We went to the Uhuru peak. There are three separate peaks up there. The route that we took actually took us to Gilman's Point [at 18,652 feet]. For the next hour, we walked along the crater rim in various precarious points, hitting the second peak and then ultimately the third peak, for the 19,341. We reached there at 7:30 in the morning. We watched the moon set on one side of the crater, and the sun rise on the eastern side. It was absolutely spectacular.

Q: How long did you spend at the summit?

A: We probably spent 10 minutes at the summit. We took some great pictures of our team, I unveiled the Lake Shore Savings Bank sign and got a picture. ... There's quite a few people there, so you kind of had to stand in line for your chance to get a photo. There's three different ways to get to that summit, and people are coming from all directions.

Q: How did you feel being at the top?

A: It was euphoric. It was mind boggling to be on the top of one of the world's seven summits. The surrounding landscape was spectacular. Beautifully clear day. Some clouds way out on the horizon. You actually saw a lot of snow on the top.

Q: Which was the bigger challenge climbing Kilimanjaro: the terrain, or the altitude change?

A: This is very intense with the altitude. It's really a mind game, because you start off and you're walking for four days before you even get to where you're going to summit, as it gets bigger, and bigger, and bigger. And then you realize it's another three and a half miles to the top. … The leadership lessons are mind over mountain, all day pace, attitude determines your altitude – things like that that make a huge difference.

Q: What was it like to return to your Lake Shore job after this experience?

A: Every time I come back from something like this, I realize the awe-inspiring creation that God gave to us in this world, and what a great, great moment to be able to serve and give back in any way that's fitting from your own personal perspective.  ... I still sit here and I think, whoa, what more can I do? That's something I want to do, more for the folks of the Maasai tribe.

The bank supported the climb unbeknownst to me. ... The whole team of 120 employees blessed me with a package to go, and they raised money and made a contribution to WorldServe on my behalf. And then the board of directors through the directors' fund designated a substantial fund to the WorldServe event to support the Maasai tribe and their need for water.