For more than 40 years, Mary Brennan-Taylor has collected art and memorabilia connected with the struggle of American women to win the right to vote.

Their struggle came to fruition 100 years ago, with the ratification of the 19th Amendment that allowed women nationwide to vote.

The history of the fight and art depicting it are the focus of an exhibit that opens Sunday in Lockport's Kenan Center, spreading across  two floors of the historic mansion.

"The Art of Suffrage: Struggle, Sacrifice and Success" is built around Brennan-Taylor's collection, along with material from the Library of Congress, the National Archives and other sources.

Among the exhibits is a life-size steel jail cell by Rapids craftsman Jeff Roszman that evokes the incarceration many suffrage activists endured after they disrupted public events or when opponents disrupted their own events.

Alice Paul, a suffrage movement leader, gave pins looking like jail cell doors to 168 women who were jailed during the suffrage fight.

A replica of the pin is on display, but it's one of the few replicas in the show. Many of the exhibits are artworks and newspapers and magazines from more than a century ago.

"These are not reproductions. These are the real thing," said Brennan-Taylor.

"You'll see lithographs and pen-and-inks, and some of the early pieces were not supportive. They were really kind of demonizing," Brennan-Taylor said.

Mary Brennan, when she was a senior at Lockport High School, wrote a letter to Paul in 1976, and the elderly activist, who was living in Richfield, Conn., wrote back.

Brennan-Taylor said her mother drove her to Connecticut to meet Paul, who died in 1977. Their correspondence is on display in the exhibit.

"I was just so inspired by her, her bravery and her unrelenting belief in a goal and seeing it through. From that point forward, I have just been fascinated by the women's suffrage movement," Brennan-Taylor said.

She said she has no idea how much she's spent building the collection. 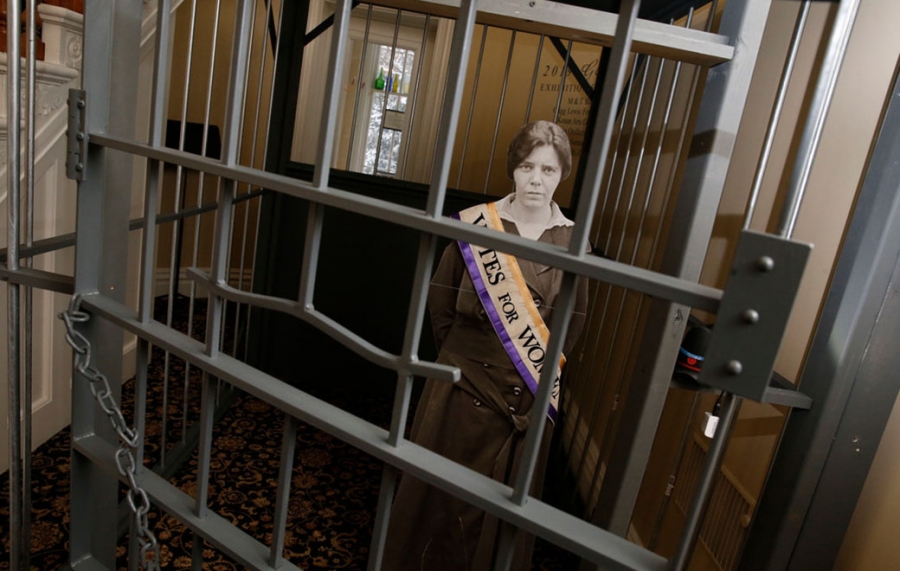 A lifesize photo of an imprisoned woman in a jail cell is on display in the "The Art of Suffrage" at the Kenan Center. (Robert Kirkham/Buffalo News)

The exhibit includes a large painting of Paul by artist Craig Thomas. Ellen Martin of the Lockport Public Arts Council said Thomas produced the painting on a sheet of plywood when he visited Lockport last summer to participate in the city's annual chalk art festival.

The painting bears the quotation, "It only takes one woman."

The quotation came from Emily Davison, a British suffragist who ran onto the track during the 1913 Epsom Derby. She was fatally injured when she was run over by a racehorse owned by King George V.

Davison and other British suffrage leaders met with Paul in England.

"That's where she got her radical strategy," Brennan-Taylor said. "She went back and she really set the world on fire when she got back here. She had that militant strategy that was sort of in your face. She wasn't violent and she wasn't crass, but she was strategic."

She credits Paul with re-energizing the American suffrage movement after its famed 19th century leaders, Susan B. Anthony and Elizabeth Cady Stanton, had died.

The exhibit includes a giant blow-up of the front cover of the program for Paul's suffrage parade in Washington the day before Woodrow Wilson's 1913 presidential inauguration.

"She knew that there would be kind of a violent reaction, which played right to the photographers, as people were ripping banners out of hands and beating up the suffragists. A hundred of them had to be hospitalized," Brennan-Taylor said. "The cops actually stood back and let it happen."

Some states allowed women to vote in the early years of American independence, but by 1807, all of those states had canceled that right.

"It was a bit of misogyny on the part of society at the time," Brennan-Taylor said.

But in the late 19th century, the tide began to turn. Wyoming went first, allowing women to vote in 1869, before it became a state.

By 1912, every state in the Mountain and Pacific time zones, except New Mexico, allowed women full voting rights. But only five states east of the Rockies did so before the 19th Amendment was ratified in 1920.

One of them was New York, which passed a women's suffrage amendment in 1917, after the same measure had been defeated two years earlier.

Statewide, men, who were the only ones allowed to vote on the amendment, approved it by a margin of 102,000 votes out of 1.3 million cast.

In fact, Brennan-Taylor said, women were among the strongest opponents of female suffrage, "especially in the South."

The exhibit opens with a reception from 2 to 5 p.m. Sunday in the Kenan House Gallery, 433 Locust St., Lockport. The exhibit is open daily until March 29, from noon to 5 p.m. weekdays and 2 to 5 p.m. on weekends. Admission is free, but a $5 donation is suggested.

During the exhibit, the Kenan Center will offer talks Feb. 28 and March 7 by authors of books on the suffrage movement, as well as a one-woman show portraying Susan B. Anthony on March 21. Details are available at the Kenan website.