Beauts forward Taylor Accursi has scored a team-high 15 goals this season, and after each, she has made sure to celebrate.

She’ll pump her arms, raise her skates and stick, hug her teammates and jump into the glass surrounding the rink in jubilation, firing up not only her teammates but those in attendance.

The gestures have earned her the nickname "Celly Queen" around the National Women's Hockey League.

“Oh, my gosh, I love it; it’s awesome," she said of the moniker. "You get fans that come up to you after games or sometimes between periods they’ll yell, ‘The Celly Queen.' ".

“Alexander Ovechkin, he gets a lot of goals and every single goal he carries the same excitement," she said. "I kind of took that from him and put it into my game and it’s been fun. Every single goal I feel the need to 'celly' hard.”

Her next chance to celebrate will come this weekend as she is part of the NWHL All-Star festivities. She will compete in her first NWHL All-Star Game at 2:30 p.m. Sunday at Warrior Ice Arena in Boston and the All-Star Skills Challenge at 8 p.m. Saturday.

Accursi, tied for third in the league in goals, and Beauts teammates Marie-Jo Pelletier and Mariah Fujimagari will play for Team Dempsey, while Corinne Buie, Brooke Stacey and Lenka Čurmová will dress for Team Packer. Boston's Jillian Dempsey and Metropolitan's Madison Packer are the top two scorers in league history and have drawn captain duties.

WATCH: We can tell who scored the first goal of the game just by the celly! @Accursi6 finds the rebound and goes top shelf to put the @BuffaloBeauts up 1-0 over the @CTWhale_NWHL. Join us for our live stream on @Twitch!

The Beauts resume NWHL play on Feb. 15 and 16 against the Metropolitan Riveters, when they'll look to snap a seven-game losing streak.

As one of just three players returning to Buffalo’s lineup this season, Accursi has seen her role expand beyond celebration royalty to assistant captain, or, as she said, "A is for Accursi."

“Being put in that role, I think, has really helped the team overall and even myself, it shows me some characteristics that I not necessarily would have known had I not been put in this role,” Accursi said.

Accursi has played a career-high 18 games this season after playing 13 last season and 15 the season before. She already has career highs in goals and assists with eight. 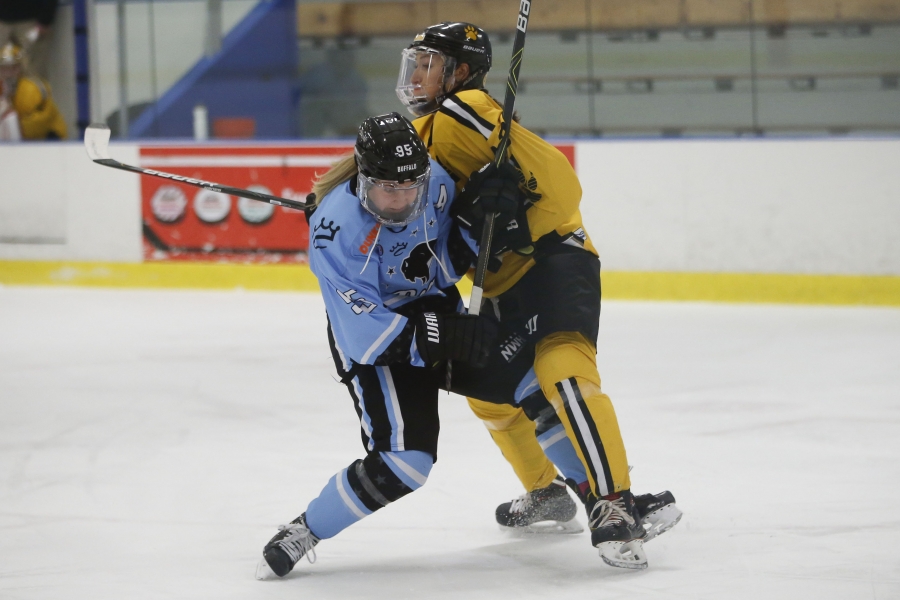 In a conversation with The Buffalo News, Accursi shared more thoughts on the All-Star weekend, the Beauts, the league and her celebrations.

Q: Are you looking more forward to the game or skills competition or maybe both?

A: Honestly, I’m looking forward to the entire weekend. The skills stuff will be fun. That’ll give everybody the ability to meet and talk to each other. Then the next day’s all business, you know? Both teams want to win.

Q: What’s the dynamic of the team been like through the first portion of the season?

A: Honestly, the beginning of the year it was kind of like the organization as a whole hasn’t even lost a step. I know a bunch of players didn’t come back, but the players that are new and decided to play have definitely stepped up into a role that not only represents the Beauts organization, but the NWHL as a whole. It’s been fun that way.

Q: What’s it been like working with some of the new players, especially those who might not have had as much professional women’s hockey experience coming into the season?

A: It’s almost like a family atmosphere, so especially working with some of the newer girls has been fun. There’s no team problems; everyone’s really close.

Because we’ve had this awkward month off, everybody’s just trying to get that much-needed rest they need to move forward. The rest of the season, it’s super, super important and especially as we roll into playoffs when it’s a one-game series where if you win you’re win and if you lose you’re out, so we have taken a lot of time to prepare for those within the last couple weeks.

Q: Have you had the opportunity to do many team bonding activities?

A: We’ve had practices held and that sort of thing, and a lot of the girls in Buffalo work out together and hang out outside of the rink, too. It’s not that we see each other at the rink, which is what helps having that family atmosphere.

Q: What are you hoping for in the first games coming out of the break next week?

Q: Do you have a particular favorite celebration you like to do or do you like to mix it up a little more?

Honestly, it all depends on the goal. Whatever I feel in the moment, I don’t think about it before the game like, ‘What am I gonna do?’ I just live in the moment. Whatever comes out, I just let it come out.

Q: Obviously, the league looks a lot different this year without a number of players. What are your thoughts on where things stand?

A: As far as the league, I think there have been a lot of extremely positive changes, and it’s really good for women’s hockey and being able to grow the game. I’m definitely happy and honored to be part of such a great opportunity to be an athlete that is able to work towards something that’s a lot bigger than myself and the team to build such an organization where the younger generation is going to be able to play in.

As far as my team, I think if everybody focuses on their strengths and to their next few games, the rest of the season will be successful and I am really excited for the opportunity to compete again for the Isobel Cup.