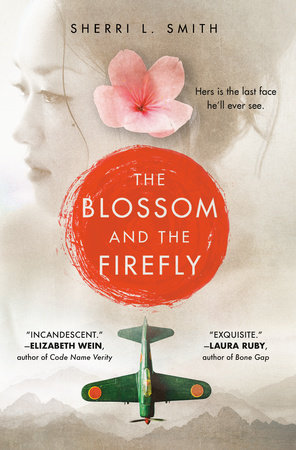 Gifted author Sherri L. Smith (author of "Flygirl" and "Pasadena," among others) weaves true magic in this marvelous novel set in Japan in the waning days of the Pacific War. It's a beautifully written, gripping work of historical fiction, combining a bittersweet love story with an illuminating portrait of wartime Japan and a meditation on the horror of war and the transformative power of love and music.

Smith was inspired by a photograph of Japanese schoolgirls holding cherry blossoms in their arms, smiling and waving goodbye to young pilots departing on kamikaze missions from Chiran's Army Air Force Base on Kyushu, the last in the chain of Japanese home islands above Okinawa. (The Chiran Peace Museum is dedicated to the 439 tokko pilots, many of them teenagers, who flew their kamikaze missions from the base.)

She alternates the narration between "the blossom," a 15-year-old schoolgirl named Hana, and the "firefly," a 17-year-old tokko pilot and accomplished violinist named Toro.  Hana, daughter of a tailor, is still bruised and traumatized by a near-death experience: she was buried in dirt for an hour when a trench collapsed after the Allies bombed a farm field where she was working with classmates. ("I am an in-between girl since the day I died beneath the sweet potato field. I am a moment in time, trapped like an ant in sap.") Now the schoolgirls  have a new assignment: sending off the tokko pilots. The girls wash the boys' clothes and sheets in the river, mend their underwear,  serve them meals and wave goodbye as they leave on their missions to "body-crash gloriously." Toro, the son of an aeronautical engineer, has loved the violin since he first heard one played at age 5. But Toro believes he is ready to die – until he meets Hana.

Smith's writing is poetry: "Inside all is silent but for the chirping of birds and the susurration of the wind." She offers vivid characters and fascinating detail about World War II Japan as defeat neared: the growing unease, the casualties, the abbreviated training the pilots got to save fuel, the dwindling food supplies (she beautifully describes Hana and her mother preparing a special meal for Toro with what little food they have). Most fascinating is the depiction of the Japanese experience of the war. For Toro and Hana, Japan had been at war for their entire lives. "Japan had been hungry; now it feasted, and still its belly growled." At Pearl Harbor "it began a new sort of war... one that has grown to swallow the world." 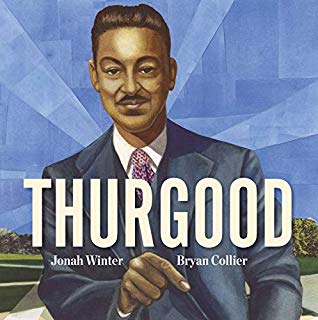 Every page of this excellent picture book biography of  Thurgood Marshall opens to a striking work of art by award-winning illustrator Bryan Collier. The dramatic, vibrantly colored illustrations, in watercolor and collage, bring to vivid life the story of the civil rights giant, a precocious child and "born lawyer" who at age 6 convinced his parents to legally change his name from Thoroughgood to Thurgood.

In the span of 40 pages Jonah Winter offers a passionate portrait of Marshall tailored for his young audience, touching on the formative influences of Marshall's experience with discrimination growing up in Baltimore.  He attended a blacks-only high school which had no library gym, or cafeteria and was so overcrowded, half the students attended in the morning and half in the afternoon. "From a classroom window, Thurgood could hear the sounds of white cops beating confessions out of black suspects in the police station across the street. This was the world he was born into: a world where black people had few legal rights." His father took him to trials to watch lawyers argue cases and then would engage him in arguments at dinner over the points of the trial.  The star of his college debate team, Marshall made his mark as "the loudest talker, funniest joke-teller and best arguer of them all." Barred from attending law school at the University of Maryland because he was black, Marshall attended Howard University "where he would hone himself into a one-man weapon to destroy the laws that hurt black people." Marshall went on a road trip to the Deep South with his mentor, civil rights lawyer Charles Houston, to study segregated schools.  His first major legal battle was a victory against the University of Maryland over its refusal to admit black students, and he went on to win 29 cases before the Supreme Court including Brown v. Board of Education before becoming the nation's first black Supreme Court Justice.  An author's note at the end adds more information about Marshall's work defending black defendants in criminal cases, his fight against lynching and the battle that raged over his nomination to the Supreme Court by LBJ. Collier's dedication reads: "For everyone - may you be inspired to seek truth and find courage, and like Thurgood Marshall, prove to the world that justice is what love looks like in public."