Frankly, if MusicalFare invited us out for an evening of music by pianist extraordinaire George Caldwell and the rest of his quartet – bassist Sabu Adeyola, guitarist Mike Moser and an incredible Rodney Harper on drums – the night would be well spent. Hearing them with performers Zoe Scruggs and Ember Tate, both starring as blues legend Alberta Hunter? Well, now you're really cookin'!

Which brings us to "Cookin' at the Cookery," the musical devised by theatrical producer, playwright and performer Marion J. Caffrey to showcase Hunter's successful and unusual career. The show gives us a bare-bones bio: Born in 1895, Alberta started singing as a young teen, began writing songs and made her name in the 1920s first in Chicago and then in New York before finding a new audience in Europe in the 1930s.

She returned to the U.S. before the start of the war and, after some USO tours and other gigs, she traded her microphone for a nursing cap in the 1950s, when she was 60 years old. She returned to singing 20 years later.

Tate is an energetic young Alberta and also picks up most of the supporting characters in Hunter's life: the club owner who coaxes her into a  successful comeback when she is 82; the girlfriend who helps Hunter realize she wasn't meant to be married; and even Louis Armstrong, for a fun Satchmo/Hunter duet in "Do You Know What It Means to Miss New Orleans?" 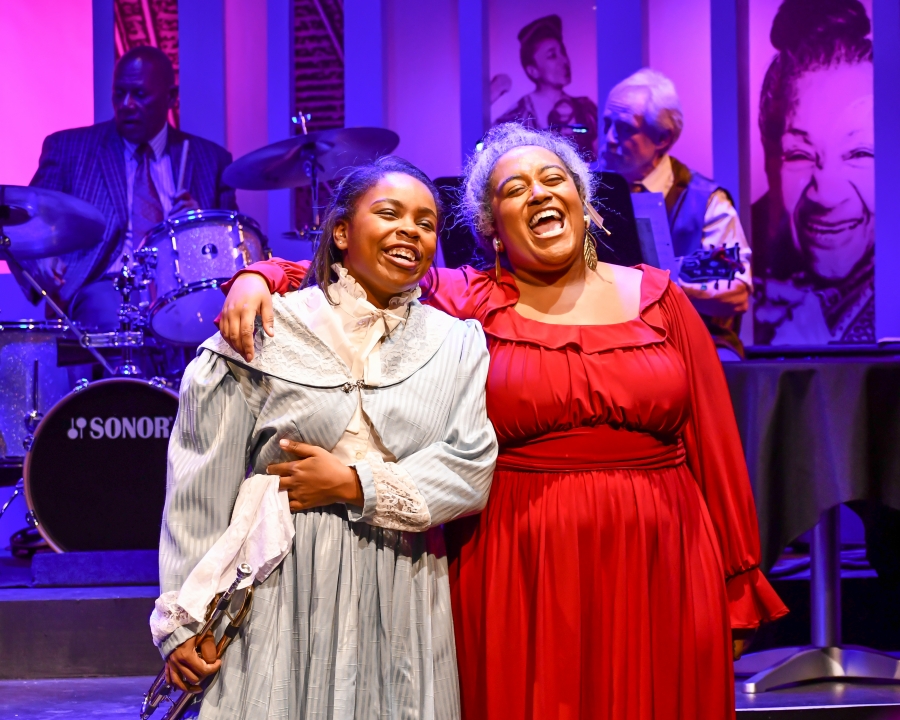 Ember Tate, left, who plays multiple roles, and Zoe Scruggs star in “Cookin at the Cookery.” You can see guitarist Mike Moser and drummer  Rodney Harper behind them. (Photo by Bethany Burrows)

The show, however, belongs to Zoe Scruggs, who we see as "old" Alberta and the de facto narrator. Scruggs, gray-wigged and granny-gowned, gives us a singer full of life and sass, a woman whose body may have aged but whose spirit bends to nothing. The way she shimmies and smiles while belting out the raunchy lyrics of "My Handy Man" — a sexy lesson in double entendre housekeeping — makes it clear the fire is still burning. Other standouts are Hunter's own "Down-Hearted Blues" and "St. Louis Blues."

When she isn't playing an octogenarian blues singer, Scruggs has her own music career under the stage name Curtis Lovell. Knowing what she sounds like as herself  — smoother, higher, younger — makes you appreciate even more her rich, throaty tribute to Hunter's laid-back style. 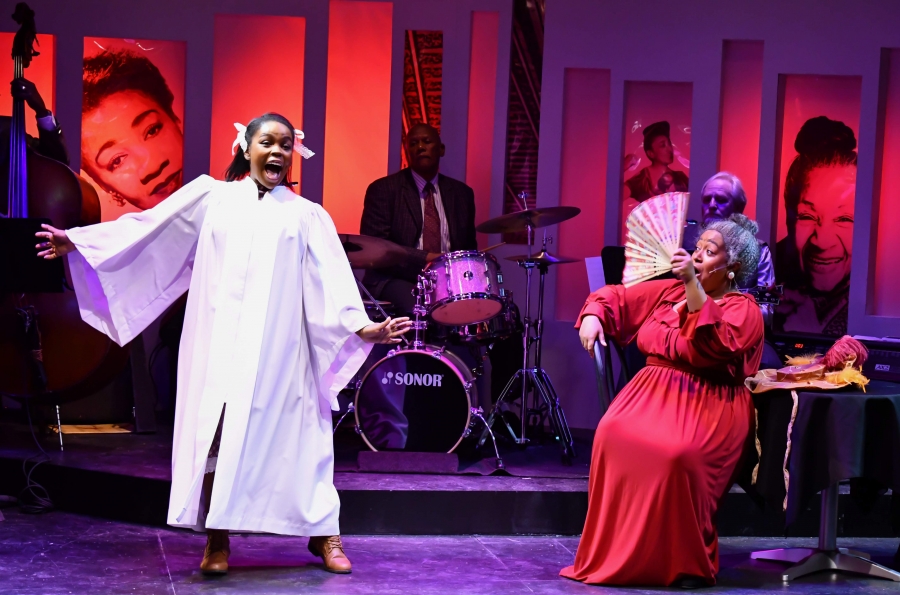 The energy is palpable in this photo of Ember Tate, left, and Zoe Scruggs in “Cookin at the Cookery.” (Photo by Bethany Burrows)

The musicians get a prominent place in Dyan Burlingame's elegant set, which makes for great listening and puts them within easy reach when Hunter wants to chat with her band. There always is the sense that everyone is right where they should be, revealing the sure hand of director Victoria Perez in guiding the action fluidly around the nearly two dozen songs that are the show's centerpiece.

Chris Cavanagh does a splendid job underlining the mood with sound and lighting, as usual, and make-up designer Susan Drozd and costumer Kari Drozd somehow added 50 years to Scruggs' age without making her clownish.

Alberta Hunter continued performing until shortly before her death at age 89, and found her place in the Blues Hall of Fame in 2011. During her life she was known in the entertainment community but not as famous as others, so don't worry if you don't know her music. Now is your chance.

Presented through March 8 by MusicalFare in its theater on the Daemen College campus, 4380 Main St., Amherst. Tickets are $47 at musicalfare.com.  It is about 2 hours with intermission.