A self-proclaimed Lockport white supremacist said he defied Cheektowaga police after they charged him with littering for tossing Racial Nationalist Party of America literature onto lawns and driveways.

Karl Hand said he was so upset over the ticket that he returned to Cheektowaga, before his trial last November, and distributed more of the literature.

"I called it my day of defiance," said Hand, who was found guilty of littering and fined $300 plus court fees.

Although the known distributions of white supremacy fliers in Western New York are still relatively small, Hand is not alone in this effort.

The Anti-Defamation League maintains an online map of incidents it says involve hate-motivated acts of aggression and dissemination of white supremacy propaganda. According to the map, there have been more than two dozen incidents in which white supremacy material was distributed in the Buffalo Niagara region since 2016.

While experts say there is an increase in this type of activity locally and nationally, it is not known how many people are involved in local white supremacist organizations.

Even Hand says it is hard to estimate how many Western New York people are in the white supremacy movement or share in his views because there are so many different groups with different takes on the ideology. He said people are unwilling to be counted among these groups because they are "scared of the FBI" and “stigma that goes with it.” However, he said the Racial Nationalist Party of America, which he founded and describes as a white supremacist organization, has members in 11 states.

“It is very loose. It is not monolithic,” Hand said.

In Buffalo Niagara, there are three “hate groups” listed on a Southern Poverty Law Center online map. They are Hand's group, the Racial Nationalist Party of America in Lockport, and two others, the Catholic Family News/Catholic Family Ministries in Niagara Falls and the Buffalo chapter of the Nation of Islam, both of which are identified as anti-Semitic.

The Southern Poverty Law Center identifies 47 groups statewide and 1,020 nationally that are either independent hate groups or chapters.

"The majority of extremists out there are not card-carrying members of any kind of organized extremist group. We frequently refer to them as unaffiliated," said Chris Magyarics, a senior investigative researcher with the Anti-Defamation League's Center on Extremism. "Many of the violent acts that are committed are done by lone wolves or small cells but not at the behest of a group."

U.S. Attorney James P. Kennedy Jr. offered a similar opinion, but added he is willing to go after those who break the law.

"The research I have seen suggests that large numbers of extremists, weary of the social costs rightfully associated with affiliation with such groups, are leaving these organized groups in order, sometimes literally, to strike out against those for whom they harbor some hate or bias," Kennedy said. "While hate is always contemptible, when it becomes criminal we act."

Niagara Falls resident Jeffrey Richards was arrested a year ago on federal charges of possession of a bomb, guns and drugs at his apartment. Prosecutors describe him as a self-proclaimed white supremacist who also possessed white supremacist literature and Nazi regalia. Richards, who is being detained at the Niagara County Jail, has pleaded not guilty and is awaiting trial. His attorney and relatives say he is not a white supremacist.

Buffalo FBI spokesperson Maureen Dempsey declined to comment on the extent of white supremacy activities in the region, but said federal agents' focus is not on membership in particular groups "but on individuals who commit violence and criminal activity constituting a federal crime or posing a threat to national security." 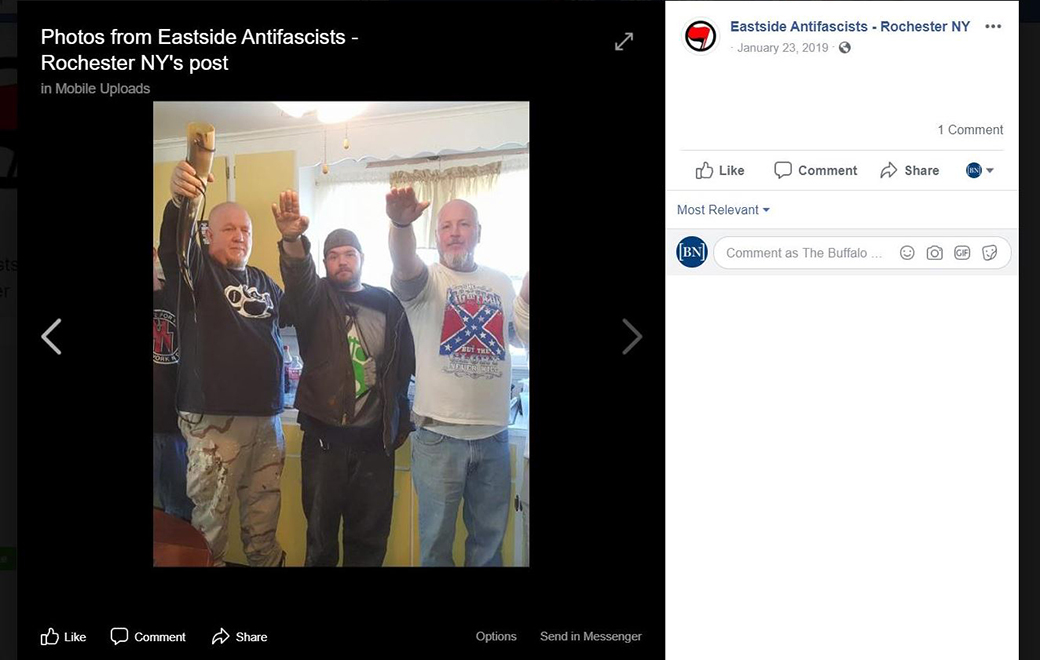 A photograph posted on the "Eastside Antifascists - Rochester NY" Facebook page shows Horace Scott Lacy, wearing a Confederate flag shirt, and Jeffrey Richards raising their arms in a salute. Todd Biro is pictured next to them raising his arm and holding a Viking horn.

When it comes to the uptick in the distribution of white supremacist literature, public officials and police are responding to it not only in Cheektowaga.

Last summer, elected officials in the Tonawandas issued a statement condemning the Ku Klux Klan and other white supremacists for distribution of literature and recruitment efforts.

In March 2017, Horace Scott Lacy, an acquaintance of Richards, received a warning from Lewiston police that he could be issued a ticket for littering when he was distributing white supremacist material.

"He was putting it in zip-lock bags and throwing it onto people's driveways," Lewiston Police Chief Frank Previte said. "We had examined the material in conjunction with the Niagara County district attorney and determined it was protected under free speech."

Lacy comes from Texas and has been identified by the Anti-Defamation League as a white supremacist with ties to the Aryan Renaissance Society. He stopped distributing the material after he received the warning, the chief said.

Lacy said he discontinued distributing fliers in Lewiston "out of respect" for the chief, but continued his distribution efforts elsewhere. In April 2017, he attended a pro-Trump rally in downtown Buffalo with Richards and another acquaintance, Todd Biro, a Town of Niagara resident who says he is active in the White Lives Matter movement and calls himself a "white separatist."

The Southern Poverty Law Center describes White Lives Matter as a neo-Nazi group and a racist response to the Black Lives Matter movement.

A photo Biro provided to The New shows him and Lacy at the rally. Biro is holding up a handful of "White Lives Matter" fliers. Biro said he and Lacy distributed the fliers at the rally.

Lacy describes himself as a member of the white supremacy movement, but said as an individual he does not consider himself "superior" to every other individual.

He says he lived in the Niagara Falls area for a year, before returning to Texas more than two years ago.

The distribution of fliers and other material in neighborhoods and public places, such as college campuses, is a proven method for white supremacists to spread their message, according to Magyarics of the Anti-Defamation League.

"A lot of the groups out there are trying to promote their racism, but want to do so without getting caught by law enforcement. So how do they disseminate these ideas with a limited risk of being exposed? One of the more effective ways is by doing these propaganda distributions," Magyarics said.

Katrinna Martin-Bordeaux, a spokesperson for the Buffalo Black Lives Matter movement, says there should be more indignation expressed every time racist literature is distributed.

“I think our weak spot is we are not talking about it. I think when there is leafleting it is an opportunity for the community and police to zero in on it,” Martin-Bordeaux said. “We’re increasing potential harm by not addressing.”

Rob Galbraith, a Buffalo resident who describes himself as "an anti-racist researcher" in his spare time, said profiles and friend lists on social media sites prove there are ties between the different members of white supremacy groups here and around the country.

"It's more than these folks just getting together and being racist. It is worth paying attention to this as a political agenda with policies," Galbraith said.