In the moments after a game at Pioneer High School more than four years ago, Dominick Welch walked out of the locker room and was swarmed by teenagers who wanted his autograph. Welch politely signed for everyone.

A year later, during the spring of Welch’s senior year at Cheektowaga Central, Welch sought others through basketball. Specifically, he showed up to practices of Cheektowaga’s Unified team.

Now a sophomore guard on the St. Bonaventure men’s basketball team, being involved in basketball came naturally to Welch. Academics, however, were another story. Growing up, he struggled to learn and to be a good student. When his teachers realized he could play college basketball, they came together to teach Welch how to study, what to study and what it would take to navigate college as a student.

As he prepared to leave Cheektowaga, Welch found a way to give back to the school and to share his love of the sport with his classmates.

“I learned there’s more to basketball than just playing,” said Welch, who was averaging 11.7 points, 6.5 rebounds and 1.9 assists entering a game Wednesday against George Washington. “It brought more joy to my life, knowing that I can really, one day, affect people. And knowing that something can be taken away from you, it makes you enjoy it that much more.”

'We're all in this world together'

At 6-foot-5, Welch was a quiet behemoth of sorts in the halls at Cheektowaga. On the court, he was a high school basketball colossus.

He became Western New York’s all-time leading scorer in boys basketball in February 2017, amassing 2,376 points in five varsity seasons. The 2017 Allen Wilson Buffalo News Player of the Year, Welch averaged 30.4 points, 12.2 rebounds, 3.4 assists and three blocks per game, and he was a finalist for the New York Mr. Basketball Award.

“He’s the most unselfish superstar, and he scored however many points he scored, but he could have easily had another 500-plus,” Cheektowaga basketball coach Patrick Cullinan said. “He had that many opportunities.

"When I saw him play for the first time in the seventh grade, I thought, this kid looks really comfortable on the court, the way he carried himself. Any time you put him on the court, it was home for him."

But Andrew Sedor, a coach and a special education teacher at Cheektowaga, saw how Welch struggled as a student.

Teachers and coaches, Sedor said, saw his athletic talent and fostered the tools he had to be successful academically. Sedor also saw how Welch motivated himself to become a better student. 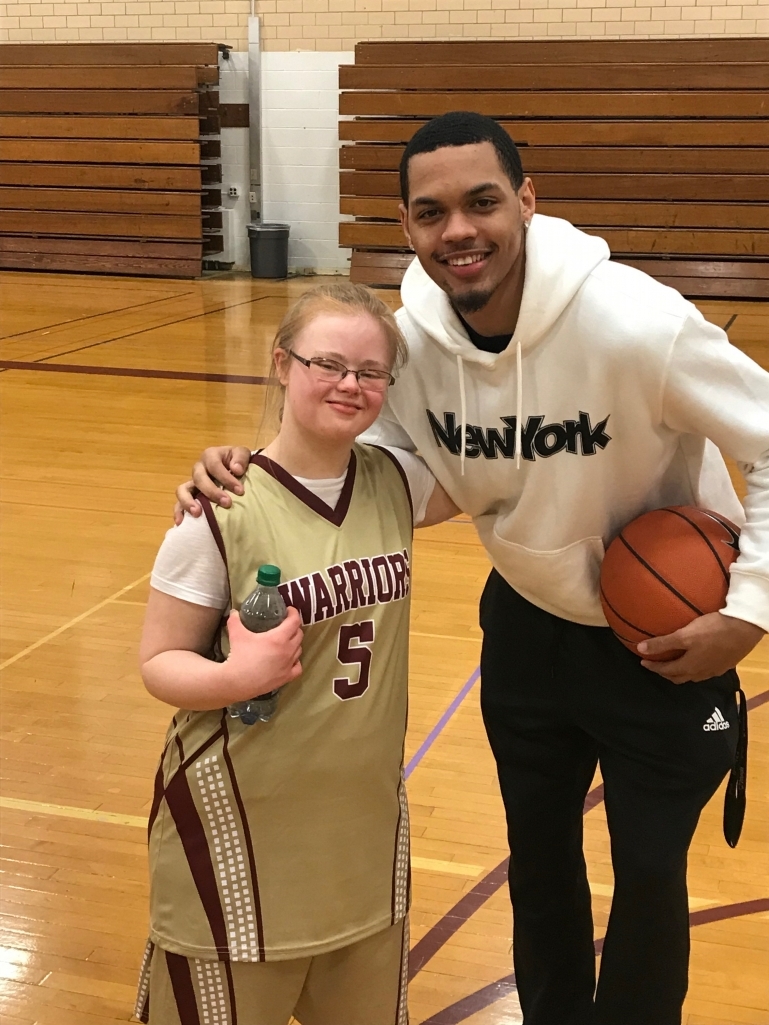 “He put the work in,” Sedor said. “It was teaching him how to study, what to study, how to write.

"We knew he had the skills on the court, but he had to prepare himself to be a student. He came into his junior year and he did a 360, and he put the work in. There wasn’t a teacher that wasn’t going to help him. There was a whole team here.”

When Cheektowaga established a Unified basketball team in the spring of 2017, Cullihan said, Welch was one of the first basketball players to get involved as a volunteer. He began by showing Unified players how to dribble, how to execute a bounce pass and then how to move in time with teammates on the court.

"He had a chance to give back and be a part of the community, and he understood that, hey, we're all in this world together," Sedor said. "He changed his schedule, and he found the time to do it."

It progressed to showing up to classrooms where students on the Unified team studied and eating lunch with them. Welch, Sedor said, gained an understanding of the power of forming relationships in his high school community.

“It’s sports where kids can have the same experiences as other high school kids,” Welch said. “It helps kids not feel left out. If we can play, you can play, too. The kids who play Unified sports, they can do anything that any other kid can do.”

In his postgraduate year at SPIRE Institute in Geneva, Ohio, in 2017-18, Welch completed requirements to become academically eligible to play college basketball. He averaged 18 points and 6.2 rebounds, and he shot more than 50 percent from the floor, including 38 percent from 3-point range.

As a freshman at Bona last year, Welch averaged 7.5 points per game and led the Bonnies with 45 3-pointers and 3-point shooting percentage (36.1), despite missing nine nonconference games because of a broken toe. He averaged 4.4 rebounds and 1.3 assists, and he scored in double figures 11 times in 25 games.

During the offseason, he committed himself to becoming a better all-around player and to becoming more self-assured and more comfortable on the court.

“When I got back from an injury last year, I had to adjust to defenses and learn all new plays,” Welch said. “Right now, I’ve felt the most comfortable I’ve been since I’ve been here. I just think my confidence level is at an all-time high, playing basketball and having an understanding of what (Bona coach Mark) Schmidt and what my team need of me.”

Welch had back-to-back double-doubles for the first time at Bona when he scored 22 points and had 14 rebounds – both season-highs – in a 62-55 overtime win Jan. 29 at Fordham, then scored 14 points and had 13 rebounds in a 74-65 win Saturday against George Mason.

He began the week ninth in rebounding average with 7.9 in the Atlantic 10 Conference, yet in the last few weeks, Schmidt has seen Welch take a more aggressive approach.

“Thirteen rebounds (against George Mason), early in the season, that probably would take him four games to get 13 rebounds," Schmidt said. "But he understands that’s an effective way to help his team win. When he’s doing that, he’s that much harder to guard.

"You don’t want to be just a one-dimensional player. You want to be a guy that, on the scouting report, it’s ‘Jam and make him put the ball down.’ Now, it’s ‘Make sure you block him out.’ He’s being much more aggressive, and that’s why he’s having the success that he has.”

In the grind of the season, Welch got a welcome surprise when Bona played Dec. 30 at the University at Buffalo. Welch had his own cheering section at Alumni Arena, filled with students, teachers and classmates from Cheektowaga.

Welch noticed one student, Amy Zelasko, who attended the game with her father, Nicholas. Cullinan, in fact, says Zelasko is Welch’s “No. 1 fan.”

Welch quickly excused himself from the line of players making layups, went over and gave Zelasko a hug and posed for a quick picture.

“That made me really happy,” Welch said. “I’d seen her before she even came up to me, and I had a chance to sit down with her during the shootaround.

"And working with the kids, it made me really happy, seeing them enjoy basketball, and seeing them grasp what I was able to teach them.”