Let’s hope the Niagara River Anglers date change doesn’t come back to haunt them after a decent Saturday last weekend. The date is now set for Feb. 22. Remember, the Southtowns Walleye Association’s Outfitters Fair is Saturday at the clubhouse located at 5895 Southwestern Blvd., Hamburg, from 10 a.m. to 3 p.m. Free admission and free parking.

The warm temperatures and snow melt have been good for fishing, according to Scott Feltrinelli with Ontario Fly Outfitters. Creeks levels have been pulsing and changing color, often bringing new fish to the tributaries. For the most part, we have had good water. “Some of the year’s best tributary fishing occurs in the winter months,” insists Feltrinelli. Big flies (streamers) are working well for these hungry winter fish. Steelhead seem to be paired up and spawning in many instances. Danny Jankowiak of Buffalo hit the streams on Tuesday and they were a bit high. Action should be good on the weekend if we don’t see too much rain on Thursday.

As the water continued to clear going into last weekend, the fishing improved throughout the river system. In the lower section, from Devil’s Hole to the Niagara Bar, it was a mixed bag throughout until the winds on Sunday hit. While the water was stained, consistent trout and walleye action was being reported by Tuesday. Scott Nobbe and Al Slocum of Cleveland had a banner day on the Niagara Bar and down river to take a mixed bag of brown trout and lakers over the weekend. They even caught a 20-pound king for a surprise February catch, all while fishing with Capt. John Oravec of Troutman. There was some good father-son action going on, too, as Nick Schmitt and his son Garrett of Eden tore it up on the lower river with Capt. Chris Cinelli of Grand Island. Pink egg sacs worked for steelhead, minnows for the walleye. Lisa Drabczyk with Creek Road Bait and Tackle in Lewiston reports that the shore guys in the gorge are doing well on trout using marabou jigs tipped with artificial minnows and fished under a float. No. 4 spinners also are working. In the upper river, some walleye and lake trout are being reeled in near the head of the river, north of the Peace Bridge. 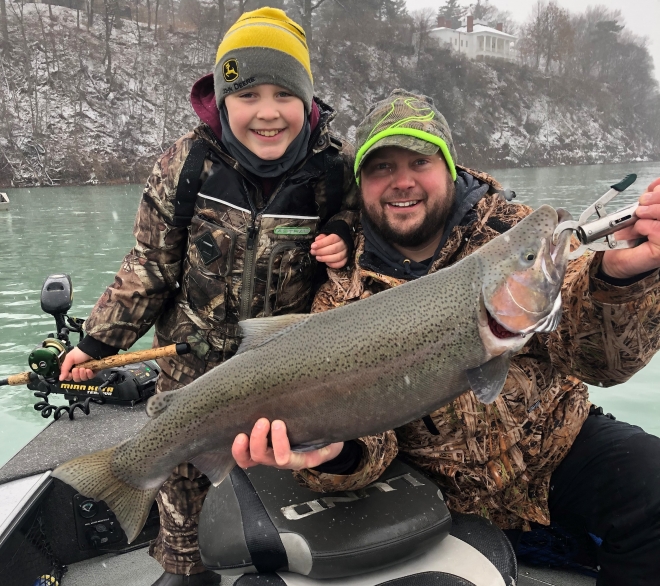 Some of the larger creeks are dropping and clearing, according to Scott Feltrinelli with Ontario Fly Outfitters. Trout are on all the creeks right now. The Oak is slightly high and stained, according to Ron Bierstine of Oak Orchard Tackle. Fish are available, but you have to work for them. If it rains Thursday, the water will remain high. At Sodus Bay, good ice fishing is being reported with up to 8 inches of ice in some places. Port Bay has 8-plus inches and Blind Sodus Bay has 8 inches, according to Chris Kenyon of Wolcott. Best spot for perch in Sodus was 20 to 25 feet of water. Use a small jig tipped with spikes. The Leroy Island area has been giving up some decent pike through the ice with tip-ups and pike minnows. Perch were hitting in the south end of Port Bay, in the narrows just before the bay widens.

Rich Davenport of Tonawanda reports Chautauqua opened for business last Thursday morning when the cold came through and locked up the shore. Clear ice from Bemus Point to at least Maple Springs is 4 to 5 inches. There is no snowpack, and it was very slick in spots, according to Davenport. Long Point is showing walleye on both sides of the point, and he had his best luck on the north side of the point in 31 to 33 feet of water.  His best lure was #5 jigging Rapala. On Friday, he caught more walleyes in the morning. He also fished off Maple Springs on Friday in 33 feet of water, out to 42 feet. Warner Bar was producing, as well as edges of Magnolia Bay. Everyone seems to be concentrated between Tom’s Point and North Bemus Bay to Warner Bar and Prendergast.

Things are finally firmed up nicely on Lake Simcoe, according to local expert Wil Wegman, Ontario’s most intensely fished inland lake. Simcoe sees more anglers fishing it through the ice during the winter than the three open water seasons combined. A major reason is outstanding yellow perch fishing opportunities bring in thousands of winter anglers. Yellow perch fishing this past week has slowed, especially for anglers not switching baits from what may have worked the week before. For Wegman, his go-to all season has been a gold-colored Slab grabber with a chartreuse bead, but last Sunday, big perch were turning their noses on this lure. Wegman is a strong advocate of carrying multiple HT ice rods rigged and ready to go, so after his Lowrance Elite Ice Machine showed him how perch were ignoring his bait, he downsized to an HT Alien Jig tipped with a micro sized plastic minnow and a few live maggots. From then on, it was “game on” and Wegman landed several beautiful jumbos in the 11- to 13-inch range. He noted that to sustain the true quality of Simcoe’s jumbo perch fishery, it's imperative anglers adhere to a self-imposed conservation ethic to voluntarily live release most of those big 13-inch females loaded with eggs. Wegman’s buddies have been chasing whitefish and lake trout and they have been doing well, with a remarkable amount of lake trout coming in at an identical 12-pound range, including three that were tagged by the Ministry of Natural Resources and Forestry staff this past fall as a part of a new research study. Whitefish have been hit or miss, but if you’re in an area where you’re marking lots, you are likely to catch your two-fish limit, especially if you fish during that real early morning bite not long after the sun comes up, Wegman said.