Ages ago (exactly two whole weeks to the day), I wrote about Buffalo having one chance to salvage an increasingly disappointing season by way of an advantageous upcoming schedule. The Sabres, never the opportunistic type, opted to drop a pair of winnable home games out of the break, outscored 8-3 by Ottawa and Montreal.

On Tuesday, Buffalo still has a glimmer of hope – something around 5%, if you are eyeballing the publicly available forecasting models. But put the playoff discussion aside for a moment and ask a different question: Is this a team that is even capable of going on a run with the way it is playing right now?

Buffalo has made the midseason collapse something of an art form at this point, but it was hard to watch this team in January. What Jason Botterill, Ralph Krueger and the rest of the front office wanted to see this season was progress. And although there have been intriguing individual contributions – Jack Eichel’s having a season for the ages, soon-to-be restricted free agent Sam Reinhart has taken another step this season, and Marco Scandella even enjoyed a brief renaissance before being traded to Montreal – the aggregate team performance has just been on a steady decline.

January was particularly gruesome. The team shooting nearly 11% across all situations helped gloss over the fact that this team played just about every game in incredible proximity of either Carter Hutton or Linus Ullmark. One skater (winger Jimmy Vesey) on the entire roster had an expected goal rate above break even. Not a single Sabres skater saw a positive shot differential while on the ice. And even with an incredibly high team shooting percentage, only four skaters saw a favorable goal differential. (This is what happens when you have 104 shot attempts in the red in 11 January games.)

If you look month by month at the three key performance measures, you can see that January – save incredible efforts from the aforementioned Eichel and Reinhart – was the worst stretch of hockey we have seen from this team, and that’s saying something: 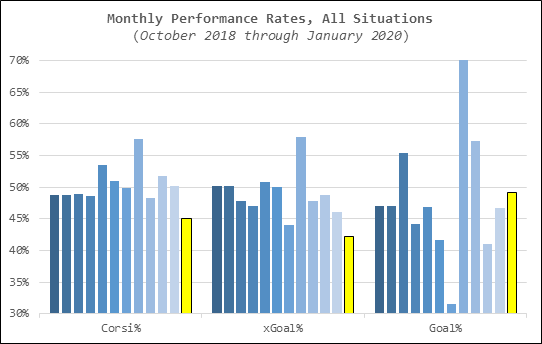 If you squint close enough, you can see the month where Buffalo carried the lowest shot rates and expected goal rates since the start of the 2018-19 season. And that was January 2020.

In a (very) limited defense of the Sabres players and coaching staff, it’s worth noting that Buffalo wasn’t exactly healthy. Jeff Skinner missed a few weeks with an upper body injury; Victor Olofsson, one of the season's surprise breakout players, was put on the sideline for six weeks with a lower body injury.

For a top-heavy team that has struggled for years to build out the rest of its roster, cluster injuries at a position can be particularly painful. Even with Skinner’s quieter production this season, those two injuries alone account for nearly 20% of Buffalo’s scoring. This is a team ill-equipped for that type of situation, scary as it is to say.

The last nail isn’t in the proverbial coffin yet, but right now you have to imagine that the front office is managing this team on two fronts. The first, a faint hope that the group can turn it around. The second, a full-blown analysis of what pieces are part of the future in Buffalo, and what players might be finding themselves on the trade block in the next few weeks. Keep in mind this is a Buffalo team with only five forwards signed next season, and one of those is Jean-Sebastian Dea (two games played). Expiring contracts are omnipresent with this year’s team, and that offers a variety of intriguing options for a team that’s likely entering seller mode in short order.

But, again: It’s Feb. 4, and we are reading the Sabres their last rites. Sobering times in the Queen City.