There are appreciable differences between soul and Caribbean cuisines, but not enough where they would seem out of place on the same menu. Both embrace strong flavor with an urge to stick to your bones and conjure fond memories of past family meals.

Romone Anderson and Dwight E. Land, owners of Brothers Takeout & Catering, 1281 Hertel Ave., have been close friends for years. Both received culinary degrees and worked together as part of the Cheesecake Factory chain for more than a decade, but they never had ventured beyond the big corporate sphere.

"We were sitting down and talking about how we've been working so hard for other companies that we'd want to do something for ourselves," Anderson said a few weeks after Brothers' Dec. 28 opening.

The end product is a takeout-only space in the former Wing Kings, next to corner bar Gabel's, for whom they handle the late-night bar menu. 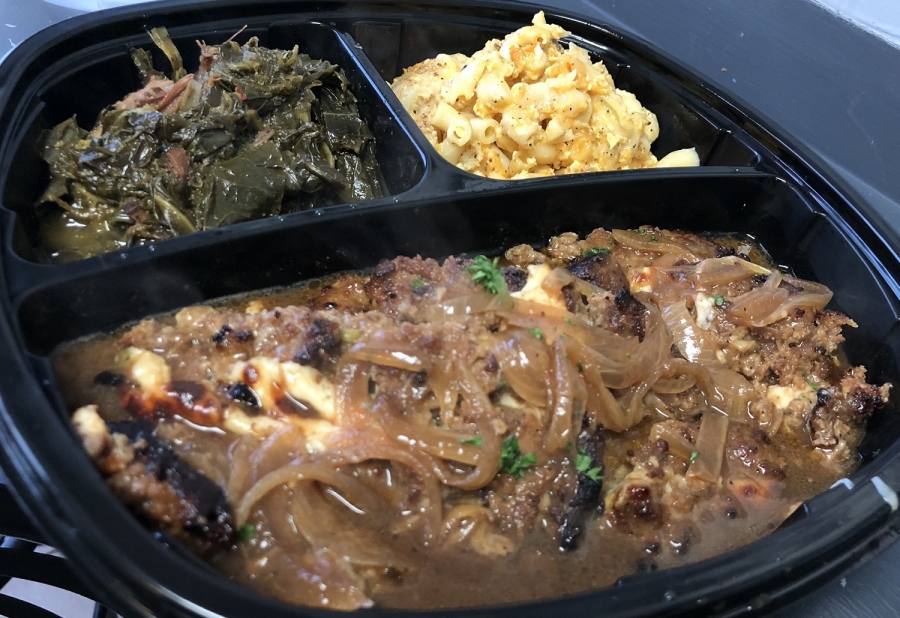 Brothers' stuffed meatloaf is a bestseller in the takeout joint's early going. It's pictured with sides of macaroni and cheese and collard greens with turkey. (Ben Tsujimoto/Buffalo News)

At Brothers, though, there are less than 10 stools for customers waiting to pick up their orders, a giant menu displayed on the wall, and a cooler with nonalcoholic drinks and desserts. It's the comfort food that's unique, Anderson repeats with emphasis, that will win over customers. 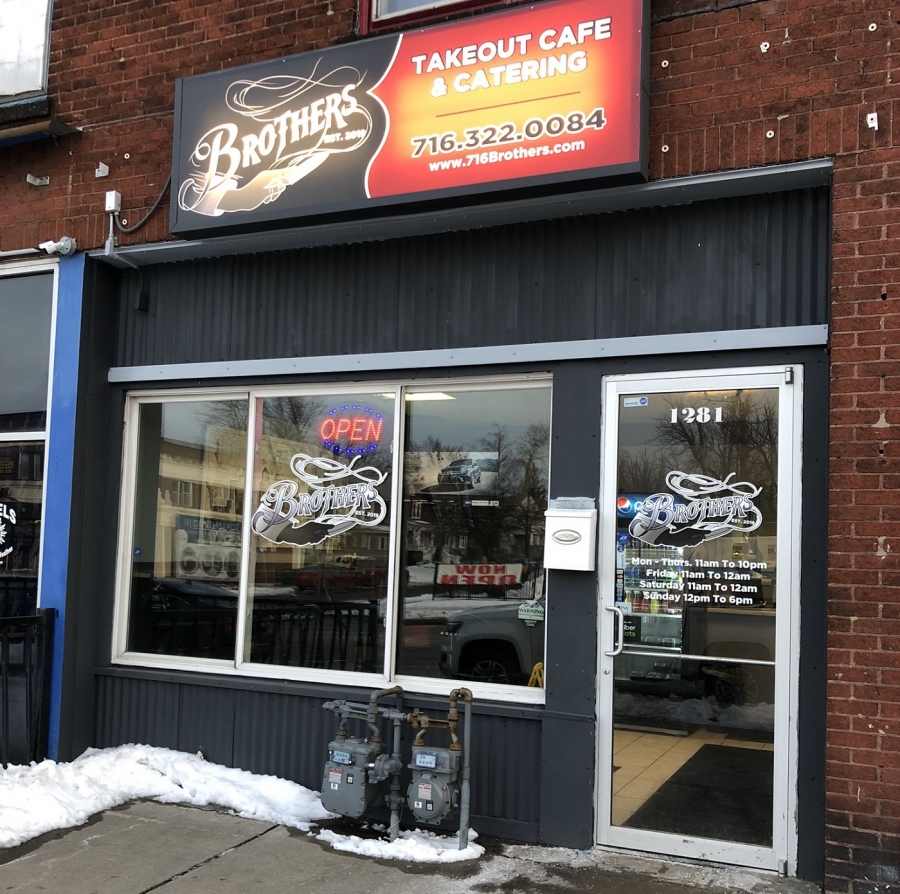 Confident in each other's cooking and approach, the pair – though not siblings – merged their backgrounds into one menu, with Anderson realizing his soul food roots and Land digging into Caribbean flavors. And, just because it's Buffalo, burgers, hot dogs and a Wednesday and Friday fish fry aren't left out.

Brothers' specialties are Caribbean-inspired oxtails ($16.95), which require four hours of cooking; meatloaf stuffed with mozzarella ($12.95), an Anderson twist; and fried lobster tail ($18.95), coated in a special batter and fried carefully to avoid chewiness.

Anderson, who moved back to Buffalo 18 months ago after a stint in Queens, has long grasped the magnetic appeal of soul food, but he couldn't respect those roots at a chain such as Cheesecake Factory.

"When you cook that kind of meal, family always comes," Anderson said, before praising his late grandmother's dressing that he "still can't get quite right." "Soul food takes a long time so a lot of people don't want to do it, so they can come here and say, 'I can have this in less than 15 minutes?' " 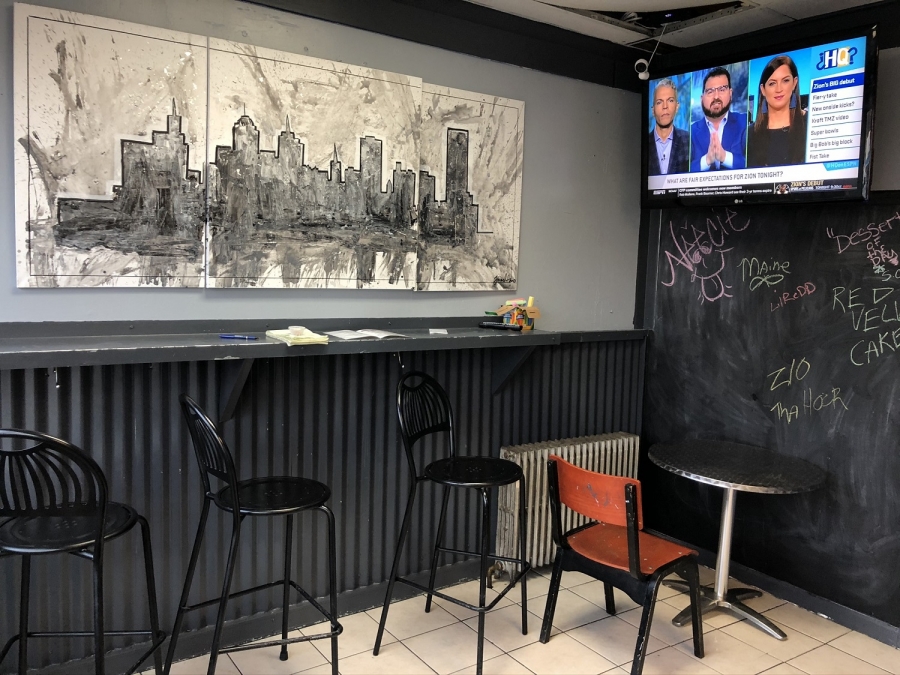 Part of the waiting area at Brothers Takeout and Catering. (Ben Tsujimoto/Buffalo News) 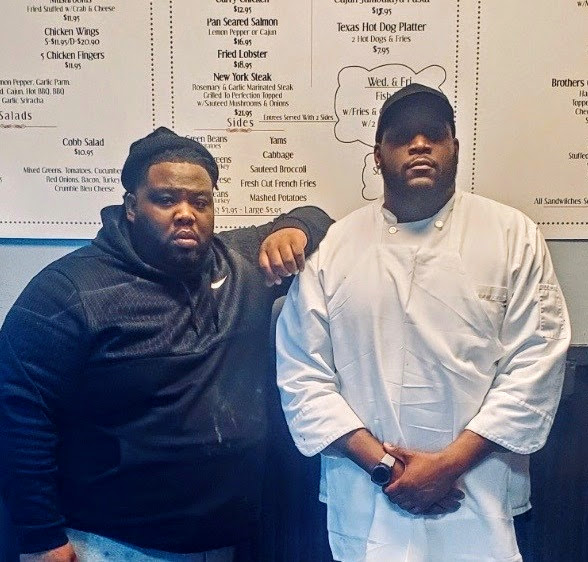 Anderson emulates the home-cooked Southern meal on Sundays, when Brothers offers a two for $25 special, featuring a choice of two entrees (fried chicken, baked chicken, curry chicken or Brothers' stuffed meatloaf), plus a choice of two sides per entree. The shrimp and grits is part of the deal, too, but it does not come with sides.

Land, the quieter of the two, didn't mince words when describing what Brothers was about.

The opening menu for Brothers Takeout and Catering, at 1281 Hertel Ave. Click to see a larger image. (Ben Tsujimoto/Buffalo News)