The federal government says Jeffrey Richards is a self-proclaimed white supremacist who makes bombs, sell drugs, owns a small arsenal of guns and holds membership in an outlaw biker gang.

In a photo posted on Facebook, Richards holds his right arm up in a Nazi-style salute between two friends, one wearing a T-shirt with a Confederate flag image and the other holding a Viking horn.

Yet, his defenders say the 29-year-old Niagara Falls man is mentally troubled, possesses a heart of gold and is willing to do anything to please others, even if it leads him into bad company.

“He is not a racist," Kathleen Kephart said of her son, "but I won’t say he’s not prejudiced.”

The year-old case against Richards in U.S. District Court in Buffalo comes at a time when hate group members and supporters are often linked to horrific crimes that have Americans concerned about their safety in public places.

Is Richards an agent of this hatred?

He has pleaded not guilty to federal charges that he possessed a homemade bomb, eight guns, cocaine, marijuana, more than 100 grams of a mixture of heroin and fentanyl, and drug paraphernalia to allegedly operate a "significant" drug trafficking business. The apartment he shared with his mother at a public housing project served as the depot for his operation, according to the government.

Richards was not charged with committing hate crimes, but prosecutors were concerned enough about the hate literature and symbols found in a raid at the apartment that they alerted the judge, who ordered him held without bail. 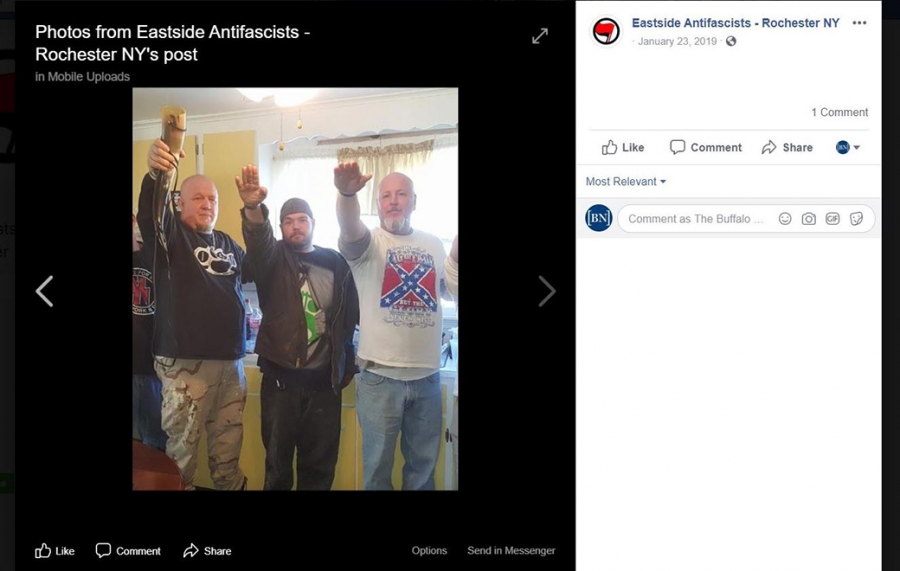 A photograph posted on the "Eastside Antifascists - Rochester NY" Facebook page shows Horace Scott Lacy, wearing a Confederate flag shirt, and Jeffrey Richards raising their arms in a salute. Todd Biro is pictured next to them raising his arm and holding a Viking horn.

“The government proffered that the defendant is a self-proclaimed white supremacist and white supremacist literature and Nazi regalia was found in his residence. Defendant is also a member of the Kingsmen Motorcycle Club, an organization the government proffered is involved in criminal activity, including drug dealing,” U.S. Magistrate Michael J. Roemer stated in his detention order.

Richards, who did not respond to The Buffalo News' request for an interview, has been held for one year behind bars at the Niagara County Jail while awaiting trial. He could spend the rest of his life in prison if he is convicted. 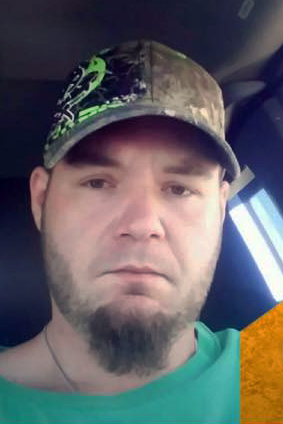 Jeffrey Richards in a photo provided to The Buffalo News by Richards and his attorney Michael J. Stachowski.

"This man is not the reckless bomber or white supremacist that the government is trying to paint a picture of,” said Michael J. Stachowski, Richards' court-appointed lawyer. “Everyone that I have interviewed has presented him as a good person.”

“He has black friends and they have come to the house,” his mother said.

Stachowski says the government is using stereotypes to build its case against Richards. But those who study the hate group movement say the government cannot ignore what was found in Richards’ residence because of the violence associated with white supremacists and Nazis.

In 2018, there were 7,120 hate crimes in the United States, the majority motivated by bias against race and ethnicity, according to the FBI's most recent statistics. A year earlier, the number of such crimes was slightly higher at 7,175.

“The circle of hatred just keeps growing and that kind of toxicity is really poisonous in somebody’s system,” said University at Buffalo American Studies Professor Kari J. Winter, whose research has extensively delved into race and interfaith relations. “If they allow themselves to hate and contemplate violence, that is a really difficult thing to contain.”

At least two confidential sources alerted the FBI that Richards was making bombs and distributing drugs, according to court documents.

An investigation by the FBI’s Joint Terrorism Task Force culminated in the Dec. 14, 2018, raid at the Packard Court apartment where Richards lived with his mother.

Richards, who was not home, was arrested during a traffic stop before the raid.

At another recent court proceeding, Assistant U.S. Attorney Brendan T. Cullinane said task force members had received information that Richards was driving around with a bomb, drugs and a gun. When he was stopped, only a stolen loaded handgun was found beneath the driver's seat, according to court documents.

When Weis questioned Richards, the agent stated Richards told him he “buys fireworks and other commercial explosive devices and subsequently improves the concussion and explosions of these devices,” according to the court papers.

Stachowski, Richards' defense attorney, would not use the words bomb or improvised explosive device to describe what was confiscated. The attorney, instead, said he planned to have an independent laboratory examine the “incendiary device” to determine “the nature of the material.”

Richards has lived most of his life at the Niagara Falls Housing Authority’s Packard Court apartments off Pine Avenue, where his toddler son would often stay, according to relatives.

His mother said his prejudice toward some African Americans can be traced to him being picked on while growing up. Kephart said a black teenager taunted him about being white. But Kephart said her son has friends of color and they sometimes visited their apartment.

“They would call me ‘ma.’ We’d play cards or they’d go up to Jeff’s room and drink beer,” said Kephart, who was evicted from the public housing apartment following the raid.

Kephart believes her son’s bipolar condition and anger issues are contributing factors to his troubles. His condition worsened as the years passed, Kephart said.

“He told me he would hear voices in his head. He said there was a clown’s voice and the Joker’s voice. He has a tattoo of the Joker on his arm.”

Richards is a BOCES graduate with a certificate in welding, his mother said. She said he has worked in construction and as a convenience store clerk.

Kephart said her son had only one previous arrest several years ago. A check with the Niagara Falls City Court supported her claim.

“He got into an argument with his brother. Jeff spent a weekend in jail,” Kephart said.

Todd Biro, a passenger in the SUV driven by Richards when he was arrested, says the government is wrong when it calls Richards a white supremacist.

“Jeff has no affiliation to any white supremacy group in the United States. He may have hung around with some who had ties to that,” said Biro, an outspoken member of White Lives Matter who calls himself a "white separatist" but bristles at labels such as "hater, bigot" or "Nazi." "Jeff is one of the nicest, kindest people you will ever meet and he is not getting a fair deal."

The Southern Poverty Law Center says White Lives Matter is a neo-Nazi group and a racist response to the Black Lives Matter movement.

A photograph posted on the "Eastside Antifascists - Rochester NY" Facebook page shows Horace Scott Lacy, wearing a Confederate flag shirt, and Richards raising their arms in a Nazi-style salute. Biro, who is next to them raising his arm and holding a Viking horn, said he does not know who took the photo or how it ended up on Facebook. But he insisted Richards is not a white supremacist. 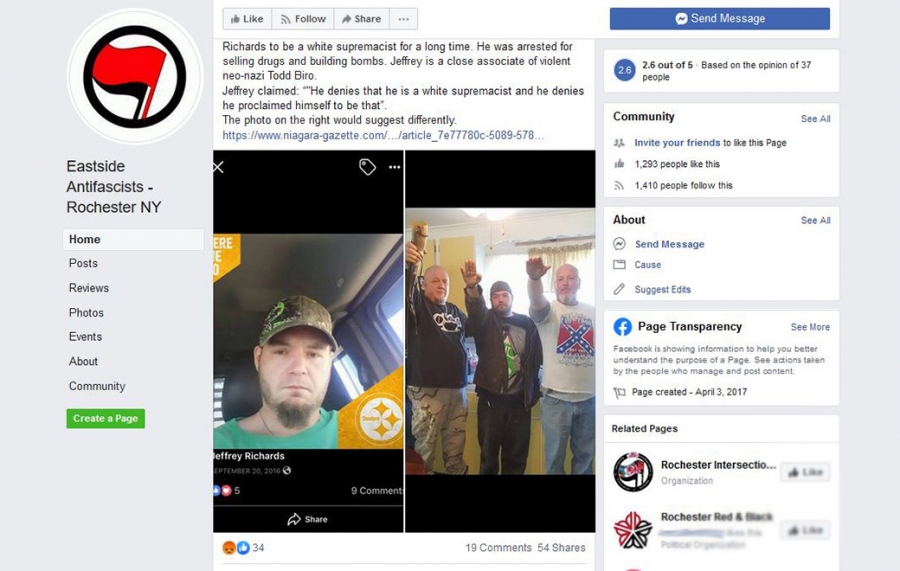 The Eastside Antifascists, which tracks members of hate groups, issued a statement about why its members thought it was important to post the photograph: "This is not a case of someone getting drunk and throwing up a sieg heil salute. This shows hardcore believers in neo-Nazi ideology."

Stachowski confirmed that Richards is one of the men in the photo.

He did say his client is not a white supremacist and any literature having to do with hate groups that was seized in the raid does not belong to Richards, but was given to his client by Biro.

Kephart claims the Nazi symbols found in her son's bedroom date back to his adolescent years and his keen interest in World War II.

“They were stickers that had Nazi signs on them,” she said in downplaying the significance of them.

A blanket with a Confederate flag design on it, Kephart added, was given to him as a “birthday or Christmas gift from a friend.”

Kephart said the guns, nails and other hardware cited by the government were actually items inherited by her son from his father, who died in 2017. Of the drugs, she said she did not know anything about them.

Biro, who described Richards as one of his best friends, says the government is exploiting the fireworks, “nuts and bolts” and the white supremacist literature to help further its own agenda in creating an atmosphere that makes white people ashamed of their race.

“The government is creating a narrative in the United States to make white people afraid to say they are white,” Biro, 53, said. “I’m very involved with White Lives Matter. I’ve been all over the country. But you will never ever find that I have called for an act of violence. I consider myself a very proud white man.”

Biro was investigated for his role in what was thought to be a possible hate crime at the former Rust Bar in Niagara Falls in 2018. The incident stemmed from an attack on a white Niagara University student who had gone to the bar with his African American girlfriend. Authorities eventually determined there was a lack of evidence and no hate-crime charges were issued.

In December, Biro was sentenced to three years of probation after pleading guilty to misdemeanor assault in the incident. He told The News there was no racial motivation. Biro has a long history of arrests. Years ago in Las Vegas, he was taken into custody along with his cousin John Wayne Bobbitt, who had gained international attention after his wife cut off his penis.

On the government's assertion that Richards is a member of the Kingsmen Motorcycle Club, Stachowski said his client is a member. However, the lawyer said Richards became a Kingsmen after the federal government had cleaned house by indicting Pirk and others connected to the killings of the two club members.

While Richards' relatives and attorney downplay the accusations against him, others who study the trajectory of hate group movements say the items taken from Richards' apartment and the company he keeps are reasons for concern.

Winter, the UB professor, said that while she cannot comment directly on Richards, the government’s revelations of what was confiscated “would be concerning at any time, but especially in our hyper stressed moment when there is such an uptick in hate crimes in the country.”

“If you look at any outbreak of violence, whether it is a pogrom or the Holocaust or the Salem witch trials, it becomes a social frenzy that brings out the worst in people,” she said.

The friendship between Biro and Richards is also concerning to Joanna Mendelson, a senior investigative researcher with the Anti-Defamation League’s Center on Extremism, which rejects the distinction between the terms "white supremacy" and "white separatism."

She also said that one of Richards’ Facebook friends was a known white supremacist and that the photograph of that individual displays a jacket emblem associated with Adolf Hitler and the white supremacy movement.

Kephart, the mother of Richards, offered another view.

She said that her son wants people to like him and is willing to go along with what they want.

Leafleting among uptick of white supremacy activities in Buffalo Niagara