On Sunday, there was new and growing agreement between global weather models that Western New York stood some chance of receiving moderate to heavy snow later this week. In the model blend was also some mixed precipitation, rain and some lake snow in the wake of a more potent storm system than we’ve seen in a while over this flimsy winter season.

Twenty-four hours later and the agreement on precipitation type and storm track between these three models still shows some disarray, even though we’re a day closer to the event. In any case, whatever comes out of these systems does not point to a lasting pattern change to more persistent cold. More on that later.

A wee bit of nuisance precipitation may arrive Tuesday, with some light, mixed showers falling in mild air. After a few light snow showers Tuesday night, it will begin to turn colder heading into Wednesday, with the midweek high struggling to reach 30.

It’s Thursday when the weather begins to turn. A slow-moving cold front will provide a pathway for several waves of low pressure, each with its own round of precipitation. It appears as though only marginally cold air will be here Thursday, so that the initial round may begin as snow and then evolve into a mixture, as depicted in this model: 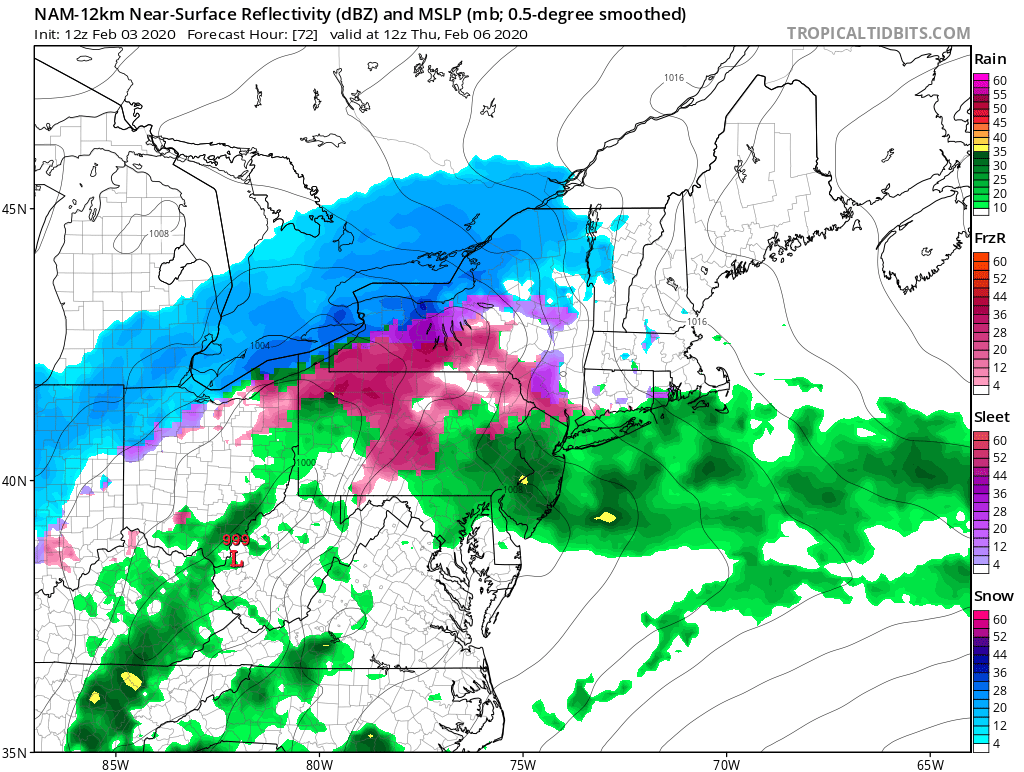 At this early juncture, it appears the best chance for moderate Thursday snow accumulations will be closer to Lake Ontario, as seen in the above model and also in the Sunday overnight European model. These models show more of a mix south of the Niagara Frontier.

Over the weekend, the Saturday night run of the ECMWF also took the low on a more westerly path. But the very next run on Sunday, it shunted to the low to our east, getting us into its colder circulation and more snow. Now, the next run has the low west again. I utter a meteorological "Oy." Who knows what the next run will bring?

A saving grace may be a hot-off-the-supercomputers run of the American GFS. The GFS is now in better agreement with the ECMWF. It, too, had the primary low moving east of us on Sunday, getting us more snow. This new run is now tracking the low just west of us, with the warmer part of the circulation.

The GFS then brings a deeper low well to our east, near the coast, far enough away to spare much of Western New York most of the deeper storm’s snow. There is, though, some heavier snow in the GFS for the southeast portion of our region, closer to the coastal storm. Bottom line from the GFS is just modest snow accumulations are in store for us between Thursday and Friday, with a possible exception of more snow in Allegany, Cattaraugus and nearby Pennsylvania counties.

In the wake of the passages of these two storm systems lies some potential for lake-effect snow in parts of Western New York on Friday and Saturday. The GFS doesn’t think much of that potential, with marginal moisture and temperatures. The ECMWF overnight run is more impressive with the lake-effect potential, as seen here.

This model has deep low pressure to our north, getting us into a period of gusty, cold, west-southwest winds, eventually veering more to west-northwest, which would send most of the lake snow down toward ski country by Friday night. Even with the ECMWF lake effect, which doesn’t show up much in the American GFS, when all is said and done by Saturday afternoon, there’s not that much to show for it in the ECMWF snowfall totals.

It’s early in the week and things will unfold and change as the week progresses. As of this writing, these systems do not appear to have “snow day” potential. On Sunday, the setup was starting to look more impressive for more snow. Even so, there is still the likelihood of a couple of periods of slick travel and reduced visibility. There is still a chance the storm track will shift back to a path more favorable for heavy snow. I will update this forecast in the comments section of the article as necessary.

As for wintry weather staying power, it’s still not there. The polar vortex will continue to be strong and located closer to the north pole much of the time the next couple of weeks, bottling up the true polar air farther north. As I’ve written, this kind of pattern does not preclude snow and occasional shots of wintry weather, as per later this week. In general, the extended-range ensemble means output from all three main models agree that by midweek next week, what colder air is in the lower 48 will gravitate toward the west, with milder air in the east.

For skiers, the timing may be good for some new natural snow at the end of this week to beef up the bases.

Sidebar: But what about those decimals?

When you see precise snow accumulation numbers with decimal points, such as these, you can round them off in your mind.

That’s what models driven by supercomputers do. They spit out precise numbers but — as you all know, I hope — nature seldom cooperates with such precision.

That's a major point of confusion I have with the European/ECMWF is its inconsistency. If you look at the legend on this model, you’ll see it's very aggressive, with mixed precipitation rather than snow on Thursday morning. In the lower left, you’ll see an area of low pressure on a path which would take the low well west of us, bringing us into the warmer part of the storm’s circulation.

So, I'm not sure where its moderate snow accumulations come from.