They had a “state champion target” on their backs all season, according to coach Rick Hopkins, but the Williamsville Fed hockey girls weren’t going to let anyone take what was theirs.

On Monday night in a packed Cornerstone Arena in Lockport, Williamsville won its second Section VI championship in as many years with a 3-2 overtime victory against Kenmore/Grand Island.

The Williamsville girls knew to expect a battle from a Kenmore/Grand Island team that upset its way to the finals, and that’s exactly what they got.

“We knew it was going to be a good game, and they definitely gave us a battle, going into overtime,” said Williamsville captain Emma Roland. “It was a lot of fun. We played our game, and it worked out.”

“We were definitely expected to win, but I was ready for anything,” said goaltender Mia Wendell. “I knew that was a good team over there, and we needed to be ready for the game.”

Roland’s performance included a hat trick that won the game for Williamsville. Wendell allowed two late goals in the first period, including Kaylynn Savoy’s go-ahead goal for Kenmore/GI with 13 seconds left in the period, but Wendell shut the door after that.

“First period was a little rough for me, I’m not going to lie,” Wendell said. “But my team picked me up and I knew that if they were there for me, I could be there for them in the second and third.” 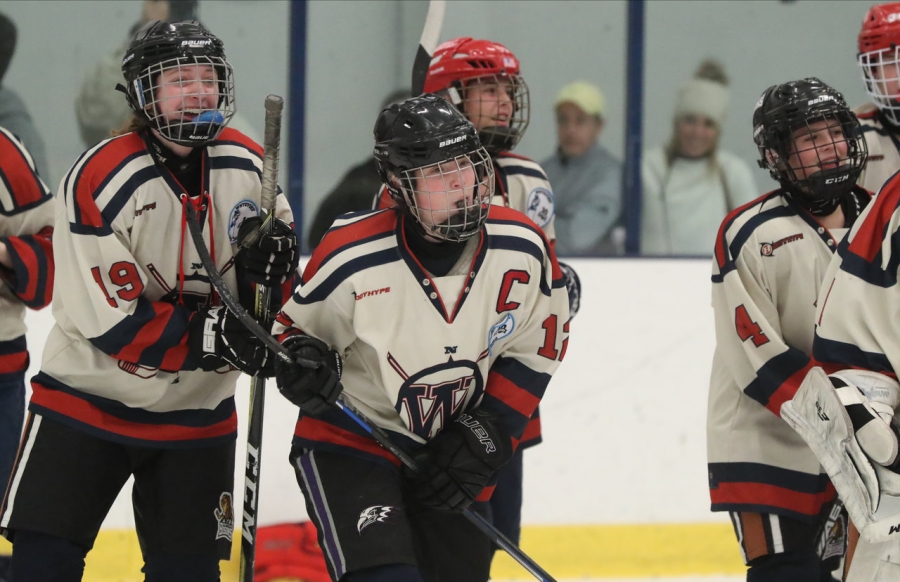 Roland’s first goal came just 4:30 into the opening period, and when Kenmore/GI tied it and took the lead, Roland scored with just 1:34 left in the second period to tie it, 2-2.

Both Wendell and Kenmore/GI freshman goalie Carolyn Bourgeault kept their opponents scoreless through the third to force overtime in an already thrilling game.

Roland needed less than a minute to win the game for Williamsville. Her third goal came just 28 seconds into the 7 1/2-minute overtime period, and equipment went flying as the Williamsville girls celebrated.

“My teammates put me in those positions, and I’m happy to be able to finish them,” Roland said. “It has to be the best feeling ever, especially in my senior year.”

Hopkins gave credit where it was due to Kenmore/GI, but he couldn’t say enough about his goalie’s late-game heroics and his Division I-bound captain.

“The girls played a great game,” Hopkins said. “Mia Wendell stood tall once they got that second goal. Emma Roland, I can’t say enough great things about her. The hat trick, including the game-winner in overtime. We were able to make the play at the right time to get the win.”

Hopkins and his team will enjoy this one for a while before they’re back to work to prepare for the state tournament this weekend in Lake Placid.

“Then we’ll focus on trying to bring another state banner back to Western New York.”