Philip R. Sims, a prominent area jazz musician who taught music in the Niagara Falls public schools in the 1990s and early 2000s, is the target of two lawsuits from former students who accuse him of sexually abusing them.

In 2004, Sims pleaded guilty to abusing one of the girls. He served six months in Niagara County Jail and 10 years' probation.

That victim's lawsuit, filed in August under New York's Child Victims Act, asserts that the abuse happened over a five-year period from 1998 to 2003, when she was a middle school and high school student.

In the second lawsuit, filed Friday, another woman alleges Sims abused her when she attended Gaskill Middle School from 1993 to 1996. No criminal charges were filed in her case.

The newer lawsuit, filed by attorney Paul K. Barr, alleges that Sims previously taught at another Niagara County school district, and that district allegedly fired Sims for improper relations with a student before he was hired by Niagara Falls in 1987.

"I'm not aware of anything like that," said Joseph J. Terranova, Sims' attorney.

The suit identifies a school district that fired Sims, but Barr said Monday that he may be mistaken about which one it was and may have to amend the lawsuit to change it.

Nevertheless, the suit contends that Sims' previous employer violated state mandatory reporting laws on sexual abuse, and if Niagara Falls had known, Sims never would have been able to abuse the plaintiff.

Both suits against Sims name the Niagara Falls City School District as a defendant.

James C. Roscetti, one of the school attorneys, said Monday that the district believes that if Sims abused anyone, it happened outside of school. The district has filed a cross-defense against Sims on that basis.

"Where the action took place, it wasn't on school property. It was off campus," said Superintendent Mark R. Laurrie, who was Niagara Falls High School principal at the time of Sims' arrest in 2004 and took part in an internal investigation that resulted in Sims' firing.

"Mr. Sims had a bed in his classroom for students to take naps on if they were tired," Barr said.

"I've never heard that. I have no idea if that's correct or not," Terranova said.

"One thing Mr. Sims was notorious at was developing long-standing relationships, romances, with these little girls," Barr said. "The scene of the crime, so to speak, would be in numerous places."

Barr said his client first encountered Sims when she was a fifth grader at Hyde Park Elementary School in 1992-93, and Sims was teaching music there. In September 1993, she moved up to Gaskill Middle School, and so did Sims, the suit said.

Sims served 10 years' probation, beginning with six months in Niagara County Jail, for his 2004 guilty plea to second-degree sodomy, which cost him his teaching license.

Sims, a 65-year-old Hamburg trombonist, continues to work as a musician. Sims' website lists several upcoming jazz performances in the region in which he will be involved. Sims' big band, Phil Sims and the Buffalo Brass, was long a popular Western New York jazz attraction.

The girl who sued him in August was 17 in 2004 and had a much different view of Sims then than she does now. The Buffalo News reported at the time that she "wept uncontrollably" when she learned that Sims was barred from contacting her for 10 years as a condition of his probation. She also wrote numerous letters to Sheldon asking for mercy for Sims, who could have been sent to state prison for as long as seven years.

"She had contact with him over an extended period. It was obvious she developed an emotional attachment to him," then-District Attorney Matthew J. Murphy III said at the time. "She was abused."

"She no longer has contact with Sims," said Michael J. Skoney, the attorney for the victim in the criminal case.

There were rumblings in 2004 that Sims might have had more victims. Sentencing was delayed for two weeks after Sheldon ordered Murphy to see if that was so, and the final sentencing was 90 minutes late because of one such accusation. Murphy said at the time that the allegation dated from the 1980s and had been deemed unfounded by the school district.

Another Niagara Falls City School District music teacher who worked with Sims was Patrick Kuciewski, who was accused of abusing a female student in another Child Victims Act lawsuit, filed in September. The abuse allegedly occurred from 1995 to 1999. 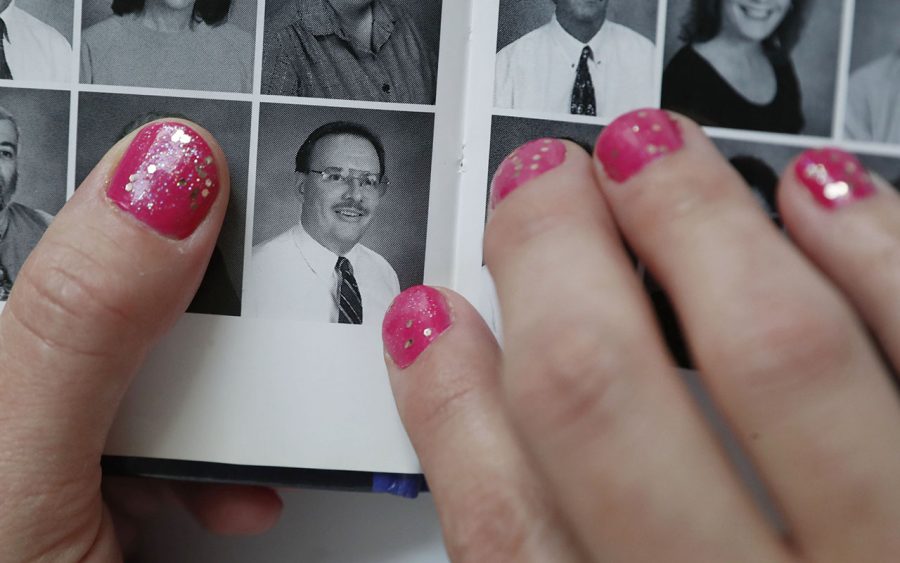 Laurrie said the district learned of allegations from a former student of Kuciewski in 2013, investigated them and fired Kuciewski.

"Not only were they both music teachers in the same department around the same time, but it's my understanding that both of them actually resided together in the same home," said Leah Costanzo, the attorney who filed suit against Kuciewski.