For most of Sunday’s Super Bowl, Fox analyst Troy Aikman was doing about as poorly as Patrick Mahomes, the Kansas City quarterback that he was criticizing.

Mahomes turned it around in the final nine minutes of the Chiefs’ 31-20 championship victory over the San Francisco 49ers and became the game's MVP.

He certainly had a much better performance overall than Aikman, the retired Hall of Fame quarterback.

In the first half and part of the second half, Aikman did more dancing than Shakira and Jennifer Lopez at halftime when it was time to give strong opinions on San Francisco coach Kyle Shanahan’s conservative decisions.

His refusal to take a stand was aggravating, especially when you know that Shanahan is going to face second-guessing on Monday.

In the fourth quarter, Aikman thankfully was more opinionated.

But it turned out to be opposite day for him. After many of the things that Aikman said, the opposite seemed to happen.

The way things were going, when Aikman accurately said Mahomes had not played well with the Chiefs trailing 20-10, you just knew that the quarterback was going to make the big play downfield to receiver Tyreek Hill to put his team back in the game.

A few plays later, Mahomes hit tight end Travis Kelce for the touchdown to cut the San Francisco lead to 20-17 and put the pressure back on the 49ers.

Earlier, as Aikman predicted Shanahan was going to run the ball down the Chiefs' throat with the lead, the coach called a pass play.

After the Chiefs took the lead, Aikman said it was a good idea for San Francisco to go for it on fourth down and 10 inside two minutes.

Sure enough, the fourth down that followed failed and the Chiefs almost immediately scored the clinching touchdown.

In other words, as an analyst, Aikman was no Tony Romo.

Some of the blame should go to play-by-play man Joe Buck, who should have asked Aikman more direct questions so he would give opinions before plays rather than after they occurred.

That might be too much to expect of Buck, who has a great voice but doesn’t come up with the questions needed and certainly didn't come up with any memorable lines after the Chiefs had won for beloved coach Andy Reid.

Not exactly “I can’t believe what I just saw,” the famous line from his late father Jack after a memorable Kirk Gibson home run in a World Series.

To Aikman’s credit, he is a pretty good referee.

He instantly saw an offensive pass interference call against the 49ers' George Kittle on a long completion that would have helped the 49ers get a lead at the end of the first half.

And he accurately predicted the winning touchdown by the Chiefs’ Damien Williams would stand before Fox’s officiating expert, Mike Pereira, agreed with him on both occasions.

If the touchdown call had been made against the Bills, three-quarters of Buffalo would have thought it was part of an NFL conspiracy. There was no clear-cut visual evidence that Williams didn’t score before he went out of bounds, but it sure looked extremely questionable.

Aikman also is good at describing replays and what quarterbacks and receivers see.

But I can’t remember one thing Aikman said that was as enlightening as anything Romo says routinely during games.

You might have thought he would have been harder on Shanahan when he kicked field goals a few times rather than go for it in short-yardage situations considering the strength of San Francisco’s running game. 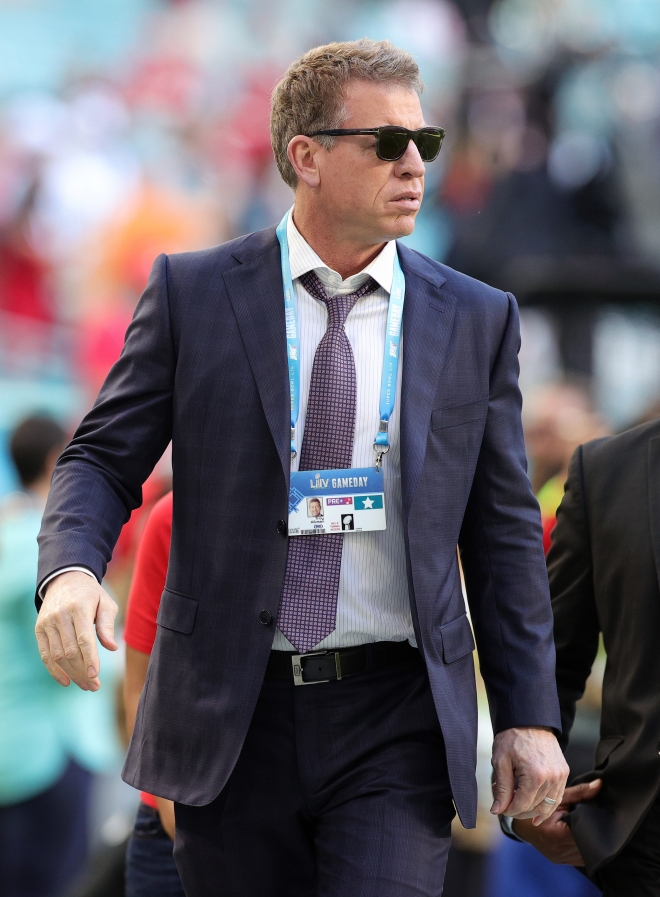 Aikman surprisingly didn’t weigh in on Reid’s decision to go for it on fourth down and one before Mahomes scored a touchdown to give the Chiefs a 7-3 lead.

After the touchdown, Aikman called it a “good decision.”

You only get points as an analyst if you make the call before the play.

He didn’t say anything when Shanahan decided to kick a field goal in the third quarter to take a 13-10 lead rather than go for it on a fourth and two at the Chiefs’ 25-yard line.

The calls by Reid and Shanahan on those two plays might have decided the game.

He also was silent when the 49ers declined a penalty that would have forced the Chiefs to have a second-and-seven rather than a third-and-two that they easily converted on one drive.

Best Graphic: The Fox decision to have a running line on the passing statistics of Mahomes and San Francisco quarterback Jimmy Garappolo was a smart move.

Best Sideline Nugget: Reporter Chris Myers said Reid decided to go for the touchdown on the fourth down because Mahomes’ toughness after taking a hard hit on the previous play “seemed to influence going for it on fourth down.”

Bring It to the House: The opening in which a young boy with the game ball raced through the streets as former NFL greats told him to “bring it to the house” was very cute.

Bringing Down the House: Gospel singer Yolanda Adams did a beautiful rendition of "America the Beautiful" and made it a tough act to follow for national anthem singer Demi Lovato. Lovato didn’t disappoint, either.

Time for a Poll: Or should I say pole? The halftime performance by Shakira and JLo were overwhelmingly praised by females on my Twitter timeline, but I know some females were appalled by the sexual nature of the performances because they felt it objectified and demeaned women.

Best Ads: I didn’t see many, but I loved the ad in which a crowd learned the winning field goal was revealed to have been kicked by a female after she took off her helmet. And at the risk of antagonizing Tom Brady haters, I also enjoyed his ad for Hulu.

Unnecessary Roughness: The pregame interview of President Trump by his Fox News friend Sean Hannity was worse than one can imagine. Hannity asked the president his opinion on prospective Democratic opponents so he could talk trash about them all without any pushback. The interview should have embarrassed all the real journalists who work at Fox News.

Creative Advertising: A supporter of Democratic presidential candidate Andrew Yang held a campaign sign behind Fox pregame host Curt Menefee for so long that Fox should have charged him for free advertising.

Best Pregame Interview: Fox play-by-play man Kevin Burkhardt had an interesting interview with his former analyst, 49ers General Manager John Lynch, about his decision to hire Shanahan and how he turned the franchise around.

Best Camera Shots: Lynch was caught on camera in his booth asking for a timeout with 90 seconds left in the first half that Shanahan curiously declined to call after getting the ball back. There also was a good shot of ex-Bills receiver Sammy Watkins – who had a good game – celebrating on the sideline after the Chiefs had the game won.

Gronk Scores: Former New England Patriot Rob Gronkowski, the Western New York native, was featured prominently in several comical pregame segments, but his best moment came when he turned serious and picked the Chiefs to win. He said the 49ers struggled against mobile quarterbacks like Mahomes and predicted a big game from Kelce. The only Fox studio analysts to pick Kansas City were former Chiefs tight end Tony Gonzalez and Jimmy Johnson.