He’ll have to wait even longer to actually play in one.

McCoy, who spent the previous four seasons with the Buffalo Bills, was a healthy inactive for the Kansas City Chiefs on Sunday in Super Bowl LIV. After watching Damien Williams tear through the San Francisco 49ers on the way to 104 yards on 17 carries, it’s easy to understand why.

Williams, 27, established himself as the Chiefs’ top option at running back as the season went on. He averaged 6.1 yards per carry and iced the championship, scoring a pair of touchdowns with less than 3 minutes remaining in a 31-20 victory.

The first of those came on a 5-yard pass from quarterback Patrick Mahomes with 2:44 to play. The capper was a 38-yard touchdown run with 1:12 left.

“Feed that man! Super Bowl champ Damien Williams. Enough said,” Chiefs tight end Travis Kelce said. “Two-six is one of the hardest-working guys in the business. He doesn’t complain about a thing. … At the end of the day, when we hand him the ball, we know he’s going north and getting in the end zone.”

Williams led a Kansas City rushing attack that finished with 129 yards on the ground – a total that was brought down by Mahomes kneeling three times at the end of the game for a loss of 15 yards. Without those plays, the Chiefs would have finished with more rushing yards than the 49ers. Few would have expected that, which Williams was plenty aware of. 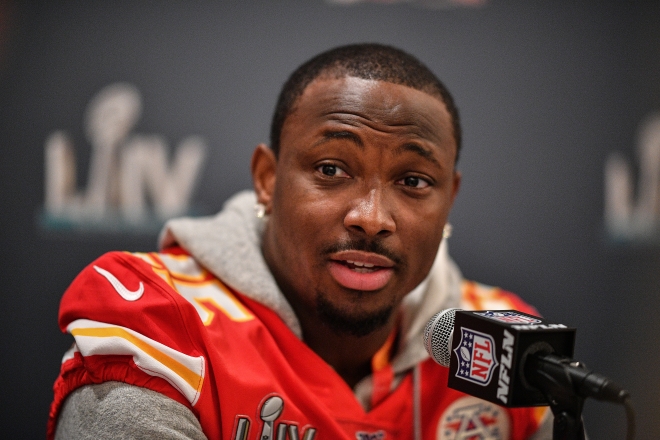 “You try not to pay attention to the media and everything, but you know, this is the only game on TV. We’ve got two weeks to prepare, it’s kind of hard to ignore what they’re talking about,” he said. “Just being able to hear them talk about the 49ers as an offense and their run game, I mean they’re a great team, I’m not taking anything from them or their run game, but to not hear your name or anything (about) how we do things on the ground – I pay attention.”

Williams spent the first four years of his career playing in Hard Rock Stadium as a member of the Dolphins.

“It’s crazy,” he said. “I built a lot of relationships here. … When you get into the league, you think about the Super Bowl, you think about what you would do in it, and for it to be here where I started my career at, undrafted, it means a lot.”

The Chiefs went with just two running backs against the 49ers, with rookie sixth-round draft pick Darwin Thompson joining Williams in the backfield. Thompson’s only carry went for no gain.

As for McCoy, his long-awaited Super Bowl ring comes after a quiet postseason. The writing was on the wall for him not playing against the 49ers given that he was inactive in the AFC Championship Game against the Tennessee Titans. He was active, but did not receive a carry in the divisional game against the Houston Texans.

McCoy talked about the possibility of sitting out the biggest game of his career during Super Bowl opening night last Monday.

“I mean, it's weird, but I will be happy,” McCoy said. “I feel like winning a Super Bowl is like, a lifetime thing, I mean, come on. I know so many great players who haven't even been here before ... so I'm excited. I can't be selfish. This is probably the first time I've ever been in a situation where it's like, it's bigger than Shady McCoy, you know what I'm saying?”

On Sunday night, Williams showed why.