It was always going to work better as symbolism than as music.

The pairing of international pop stars Shakira and Jennifer Lopez for the Super Bowl LIV halftime show at Hard Rock Stadium in Miami can be seen as a badly needed celebration of the diversity that is at the core of this country’s greatest collective accomplishments. The two Latina superstars – J-Lo grew up in the Bronx, Shakira was born in Colombia and made her mark in Spanish-speaking countries before breaking through to the English-speaking pop world with the crossover success of her fifth album – have made it clear they represent an often undervalued Latino community. They also saw their Super Bowl turn as an opportunity to represent female empowerment on one of the world’s biggest stages.

"Two Latinas doing this at this time in this country, it's just very empowering for us," Lopez said during a news conference announcing the gig.

"The Chiefs and the 49ers are run by women,” Lopez continued. “And then you got two women headlining the halftime show. ... When I think of my daughter, when I think of all the little girls in the world, to be able to have that, to see that ... "

For her part, Shakira insisted the Super Bowl is "as American as it gets," and that the pair’s performance was meant to celebrate the "heritage of this country, which is one of diversity."

Given the current state of the country, only the most hardened cynic could argue the symbolism of this pairing is anything but wholly positive.

But what about the music itself? Honestly, the Super Bowl halftime show has not really been about music, per se, in a long while. The J-Lo/Shakira throwdown carried that tradition forward, emphasizing spectacle, bombast and flash over music – in this case, an only mildly Latin-flavored pop-dance hybrid.

Admittedly, these halftime bacchanals in the current day have a lot to live up to. Over the past two decades, the shows have ranged from the absurd to the sublime. But those highest of high moments – Prince absolutely owning the show with poise, passion and professionalism; U2 offering a thematic set centered on healing in the days following 9/11; Paul McCartney being Paul McCartney; Bruce Springsteen and the E Street Band doing what only they can; even the Who tearing through a roughshod but powerful mini-concert – set the bar incredibly high.

The NFL and the halftime show’s producers seem to have opted to abandon the maintaining of that high standard, however. Last year’s mashup featuring Maroon 5, Big Boi and Travis Scott, was indicative of the halftime show’s dissolution, from a once thematically potent 12 minutes into a middle-of-the-road celebration of style over substance.

It should be noted it’s not common for female performers of a certain age – Lopez is 50, Shakira celebrated her 43rd birthday on this Super Bowl Sunday – to be given this type of spotlight. (Madonna is the rare exception to this rule.) Both performers proved themselves up to the task, arriving with abundant energy and maintaining that level of intensity for their full 12-minute allotment. 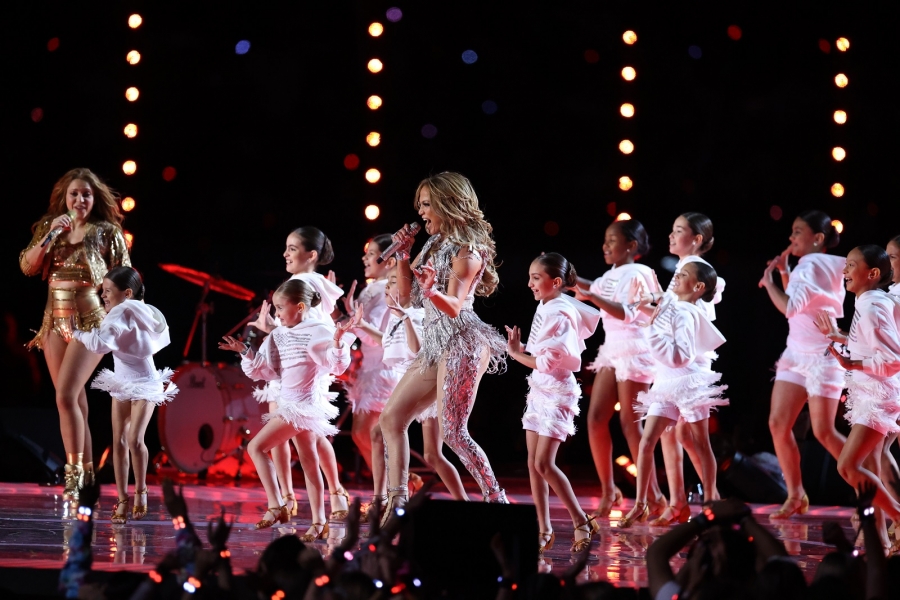 Shakira showed up first, dressed in red and flanked by a troop of dancers, before a string section arrived on stage for a brief balladic interlude that fell into a rather ridiculous and context-less reprise of Led Zeppelin’s “Kashmir” theme. She offered a medley of some of her best-loved tunes, including “She Wolf,” which segued into excerpts from “Empire,” “Whenever, Wherever” and “Hips Don’t Lie.” There were fireworks and choreographed dance moves, and vocals that sounded like they were likely prerecorded. A troop of male dancers took over for the ladies, and pretended to be playing horns, though again, the tracks sounded largely prerecorded, the appearance of several “live” musicians notwithstanding.

J-Lo arrived on an elevated platform with a pole atop it and dove straight into “Jenny from the Block.” She appeared to be truly singing live, a true feat considering she was dancing, swinging around the pole at center stage, and managing to tackle costume changes simultaneously. Her set continued with abbreviated takes on hits “Get Right,” “Waiting for Tonight" and “On the Floor.”

A choir of children showed up, and Shakira hopped onto a drum set, as J-Lo wrapped herself in a Puerto Rican flag. Then the two joined together at center stage for a clave-centered dance routine.

It was all high energy, flawlessly presented dance-pop with Latin overtones. Ultimately, however, it was more notable for the fast-paced brilliance of the dance routines, which were unfailingly dazzling.

No “equipment malfunctions,” a la Justin Timberlake and Janet Jackson, no overt politics or social statements, no overarching theme, and ultimately, no real surprises.