As it turns out, not everyone living in Buffalo public housing is poor.

Consider Joseph A. Mascia, the outspoken and sometimes controversial former Buffalo Municipal Housing Authority tenant commissioner, for example. He's been living at the housing authority's Marine Drive apartments with his wife on an annual income hovering around — and even surpassing — $100,000 in recent years.

The U.S. Department of Housing and Urban Development has permitted tenants to remain in public housing if their incomes increase, as long as they met income guidelines when they initially moved in.

But after years of debate, HUD is giving housing agencies the authority to evict the wealthiest of these over-income tenants.

The Buffalo housing authority, however, isn't going to evict anyone.

Instead, the authority is opting for an alternative HUD is offering: Agencies can raise rents on the highest-income tenants to the point at which the government is not subsidizing the housing at all.

A Buffalo News analysis of BMHA income data identified 173 households with incomes that exceed eligibility limits, including more than two dozen — the Mascias among them — that could potentially be affected by the proposed HUD regulations.

"I would encourage people to move on, but we would never evict people for being over-income," said BMHA Executive Director Gillian Brown. "I'm not going to punish people for bettering their circumstances."

"We'll charge whatever HUD allows us to charge them," he said.

BMHA is in the process of analyzing household income records to determine who might be affected and to calculate the financial impact of imposing rents to meet the proposed HUD rules.

The Buffalo housing agency hopes to have a new policy drafted by July, said Modesto Candelario, the BMHA's assistant executive director. The new rules would not take effect until 2022, he said.

"No one will be immediately impacted," he said.

The News analysis of BMHA records found five public housing families reporting incomes exceeding $100,000, including one at Jasper Parrish apartments reaching $124,500; one at Langfield Homes just shy of $120,000; one at Ferry-Grider apartments just over $112,000; and a LaSalle Courts household reporting $103,000. In addition, there was one Marine family — the Mascias — reporting a $113,000 income.

While these over-income families are located in a dozen different developments citywide, more than half — like the Mascias — live at Marine Drive, a complex on Buffalo's waterfront that has a unique history among Buffalo's public housing.

The Buffalo News obtained income data from the BMHA for 24 public housing developments, 23 of which are federal public housing, and one — Marine Drive — that is state public housing. All have current income limits set by HUD ranging from $43,050 annually for a family of one to $81,200 for a family of eight. The BMHA was unable to immediately provide data for two other developments, A.D. Price and Lakeview homes, which are owned by the BMHA but managed by outside firms.

The new HUD rules, however, would not affect all over-income tenants. They would affect only the wealthiest households with incomes that for two consecutive years are at least 20% higher than the median area income in Erie County. For 2019, that would range from a single-person household with an income exceeding $64,474 to an eight-person household with an income exceeding $131,920.

Of the 29 households The News identified as potentially affected by the proposed rules, 17 reside at Marine Drive. 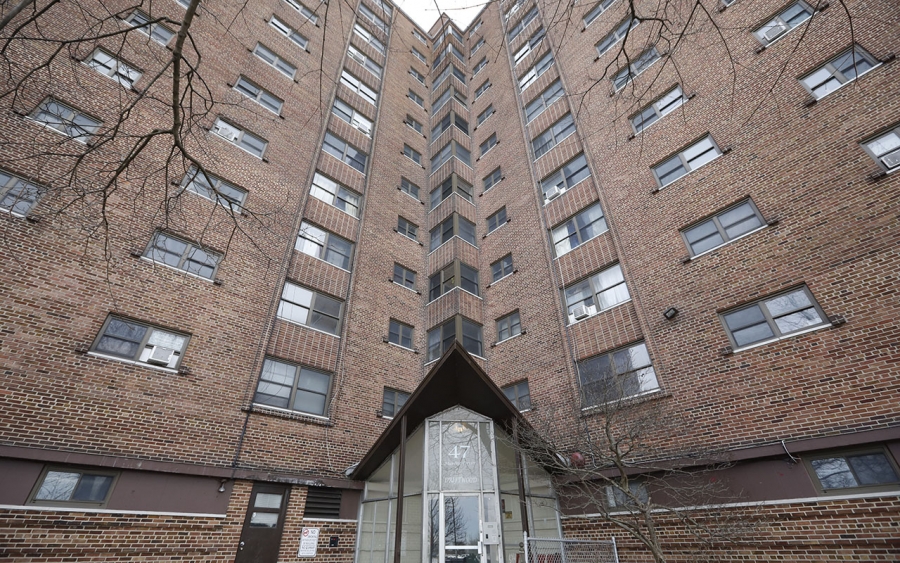 The disproportionate Marine Drive figures are partially because tenants enjoy subsidized living on the waterfront, but also reflect the complex's history, BMHA tenants and officials speculated. Marine was operated for 40 years by a tenant council that was accused of discriminating against minorities and giving preference to people with political connections. The tenant council did not always enforce income guidelines when renting apartments, a state inspection report concluded in 1995.

The Marine Drive tenant council was disbanded in 2004, but some remnants of the past practices remain, according to current BMHA tenants and officials.

"Marine Drive is a different kettle of fish," said Leonard Williams, a tenant-elected member of the BMHA board of commissioners. "That is why there are so many (over-income).

"It's changed. A whole lot of poor people have moved in. But initially, many people living there worked at City Hall or BMHA. It was political pull," he said.

Currently, housing authority tenants pay rent equal to one-third of their income, or a flat rate – more popular with higher-income families – based on HUD and state Housing and Community Renewal guidelines.

Mascia, and his wife, Lori, moved into Marine Drive in 1999, after Mascia's concrete company went out of business, just prior to his involvement in an automobile accident that left Mascia temporarily unable to work. "We had nothing," said Lori Mascia, who was supporting the family for a while on her account clerk salary.

Mascia returned to work that year, after landing a cement mason job with the Buffalo schools, he said.

The couple remained at Marine Drive even after their income increased.

"I love it here," Lori Mascia said of Marine Drive apartments. "Where else could we afford to live on the waterfront?  I don't want to ever move away from the water."

Today, at 75 years old, in addition to collecting Social Security and a small pension, Mascia occasionally does part-time maintenance and construction work. His wife does clerical work for the city Board of Education. Together, Mascia confirmed, their annual income was around $100,000 over the past four years, and recently went over $113,000. Records show the couple's income reached almost $130,000 – with overtime – in 2009, one of Mascia's final years working as a schools cement mason. The current income limit for a family of two living in public housing is $49,200.

Mascia said he and his wife pay $775 a month – including utilities – for their 736-square foot two-bedroom apartment. That's $545 in base rent plus a $230 surcharge for being over income. Fair market rent – which the BMHA could charge for the unit under the new rules – would be about $1,050, under current HUD guidelines.

Mascia said his household income will drop this year. He's cut back on his part-time work, and his wife will be retiring. If their income still exceeds the maximum, they'll pay the higher surcharge rather than leave, they said.

The Mascias said they complied with rental guidelines, and did not have any political connections, when they moved in to Marine Drive. 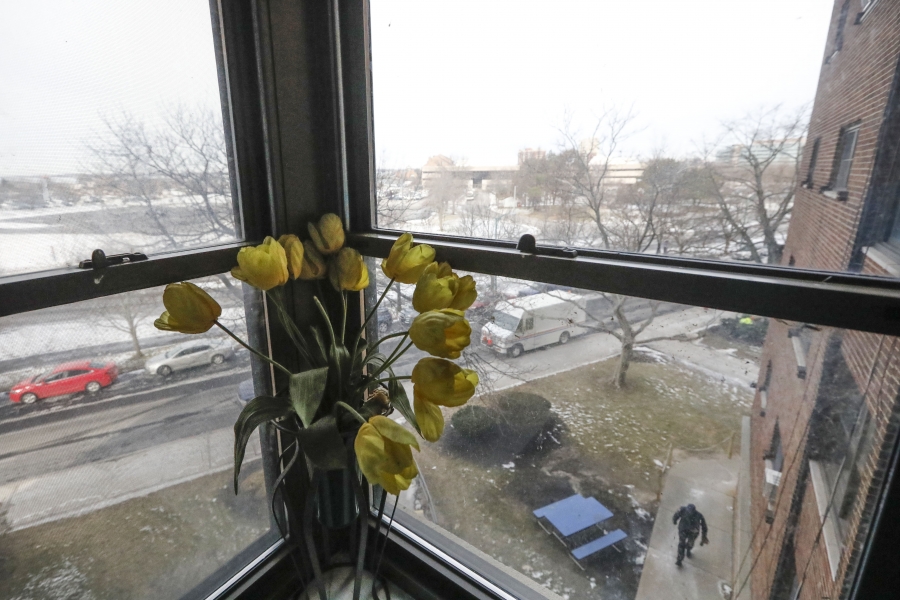 A view of Buffalo's harbor from a hallway window on the fourth floor in the BMHA's Marine Drive Apartments. (Derek Gee/Buffalo News)

The debate over above-income tenants living in public housing has been going on for years.

The inspector general argued HUD was spending some $100 million annually subsidizing over-income families at a time when other low-income families remain on waiting lists for public housing.

The Buffalo housing authority has 3,300 people on its waiting list for public housing, BMHA officials said.

"It's crazy," said David Hall, 39, who was recently visiting his nearly blind mother, a tenant at BMHA's Kenfield Homes. "You are messing things up for people who need an apartment."

"These residents are examples of success both of family and of public housing in encouraging self-sufficiency. They serve as community models and often as community leaders," was the position taken by the Public Housing Authorities Directors Association.

The Mascias agree, saying tenants like themselves provide stability and have a vested interest in maintaining an apartment complex.

Over the years, Joseph Mascia said, he's helped other tenants get construction jobs and has advocated for tenants even after he left the BMHA board of commissioners.

Mascia, who served as a tenant commissioner for 10 years, was forced off the board in 2016 after being secretly tape-recorded making racist comments for which he later apologized.

Mascia said individual tenants have specific circumstances affecting their finances. He and his wife, for example, were financially assisting their daughter and two grandchildren for a while. Mascia said he's also helped out other tenants over the years, buying space heaters when tenants with children temporarily lost heat, or paying a hotel bill when another tenant's apartment flooded. In addition, Mascia said, he paid legal bills fighting the housing authority's actions against him over the years.

Mascia also has bills left over from his failed cement business.

'What is the fair answer?'

Williams, the current tenant commissioner, said he understands both sides of the debate, partially because of his own experience.

"I've debated this in my head and with others for almost since I've come in public housing," Williams said. "What is the fair answer? I don't know. I know there are people in homeless shelters that would jump at an opportunity to move to public housing. I know I would not have liked for someone to knock on my door when I was working for the county and say, 'OK, you got lucky. Now you have to move out.' "

Williams was working as a taxi driver when, he recalled, he was offered a job in 2012 as constituent services aide to Erie County Executive Mark C. Poloncarz.

That job increased his earnings, he said, to about $60,000 annually, putting him above the public housing limit.

But knowing that his county job was a political appointment that he could lose at any time, Williams said, he decided to pay a higher rent to remain at Kenfield Homes rather than chance finding himself in financial trouble if he lost the job.

Williams lost the county job in 2016. "I was called in and told, 'We're going in a different direction,' " Williams recalled.

Williams — who was surprised to hear of BMHA tenants earning over $100,000 — said over-income tenants remain in public housing for many reasons.

Sometimes, he said, a family may be making additional money because an older child gets a job, perhaps an adult child who will soon be moving out. Other times, he said, one of the adults may have recently finished college and gotten a good-paying job. Perhaps, he said, they elected to remain in public housing to save money in hopes of eventually buying their own home.

Or, as in his case, a tenant may have obtained a temporary good-paying job.

"You just never know," Williams said. "As we talk, I can hear my mother's voice saying: 'Leonard, you have a good job now, but you don't know what is going to happen down the line.' "