You wouldn’t know that Lynda Marino has a serious heart condition, save for the scar that ends near the top of her breastbone.

Marino, 40, a busy mother of two young children, is tall, slender and outgoing – and fortunate to be alive.

She was diagnosed in her mid-20s with cardiomyopathy, nearly died from cardiac arrest four years ago and weathered open-heart surgery on New Year’s Eve at the Cleveland Clinic.

Her sister, 35-year-old Marianne Potratz, has the condition that thickens and endangers heart muscle, too.

The two sisters have become leading advocates for the Buffalo Niagara affiliate of the American Heart Association during the last few years, not so much because their condition is rare but because heart disease is so common.

They don’t want themselves – or you – to become another statistic for the No. 1 killer in the nation.

Cardiovascular disease can take a life suddenly or over time, at any age. Those stricken young often have a genetic predisposition like Marino, who lives in East Amherst, or Potratz, of Grand Island, but the Heart Association estimates that 80 % of cases can be prevented with healthy living and decision-making.

You need to eat right, exercise regularly and talk with your primary care provider about your family history of heart disease. Health care visits and screenings are important as often as your provider recommends, said Dr. Vijay Iyer, chief of cardiovascular medicine in the University at Buffalo Jacobs School of Medicine and Biomedical Sciences.

“Nobody should get to the age of 25 without knowing their blood pressure and their cholesterol numbers,” he said.

Action saves lives when it comes to heart disease

Ignorance is hardly bliss when it comes to heart disease, either.

“Most of the early symptoms can be very subtle or there may be no symptoms at all,” he said. “People could have had hypertension for a long time, and slowly built blockages in the arteries, and the first time they show up is in the hospital when they’ve had a heart attack or had a stroke – so not knowing about your physical condition, your medical history, can be quite deleterious. It can be potentially fatal.” 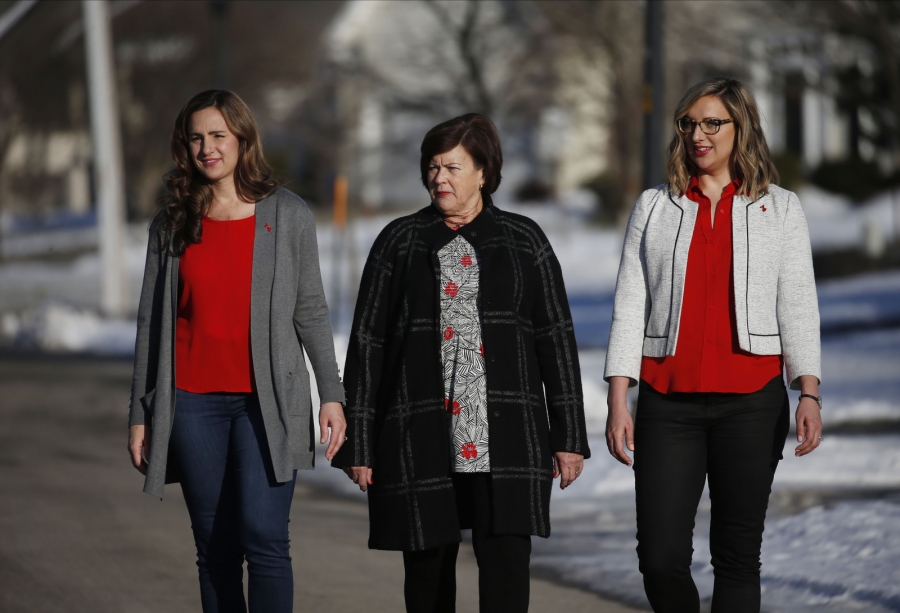 Lynda Marino, left, and her sister, Marianne Potratz, right, walk with their mother, Susan Minbiole, near the house where they grew up in East Amherst. Genetic testing after Marino suffered a cardiac arrest in 2015 showed that the sisters and their father, Barry Minbiole, have a genetic mutation that predisposes them to cardiomyopathy, a heart condition that must be closely monitored. (Robert Kirkham/Buffalo News)

It can be easy to take health for granted, particularly when you lead a busy life.

Marino knows. She learned she had cardiomyopathy in 2006, while in her mid-20s, when she was diagnosed with pneumonia. Her primary physician ordered a chest X-ray that showed signs of the condition, which thickens the heart walls, hampers blood flow and sometimes damages valves.

Marino was encouraged to see her doctor regularly, limit her exercise to moderate levels and eat right. She also was urged to be mindful of dizziness or extreme fatigue – two signs of disease progression.

In the years that followed, she felt fine. She and her husband, John, chief technical officer in the Cleveland Hill School District, started a family. She also landed a job as marketing director with Canterbury Woods retirement communities.

Things changed unexpectedly on Sept. 12, 2015, when Marino went into cardiac arrest while driving home from T.J. Maxx and Aldi in the Town of Lockport.

“I had a newborn son at home,” she said. “I had a 2-year-old daughter. I worked full time. Who knows what I was feeling, or just ignoring, beforehand because life was so insane.”

Her right foot slipped off the gas as she slumped past the steering wheel onto the console. The car crawled south on Transit Road at 5 mph, while her daughter, Claire, cried frantically in a car seat behind her.

“That’s when the miracles started happening,” she said, recounting what others since have told her.

Chris James, a fellow motorist, saw what was happening, stopped his car, ran to the side of Marino’s Forester SUV and was able to open the door because it didn’t have automatic locks. He directed the car to the side of the road, turned off the ignition and called 911.

Bill and Peggy Killewald watched the commotion across four lanes of traffic while Bill, a retired veterinarian, pumped gas at a NOCO station. The couple ran to Marino, whose electrical impulses to her heart had stopped.

“When Bill was doing CPR, he said I had no pulse,” she said. “My lips were blue and he, as a doctor, thought I was gone.”

A Niagara County sheriff’s deputy – armed with an automated external defibrillator – next joined the life-saving effort. At the time, the department was one of few in regional law enforcement that equipped its patrol cars with AEDs. Had she driven a few miles south into her home county, her odds of survival would have been worse.

Rescue workers rushed her first to Lockport Memorial Hospital, then Buffalo General, where she spent four days in an induced coma to help her recuperate.

In the coming weeks, both she, her sister and parents were tested for a gene mutation that predisposes people to cardiomyopathy.

Both sisters already knew they had the condition, confirmed through echocardiograms years earlier. They now learned they had the mutation, along with their father, Barry, 68, a retired Praxair engineer. 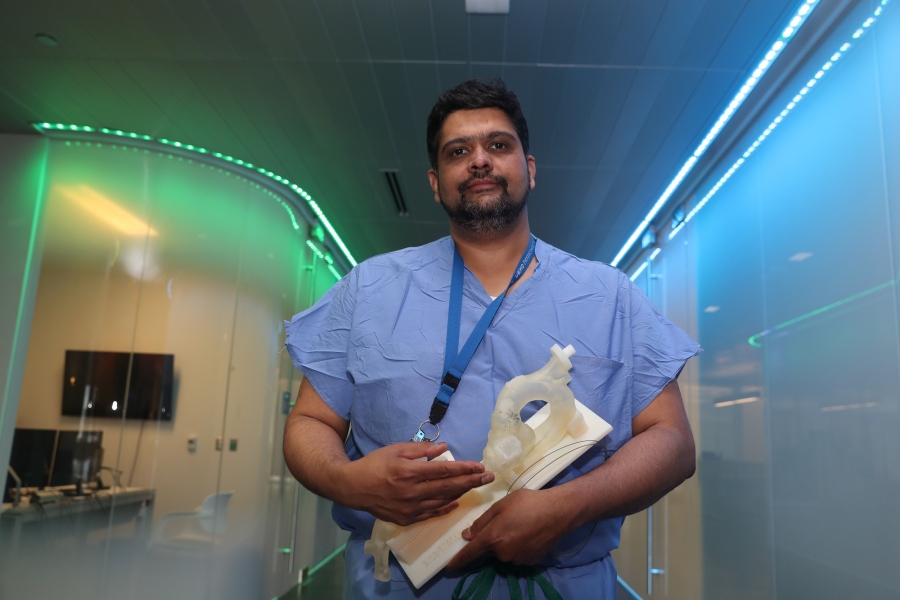 “Nobody should get to the age of 25 without knowing their blood pressure and their cholesterol numbers,” says said Dr. Vijay Iyer, a cardiologist at Gates Vascular Institute and Buffalo General Medical Center, as well as chief of cardiovascular medicine in the University at Buffalo Jacobs School of Medicine and Biomedical Sciences. (John Hickey/News file photo)

Several weeks later, surgeons at Buffalo General implanted defibrillators and pacemakers into Marino and Potratz, who have since called themselves the “Sling Sisters” because they needed to wear left arm supports for six weeks as they recovered.

The regional American Heart Association affiliate offered them support along the way, which is why they now share their stories as part of the Go Red for Women campaign, which encourages women to know their cardiovascular risks – and take action to reduce them.

They were discouraged from eating too much salt, fatty meat and processed foods, running marathons or lifting heavy weights. They were encouraged to walk for exercise, eat more fruits, vegetables and seafood, and drink plenty of water.

Both women also were put on beta blocker drugs to help regulate their heart rhythms.

“We live very normal lives,” Marino said, “or at least I did for a couple of years.”

She and her sister returned from a trip to Iceland and Paris in late 2018 and Marino began to experience more dizziness, shortness of breath and chest pressure when exerting herself. She led a nearly yearlong effort to find the best solution to removing substantial muscle scarring on her heart, and secure health insurance approval.

On New Year’s Eve, a cardiomyopathy team at the Cleveland Clinic performed an extensive myomectomy, slicing nearly a half ounce of damaged muscle from Marino’s heart – nearly twice as much as generally creates urgency for such open-heart surgery.

“Before this procedure was perfected, the only alternative was a heart transplant,” said the sisters' mother, Susan Minbiole. 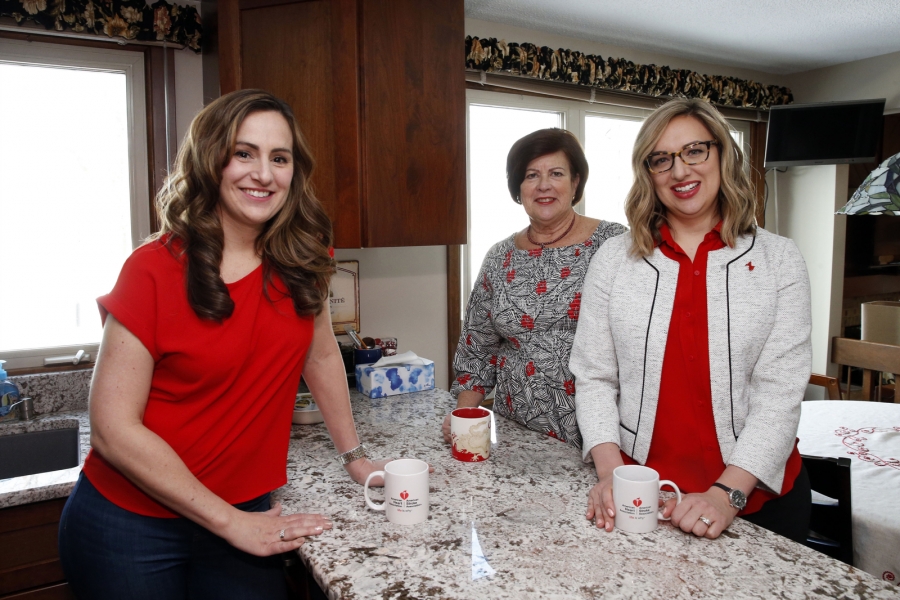 From left, Lynda Marino, Susan Minbiole and Marianne Potratz have become key supporters of the Go Red for Women campaign, which encourages women to know their cardiovascular risks – and take action to reduce them. (Robert Kirkham/Buffalo News)

Marino hasn’t been able to drive or lift anything heavier than a milk carton since her surgery. She has returned to the Cleveland Clinic twice since surgery and will do so less often going forward. She also continues to work with cardiologists and electrophysiologists in Buffalo.

The Minbiole family always has been tight. Marino lives just a few blocks from her parents, while Potratz and her husband, Seth, also are regulars at family gatherings that have taken on greater meaning in recent years. Family members vacation together more regularly, and their gratitude – and giving – has taken on greater proportions.

Friends and family members became part of the Sling Sisters team that has become a force in regional Heart Association fundraisers.

The experience also helped underline the importance of family, community and preparedness when it comes to good health.

“We really promote hands-only CPR because my life was saved in part by bystanders, complete strangers, that jumped in to help me,” Marino said. “You could be someone else's hero by learning CPR or suggesting your friend go see the doctor because you're hearing her complain about an ache in her arm or other symptoms of heart disease.”

The sisters are CPR-trained and, because there is little research on cardiomyopathy, Marino has enrolled in a Yale University study on exercise for those with the condition.

Meanwhile, they and their families marvel at medical advances that help Marino and Potratz stay on top of their challenges.

Marino has a device similar to an Apple Watch that can take an EKG, and both sisters have another device, half the size of a toaster, that takes heart readings from their pacemakers and defibrillators and transmit them by cell signal to health specialists in the event of an unusual reading.

“The pacemaker and defibrillator will always be there to protect against any future cardiac arrest,” Marino said. “It doesn't stop it from happening, but it would stop it from killing me.”

They hope more advances will come in the future – and work toward that end in part because Marino’s now 6-year-old daughter and 4-year-old son, Logan, also have the MYBPC3 gene mutation that predisposes them to the same condition.

As is the case for everyone, the sisters said, it’s better to know something like that than not.

“Some say ignorance is bliss,” Potratz said, “but in my case, knowing that I'm protected is far more valuable than not having the information at all.”