FRANKLINVILLE – The Western New York girls basketball career points list is filled with members of the Haskell family tree, and so too was the brightly-lit gym at Franklinville High School on Friday night as they were all on hand to see if one of their own could do something historic.

Haskell needed 37 to topple the former Randolph star’s total of 2,947. She netted 38, with her final three points all coming on free throws, as Franklinville defeated the Cardinals of Randolph, 75-66, in CCAA East I girls basketball.

Haskell set the Western New York record by swishing the first of two free throws with 1 minute, 30 seconds left. Officials halted the game for a second time in roughly a minute to honor the reigning Sister Maria Pares Buffalo News Player of the Year for the feat. She received congratulations from her teammates and a commemorative basketball marking the occasion, as Maycock applauded from the stands. A minute earlier, Haskell tied Maycock’s total on a traditional 3-point play.

“It’s an incredible goal to pass — Mckenna was a great player and had a lot of points,” Haskell said. “It’s a really cool accomplishment.”

Haskell, who is in her sixth varsity season, posed for photos with her teammates, Maycock and family members – including Samantha Kopp and Laura Hughes — following the game.

Haskell is now the fourth member of her family to hold the No. 1 spot on the all-time scoring list. Cousin Samantha Kopp (Franklinville) now stands fourth with 2,420 points but held No. 1 at the time of her graduation in 2009. Aunt Laura Hughes (Franklinville) held No. 1 from 1983-2001 with 2,196. Cousin Joelle Connelly held the mark with 2,300 when she graduated from Pioneer in 2008.

“It’s so cool that my family has had a lot of players (No. 1) and now I’m able to be one of them,” said Haskell, who achieved the feat with her father and Panthers assistant Jeff on the bench. 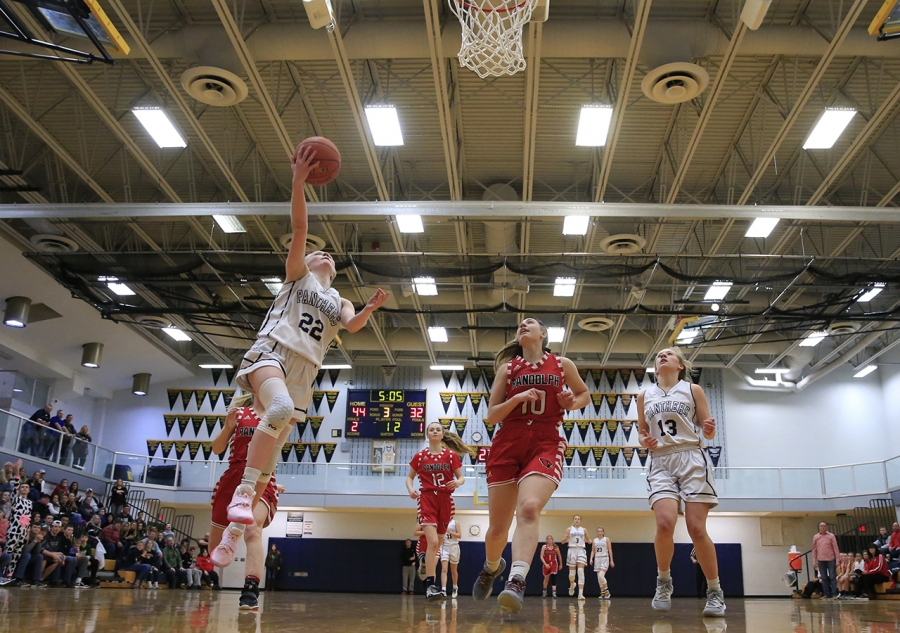 It’s a milestone that did not look like a sure thing on this night. Haskell had several shots that looked good rim out and also missed six free throws – including three straight during her first attempt at matching the record, which is un-Haskell like considering she came in shooting nearly 95 percent from the foul line.

Still, she played her usual game of setting up teammates for open shots as the Panthers at one point pushed their lead to 25 points. Abby McCoy drained five three-pointers during a 19-point performance, while Abby Burrell added 14.

“If I didn’t break it tonight it wouldn’t have mattered. It’s all about my team and everyone scoring too and just winning games. It’s not all about the points. … It’s kind of a relief but also I was happy too because of how cool the accomplishment was.”

Haskell scored eight of her team’s first 12 points but stayed on eight for the rest of the first quarter. She had 17 points at halftime as Franklinville led 36-26 at the break.

Like most great scorers, Haskell piles up points in bunches. She had a hot streak during the final 4:57 of the third quarter pouring in 14 to bring her career total to 2,942 heading into the fourth quarter.

Those last points didn’t come easy during the final 8 minutes as Randolph did their best not to give her time or space. But as Haskell has done throughout her career, she found a way to put the ball in the hole.

Needing three points to tie, she got fouled making a layup with 2:37 left. She made the free throw to tie Maycock, leading to the first stoppage to honor Haskell.

The even bigger celebration followed roughly a minute later and then after the final horn.

“(The fourth quarter) was indicative of her whole career,” Panthers coach Allan Dunlop said. “She’s had to earn everything she’s gotten and she deserves everything she gets because she works extremely hard.

“She’s got nerves of steel and she’s one tough kid, that’s for sure.”

And now the countdown to 3,000 career points begins.

“It’s amazing to see how far she’s come," said Maycock, who used to work on her shooting with the Haskells. "She’s an amazing player. … I’m so happy for her. I hope she just soaks it all in. I’m just really excited for her.”