The owner of an Attica restaurant acclaimed for its menu blending Polish and Italian specialties – and its unusual decorating motif – is moving 23 miles west to Clarence.

Morluski's is set to open in early summer in the former Clarence Church of Christ building at 10678 Main St., at Sawmill Road.

And, yes, owner Jeannine Morlacci confirmed it is bringing more than just its food and its reputation to the new location.

"The flamingos are coming," she said with a laugh about the decorations that adorn the restaurant and its menu.

It's the latest promising revival of a structure in Clarence Hollow by the DeRose family – David; his wife, Kathy; and their son, David Jr. Their previous and ongoing projects on this historic stretch of Main Street include the former First Presbyterian Church and the Humbert House.

"It was another opportunity," David DeRose said. "It was a beautiful old building and it's going to look gorgeous when it's restored."

The Romanesque Revival red-brick church building was constructed in 1876 and dedicated in 1877. It was home to the Clarence Church of Christ for about a century before the congregation moved and sold the building.

It later housed the Clarence Sewing Center and then the Henry and Henry home decor shop but it's been vacant for many years, said Douglas Larkin, president of the Clarence Historical Society.

David DeRose said he and his family initially had hoped to bring a brewery into 10678 Main but that project fell through. He then started talking to Morlacci, who he knows because his family's Utley Acres farm provides grass-fed beef to her restaurant.

Morlacci opened Morluski's at 121 Prospect St. in Attica in February 2018. The restaurant is known for using locally sourced ingredients to produce homestyle dishes ranging from scallops on white bean ragu to dill pickle soup and gnocchi to pierogi – all reflecting her husband's Italian heritage or her own Polish background.

"Everything is fresh," Morlacci said, including the pierogi and pasta made from scratch.

Polish-Italian cuisine is the draw at Morluski's in Attica

Morlacci said the restaurant is a destination drawing patrons from Rochester, Letchworth, this area and even Canada but people have pestered her to move closer to Buffalo and she believes the shift to Clarence will give her a larger local customer base.

Morlacci lives in Akron so she'll have a shorter commute to the restaurant but she said all of her employees plan to stay with her at the new site.

"We're sad that we're moving from Attica, because we've had some great regulars. But they said they'll follow us," Morlacci said. 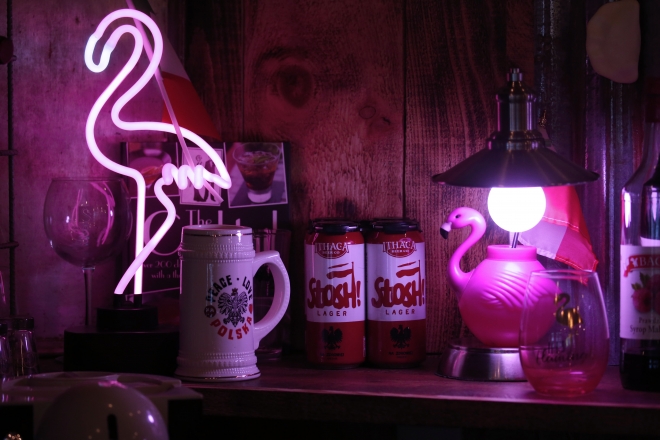 Some of the pink flamingos collected by Morluski's. (Robert Kirkham/News file photo)

She said she'll have room for more tables and a full bar – they offer local beers, wine and hard cider now – in the Clarence location. They're planning to stay open through the spring in Attica and close for a week or two before reopening at the new site in June.

David DeRose revealed Morluski's would be the tenant at 10678 Main during Clarence Supervisor Patrick Casilio's State of the Town address last week, after Casilio pointed out DeRose and asked if he had any news to share.

"They kill it in Attica and we think it’s going to be really successful here in Clarence," DeRose told the audience.

The DeRose family has rehabilitated historic buildings in the Clarence Hollow for several years now and believes Morluski's is another good tenant for the district.

"The more reason people have to be in the Hollow, the better the Hollow's going to do," David DeRose said.

Their first project was the former First Presbyterian Church, at 10750 Main St., which they turned into a venue for weddings and other events called the Brickhall at the Hollow.

The DeRoses also bought the neighboring Magoffin House, at 10748 Main, an Italianate-style home that dates back to 1865 and takes its name from the former town supervisor who once lived there. They converted that structure to apartments.

And the DeRoses are partnering on the restoration of the Humbert House, 10622 Main St. at Ransom Road, a local historic landmark and former pharmacy named after a prominent town family.

Salvatore's Hospitality's bar and tapas-style café is expected to open around April at the site, with the DeRoses leaving the barn as a carriage house-style residence.

"The guy's a one-man revitalization out here in the Hollow," said Larkin, the Historical Society president.