Donna Stepien and Ignacio “Nacho” Villa’s previous home was a 200-square-foot “tiny house” on wheels in rural Vermont. Now living in Buffalo – Stepien’s hometown – the couple has upsized to a 462-square-foot “little house,” made largely from repurposed shipping containers.

In keeping with their belief that one does not need much space or many belongings to live “effectively and comfortably,” the couple has no dishwasher, disposal, air conditioner, television or home internet, relying instead on their phones’ unlimited data plan. They each have a laptop and connect to the internet by using their phones as a hotspot.

They have a compact front-load clothes washer but no dryer, opting instead to air-dry clothes.

They store perishables in a 4-cubic-foot refrigerator and dry goods, bought in bulk, in large clear jars.

They step into a 3½-by-5-foot “wet bath,” outfitted with an open shower, wall-mount toilet, sink and grab bar that doubles as a towel rack.

They keep their small inventory of pots, pans, utensils and dinnerware within reach on open shelves in the kitchen and their homegrown vegetables in a small freezer in the laundry/office area.

“We ate our last bag of green beans last week,” said Villa, who works at and co-owns Farmer Pirates Compost LLC on the East Side, which produces compost for gardeners, urban farmers and landscapers.

The couple, both previously married, met online seven years ago and moved to Buffalo in January 2016 to be closer to children and grandchildren living in Western New York, Pittsburgh and Cleveland. They married in September 2016.

After buying a double vacant lot in Black Rock, where Stepien’s family has roots, they began building their new home. 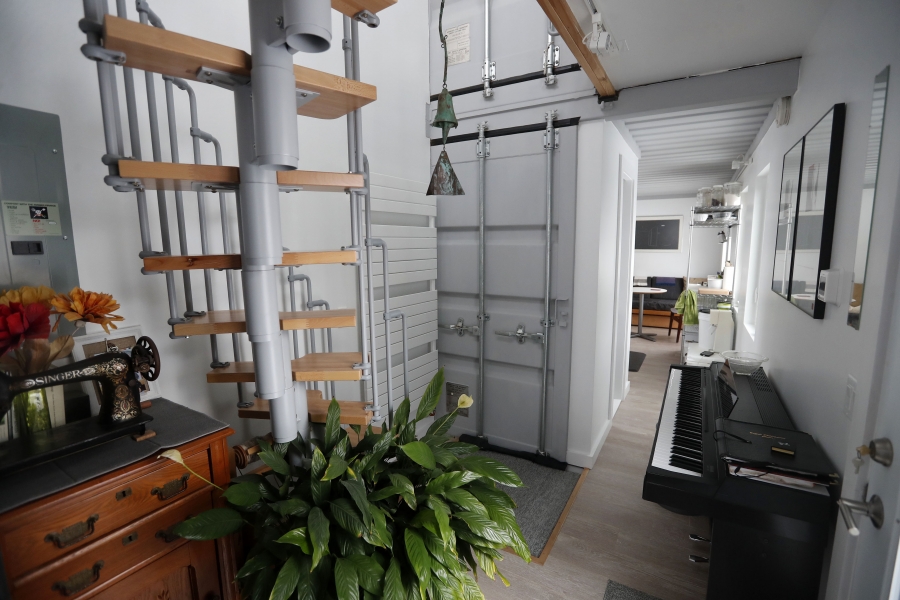 A view of the first floor. The couple left exposed parts of containers indoors, such as this section near the staircase. (Mark Mulville/Buffalo News)

In recent years, small houses have been big news, with HGTV airing shows such as “Tiny House Hunters” and Pinterest, design websites and books devoted to the subject – including those focusing on shipping container homes, which are constructed from containers that are no longer in use.

The couple purchased three “one-trip” containers – meaning the containers were used just one time in transit – for $2,700 each, including delivery, from a company in New York’s Hudson Valley. They worked with a local team that included an architect, welder, builder, plumber, electrician and others.

The home’s design features two 8-by-20-by-8.6-foot containers stacked lengthwise, a single container of the same size and a conventional “stick built” portion that connects the stacked containers and the single container. The two-story connector contains the stairway leading to the upper container, which is now the bedroom.

The single container is positioned at a right angle to the connector to form an L-shape, which creates a private deck and courtyard in the back.

The house itself is set further back on the property to make room for a large front vegetable garden – which allows them to meet and mingle with neighbors.

Architect Brad Wales agreed with the couple’s commitment to incorporate the containers’ original shape into the design, rather than, say, just pushing two together and cutting a big hole in the middle to create a wider space.

“It was very true to the nature of the container which, I think in terms of any kind of design, is the goal – to have integrity in the use of the material. They were using them in an honest way,” said Wales, a University at Buffalo architecture professor. He noted that Stepien was very much involved in the design.

Stepien and Villa wrote a detailed article posted on the Partnership for the Public Good website that covers the entire process of building their home – including permitting issues, design choices, building costs, setbacks, concerns about contamination, even meeting with neighbors to present their plan. 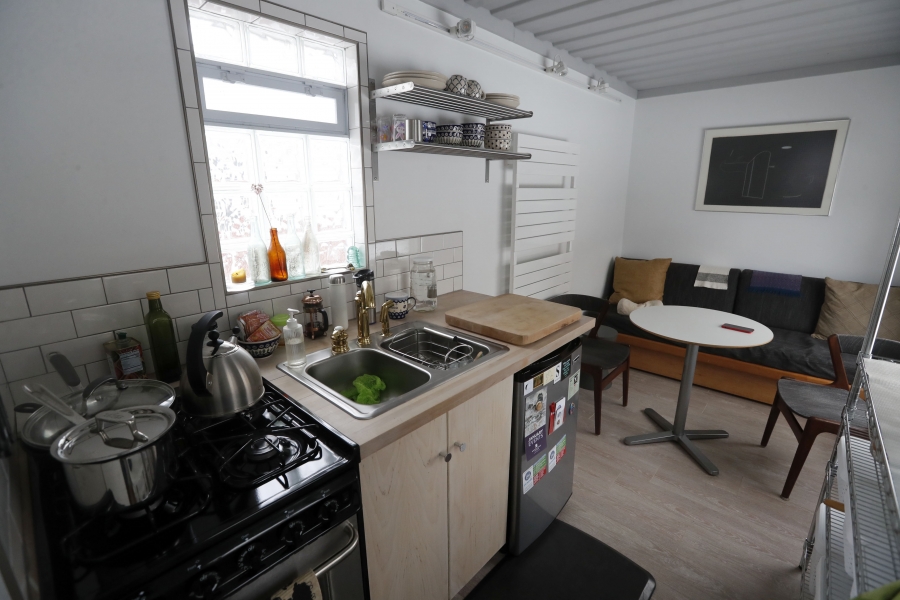 Living small has its benefits, say Stepien and Villa. A greener lifestyle. Long-term low utility and maintenance costs. Having more time for family and personal interests.

“It’s reducing our footprint,” said Villa, who was born in Colombia, graduated from the University of Guelph in Canada and Michigan State University and has a background in farming and agriculture.

Stepien said she has long believed in the concept of smaller living, even as a kid wondering why people needed both a living room and a family room.

“I’ve always felt this way. I always wanted small and minimal,” said Stepien, an artist and educator who teaches online courses through Vermont State Colleges and works at an after-school program at a local school.

“In my adult life, as the years went on, I became more used to living smaller and smaller and smaller. When I moved to Cambridge, Mass., to teach, it really became not only a desire but a necessity because of the high cost of rental and purchased property – and the fact that people lived very, very small and very economically,” said Stepien, who graduated from Nardin Academy and the former Rosary Hill College, now Daemen College, where she studied psychology and fine arts. She earned master’s degrees from Canisius College and University at Buffalo.

The couple had hoped to build their new home for about $60,000 but ran into some higher-than-expected and unanticipated expenses so paid nearly double that.

Building on a vacant urban lot meant they needed to hook up water and sewer lines and then repair the damage to the street and public sidewalk portions that had needed to be excavated, for example. They also decided to add a partial foundation, which cost about $7,000.

Yet the couple found many ways to cut costs:

• When it came to insulating their home, the couple chose to insulate inside rather than outside, which is less costly. Wales, the architect, explained that doing so makes an already narrow space even narrower by about a foot. You lose space.

“If you put the insulation on the outside, you’re now having an interior that’s the container. I kind of prefer that as a strategy, but it’s probably more expensive. So Donna and Nacho were interested in using containers as inexpensively as possible,” he said.

“But because of their personality types – they are very energetic but also very laid back – they were able to accept the narrower living space,” he said.

The couple designed around the increased narrowness and also created an outdoor courtyard space. (They said they save large gatherings for summertime entertaining.)

• The couple believes strongly in reusing and repurposing materials. Villa used broken pieces of concrete from the driveway apron and sidewalk that had been torn up during site preparation to create a new walkway and driveway, set into crusher stone.

• The white subway tile in the kitchen was left over from a bathroom remodel at Stepien’s daughter’s home. The couple also devoted three Saturdays looking for gray and white tiles for the bath at four recycled-materials stores.

• They purchased used slabs of maple butcher block and solid cherry for countertops. They found an enameled cast iron sink and other materials at Habitat for Humanity ReStore.

• Furnishings are few and include some family pieces, including the chest of drawers in the laundry/office area. Another heirloom, the cedar hope chest in the bedroom, belonged to Stepien’s grandmother.

“It was the first piece of furniture she got when she emigrated to this country from Poland, as the story goes,” said Stepien, adding they still have the key to the chest.

Finally, their lifestyle choices go beyond their home, they say.

They share one car – a Subaru Impreza – and travel by bicycle or on foot in good weather. 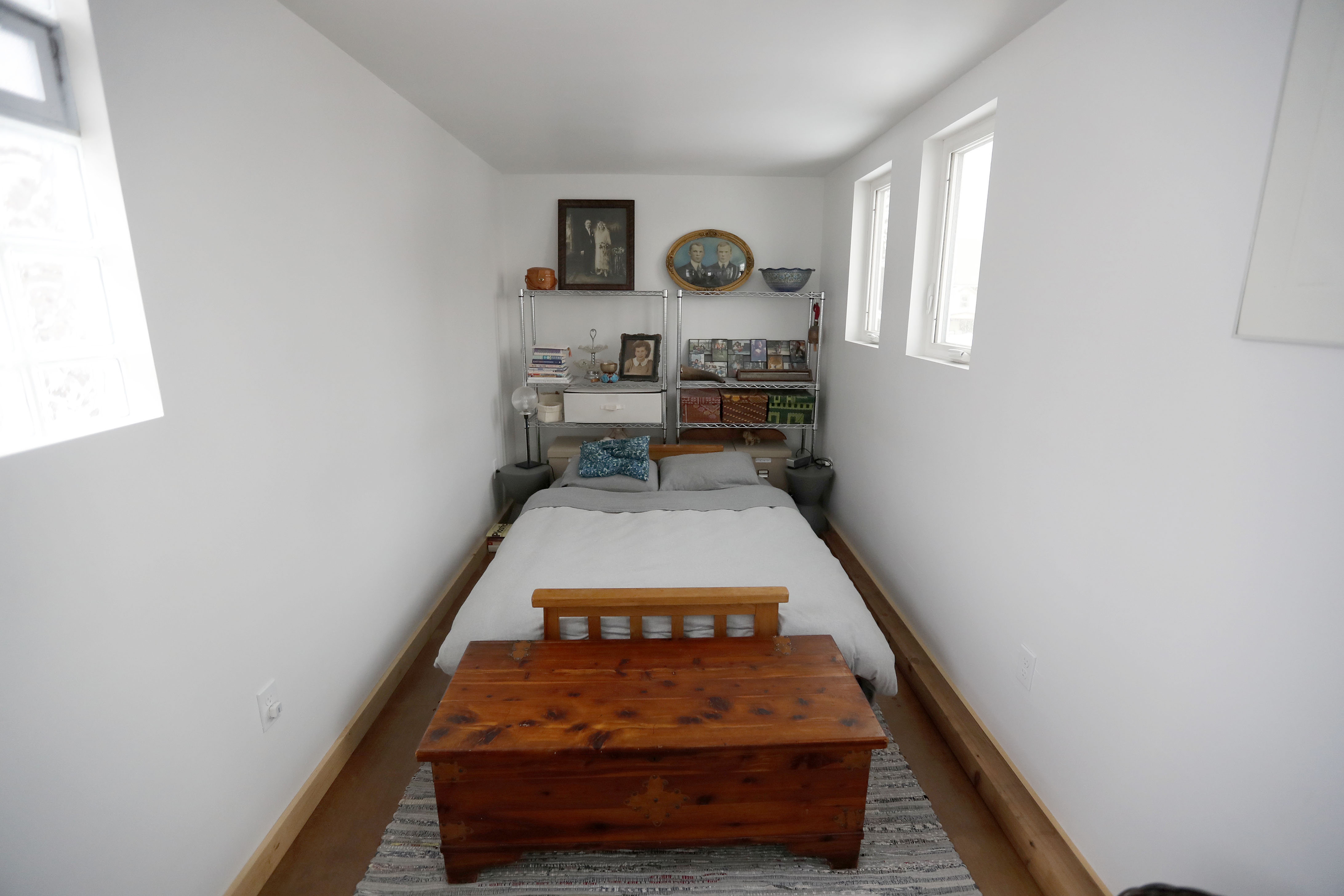 The house at a glance

Layout: The L-shaped, 462-square-foot home features a main floor and an upstairs bedroom. A galley kitchen combines with the 7-foot-wide main living space. There’s a 3½-by-5-foot bath and an area near the entrance for a closet and laundry area (both behind curtains); coat rack; chest of drawers; small freezer; desk, and shelves for books, photos and art supplies. A partial foundation that measures 24 feet long by 6 feet wide by 4 feet high houses utilities and provides storage space. There’s also a front garden for growing vegetables, a private deck/courtyard in back overlooking perennial gardens, and a small shed.

Windows: Glass block in front for privacy. Large curtainless windows overlooking the back.

Do you live in a shipping container home or other unconventional structure? Please email smartin@buffnews.com. Photos welcome. 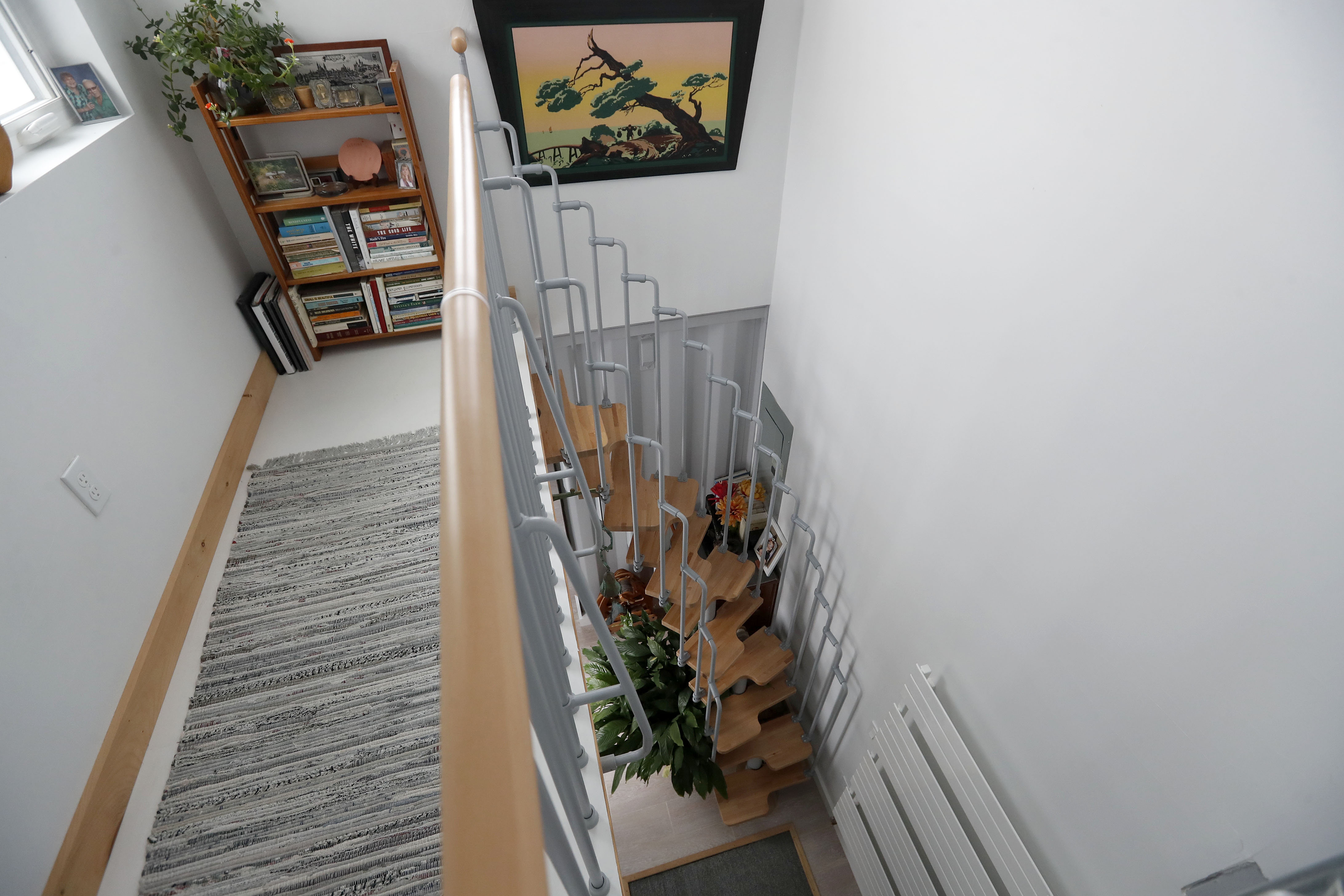 Love your home? Tell us about it

Today we feature the home of Donna Stepien and Ignacio Villa.

The Buffalo News continues to look for other local homes and the stories behind them and their décor. Those chosen will be displayed in the weekly feature at BuffaloNews.com. The residence also could be chosen as a Home of the Month.