Trust me on this: Samuel Clemens was there.

The timing Tuesday at the Fredonia Opera House was simply too perfect. Beyond the grave or not, you could almost feel the bemused shade of the author and humorist we know best as Mark Twain watching intently from the back of the packed hall, where hundreds of noisy residents – asked only to refrain in those fragile seats from blowing kazoos or stamping their feet – lived out a phenomenon unlike anything they had seen before.

The place was jammed with residents of every age, some shaking pompoms, some hollering spontaneous oaths of loyalty to the Fredonia Beaver Club, all of them standing with a roar once Amanda Brinkman hustled onto the stage. She is co-host of a reality show, “Small Business Revolution,” and her high-profile arrival was the signal that Fredonia would receive $500,000 in investment while serving as the seasonlong focus of a show about igniting American small business.

The revelation triggered bedlam. To say Fredonia rallied collectively does not really capture it. The line to get into the hall stretched across Church Street and into Barker Commons, and as a guy with a certain amount of Fredonia DNA – I spent my first five years of life in a rental along Route 20, then returned years later for college – all I could think about was Clemens, and the sesquicentennial of his arrival.

It was 150 years ago this month, almost to the week, that he descended upon Fredonia as part of a speaking tour. His audience embraced him with such passion and warmth that he decided the village would be a perfect spot for his mother and sister.

At the time, Clemens owned a piece of the old Buffalo Express newspaper, and he wanted Jane Clemens and Pamela Moffett nearby. While his own enchantment with the community wore off fast, to put it gently, he had immediate family in Fredonia for many years after he himself left Western New York.

The village at the time was one of the temperance hot spots of America, meaning it was not an easy place to find a drink, hard to imagine amid the prospering taverns of today's college town. In one of his letters to his family, Clemens apologized – kind of – for an eruption in which he called a Fredonia banker “a detestable oyster-headed bore,” a burst of foul temper that biographers speculate was due in no small part to the lack of alcohol. 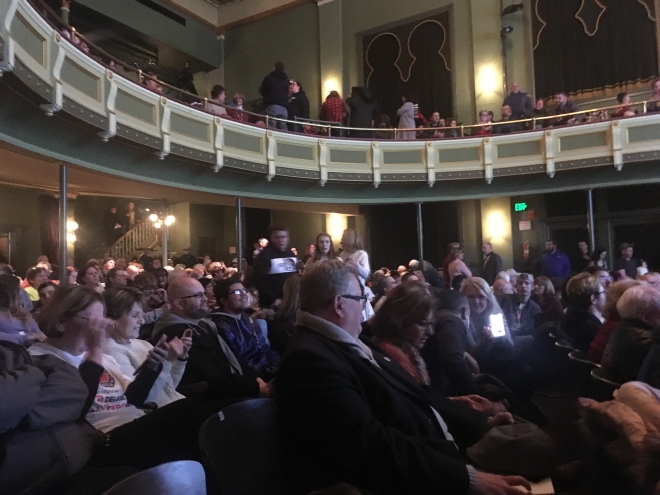 By the time Clemens wrote his autobiography, his ire at the village had reached such a point that he would not even mention it by name, preferring to refer with acid sarcasm to its neighboring city, as in:

"We got all our talent from that stud farm at Dunkirk."

As a native, I loved the line and always hoped to see it on a T-shirt. So if Clemens – a guy with a fascination for what today we might call popular culture – was roaming around his "stud farm" in phantom form on Tuesday, I like to think he was pleased by the general sense of raucous intemperance touched off by fixer-upper reality TV.

The credit begins with Grace Czechowski, a 28-year-old Fredonia native working in Washington, D.C. She is a fan of "Small Business Revolution," which features Brinkman and “Extreme Makeover” legend Ty Pennington, and Czechowski appreciates both the energy and attention the show brings to American small towns. 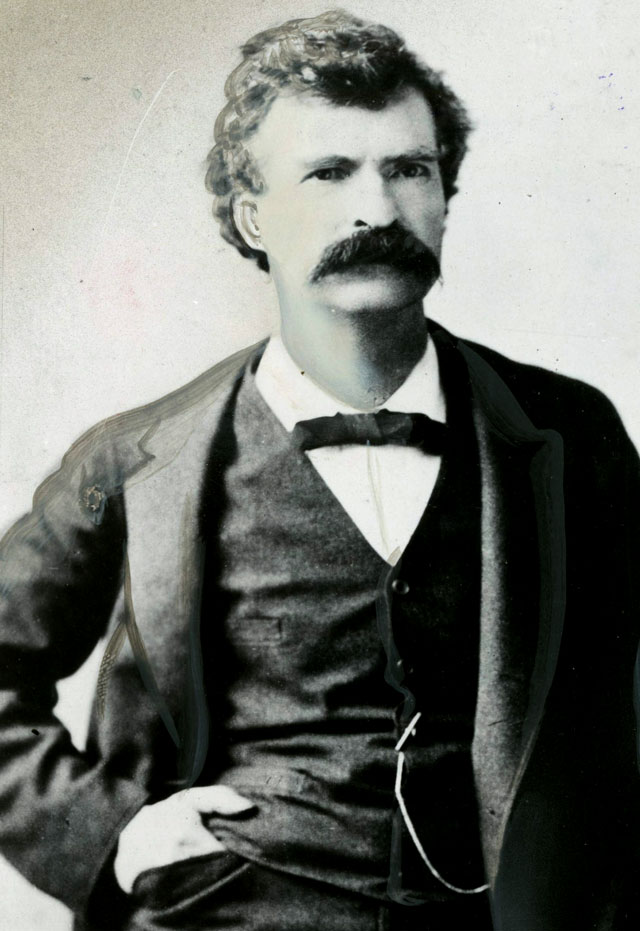 As a child, she often strolled to downtown Fredonia in search of cinnamon buns at a place called Upper Crust. Her adult travels reinforced her belief in her hometown as a "unique place," so she nominated Fredonia when "Small Business Revolution" asked its viewers for potential locations.

Her leap of faith struck gold. The producers chose it as one of 10 finalists, setting off a geyser of civic support. The village proceeded to reach the final five, with the winner decided by digital voting. Put to that test, Fredonia's frenzied boosters brought home the $500,000.

No one contends it will reshape the village by itself. The larger point made Tuesday by Mayor Doug Essek is that the real victory must involve civic philosophy.

For the last 60 years or so, a lot of the commercial energy in both Fredonia and Dunkirk flowed away from their downtowns and toward lookalike chain stores and restaurants near a remote Thruway exit. The psychic blow of closing Fredonia's old Red Wing plant a few years ago – an operation known as Carriage House when it locked its doors – hardly helped, taking away a plant whose scent of ketchup once served as autumn perfume in the village.

"I hope this is the spark, the catalyst, Fredonia needs to pull itself into the future," Czechowski said of Tuesday's celebration.

Derek Jusko, operator of Rhythm & Grooves, a Fredonia record store, is a young guy with Woodstock-style hair and 2020 instincts. He offered his own dreams as he stood on the steps of the Village Hall, watching hundreds of Fredonians whooping it up in the street.

The best chance for the downtown tapestry, he said, is the notion that residents really dedicate themselves to local merchants, rather than the easy option of heading for the chains and megastores. The "Small Business Revolution" – for all the clatter and flash of reality TV – is primarily a reminder of that truth, and the proof of how it works will be seen once it is gone. 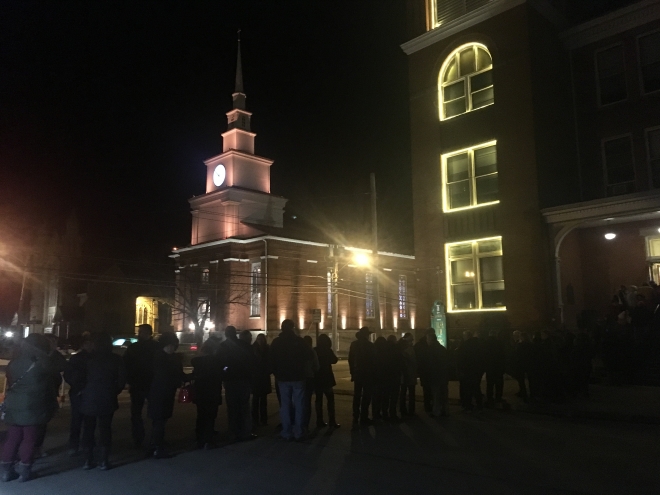 A line waits to get into the Fredonia Opera House before Tuesday's Small Business Revolution announcement. (Sean Kirst/Buffalo News)

"It's one thing to have it," Jusko said, "and another thing to own it."

That is the paint-and-drywall retail side of it. Clemens, if somehow he was present in the back, would undoubtedly have been more intrigued by Steve Crane, who brought a French bulldog named Isabelle to the Opera House. He would have studied the many grandparents carrying wide-eyed children, such as Mary Piazza with her 3-year-old grandson Braxton, all wanting to be sure these kids remember such a big day in Fredonia.

And Clemens, who traveled the West before cementing his legend in the East, certainly would have appreciated Nancy and Bob Joy, who spent most their lives in Fredonia, moved to Arizona 11 years ago – and then chose to come back.

Asked for their motivation, the couple raised their hands toward the crowd around them, including college students and young parents and gray-haired contemporaries.

This was Fredonia, and they were home.

The evening ended in a kind of giant pub crawl, a long leap from the temperance capital of a century ago. If Clemens was truly there in spirit, I have to believe he enthusiastically went along, knowing the "Small Business Revolution" at least guarantees this truth.

Whatever happens, it seems free from any oyster-headed bores.