The Buffalo Diocese ended its 2019 fiscal year $5 million in the red, due primarily to a big decline in donations amid a scandal over clergy sexual abuse from decades ago.

Donations in 2019 fell by nearly a third compared to 2018, according to a Buffalo News analysis of the diocese’s latest financial statements.

A Chapter 11 bankruptcy filing is “imminent,” the diocese cautioned, because its financial situation is so dire.

The News estimated the year-to-year decline in donations by analyzing three major sources of revenue to the diocese’s central administrative offices in 2018 and in 2019: the Fund for the Faith, contributions and bequests, and diocesan assessments. All three are based upon parishioner giving.

"Diocesan offertory has declined since August 2018, resulting in budget shortfalls for the 2019 fiscal period," wrote the Rev. Peter J. Karalus, vicar general and moderator of the curia for the diocese, in an introduction to the financial statement. "Diocesan administration and the Finance Council are addressing these income trends, have reduced spending where possible and further reductions in ministries and services will be necessary."

It was the second year in a row the diocese operated at a loss of more than $1 million. In 2018, the operating deficit was $1.8 million.

The diocese’s bottom line took a significant hit from reduced investment gains in 2019 compared with the previous year. The diocese sold $17.7 million in investments to pay for its Independent Reconciliation and Compensation Program, thus reducing the size of the portfolio upon which income could be made in 2019. 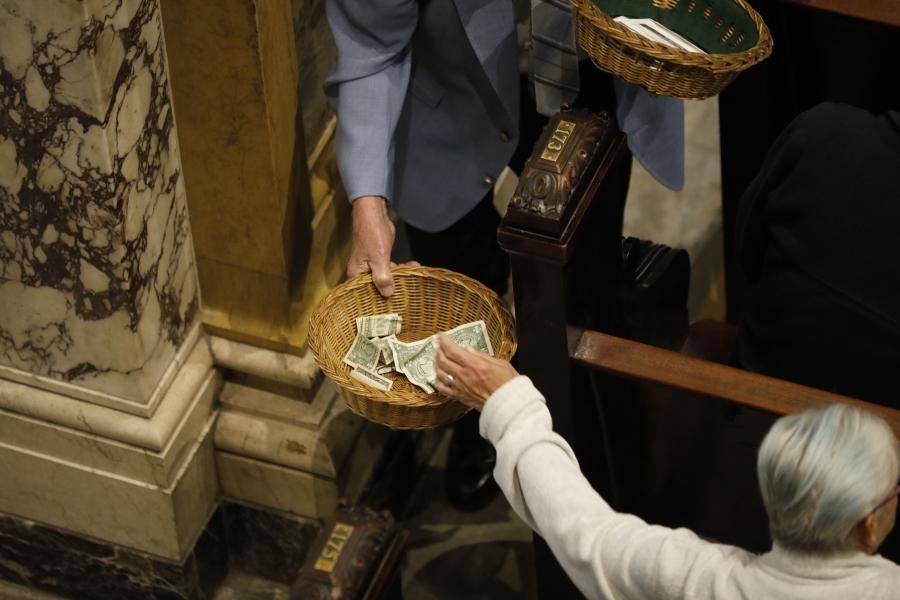 A worshipper donates money during the collection at Mass at Our Lady of Victory Basilica in Lackawanna on Oct. 13. (Derek Gee/News file photo)

The current financial statement is the first to reflect the impacts of the diocese’s clergy sexual abuse scandal, which began unfolding in late February 2018 when the Rev. Norbert Orsolits admitted molesting “probably dozens” of boys several decades ago. The admission led to revelations of other sex abuse cases, an investigation by the state Attorney General’s Office, a federal probe featuring multiple subpoenas and FBI interviews of dozens of potential witnesses and more than 230 lawsuits against the diocese. Ultimately, Bishop Richard J. Malone resigned amid growing frustration over his handling of the scandal.

The diocese’s fiscal year runs from Sept. 1 through Aug. 31 so last year’s financial statement included just six months of the start of the scandal, which escalated later in 2018 and continued through 2019.

The financial statement painted an ominous picture of the diocese's future finances. It cautioned that a Chapter 11 reorganization for the diocese was “imminent” and noted that the diocese had $17.1 million in assets available to meet cash needs for general expenditures within one year.

“The ability of the [diocese’s central administrative offices] to remain as a going concern and meet its obligations as they become due is dependent on the outcome of the anticipated bankruptcy proceeding and the settlement of abuse claims and lawsuits filed, and those that may be filed during the one-year window commencing on August 14, 2019,” the notes of the financial statement said. “These factors create substantial doubt about the [diocese’s central administrative offices] ability to continue as a going concern for the year following the date the financial statements are available to be issued. The financial statements do not include any adjustments that might be necessary if the [diocese’s central administrative offices] is unable to continue as a going concern.”

Bishop Edward B. Scharfenberger, who took over after Malone's resignation, has said a bankruptcy filing was a "probability."

The diocese listed overall net assets of $24.4 million, the lowest since 2002.

Assessments are a good indicator of overall parish offertory giving, because the diocese “taxes” all 161 parishes, taking a percentage of their annual collections based on a formula.

The diocese’s financial report doesn’t include revenue and expenses for 161 parishes and 34 elementary schools. The Catholic Health system and Catholic Charities are separately incorporated non-profit organizations and are not included, either. Nor does the report include $64 million in net assets overseen by the Foundation of the Roman Catholic Diocese of Buffalo, a non-profit organization incorporated in 1996 to raise and administer funds on behalf of “the educational, religious, and charitable needs of the Catholic Diocese of Buffalo.”