Christopher Frunzi of Hamburg stepped forward during a tense time, when a city was desperate for calm, and hugged Ken Nwadike.

Their 2016 embrace in Charlotte, N.C., became a viral moment that will be celebrated this weekend when a new beer commercial airs during the Super Bowl.

But what viewers won't see and couldn't know is that far from the spotlight of those troubling nights, Nwadike returned the favor to a man who became a needed friend during some dark days.

Frunzi, who graduated from St. Francis High School in 2002, was on duty with the Charlotte-Mecklenburg Police Department when Nwadike, who started the Free Hugs Project after the Boston Marathon bombing, walked up to a group of officers.

It was a tense time in the city, when protests and violent riots broke out after the shooting death of an African American man by police.

Frunzi and other officers were stationed on a city street, and Nwadike, wearing a black T-shirt with Free Hugs in white lettering on the front, walked near the officers. Frunzi motioned him over and told him, "Thanks for being out here and being peaceful," as they hugged. Nwadike got called out by protesters, but he defended the officers.

"Christopher stepped out of line to give Ken a hug," said Frunzi's father, Peter. "And nowadays they're still friends." 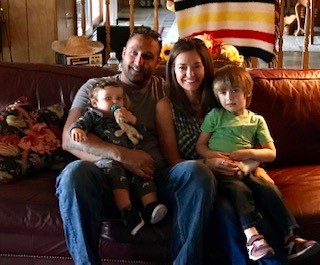 Christopher and Jill Frunzi and their children, Bennett, 2, and Jackson, 5. (Photo courtesy of Peter Frunzi)

"When the two kids got sick, the first person who put a GoFundMe out there was Ken," Peter Frunzi said.

He said the money raised has helped Christopher and his wife, Jill, with costs involved in traveling to St. Jude Children's Research Hospital in Memphis, Tenn., where the children are being treated. Jackson is in remission, and Bennett is undergoing additional chemotherapy because the tumor resurfaced.

Christopher Frunzi moved to Charlotte in 2008 to pursue the opportunity with the police department. He has since been promoted to sergeant.

And the hug that was seen around the world apparently was seen by those in marketing for Anheuser-Busch, the producer of Budweiser.

Frunzi and Nwadike are two of more than a dozen "typical Americans" featured in the minute-long commercial, which also features a variety of people doing "typical" things, such as fighting a fire, coming home from the military, pushing a car in the snow or winning a championship.

The commercial was criticized by a Charlotte city councilman, who told the Charlotte Observer it was in "bad taste." A spokesman for Budweiser said the commercial is meant "not to trivialize anybody's actions" but to "show the American spirit."

Frunzi's father said it also shows something else.

"You don’t know what a hug today is going to do down the road in your life," Peter Frunzi said. "If people would just take a second to treat each other nicer for a minute, you never know how it’s going to work down the road."

Police officer in viral video from Charlotte is from Hamburg