The annoying dweeb who has been a colossal pain in my dupa for the past 36 years somehow landed a kind, loving, intelligent woman named Tayra who is gorgeous inside and out.

I know, I don't get it either.

The thing about Tayra is that she is calm. That's the only way to describe her. She exudes peace. Watching her and how she goes about life – raising her kids, making a home, spending her free time – inspires me to be more like her.

At first it was just, "Hmm. She's nice to be around." But when I visited her home in Cortland, the tranquility was palpable. And despite having two small children, there was zero clutter. I started actively trying to figure out how she made that harmony happen and how I could replicate it in my own chaotic life.

After grilling the lovely gal, here's what I've learned so far.

All those plastic toys give everyone anxiety – not just the adults. Only one toy was visible on the first floor of Tayra's house: a little wooden kitchen with some toy food made out of felt. It kept my kids enthralled for our entire visit. The kids had more toys elsewhere in the house, but not many.

"The kids feel it when we have too many toys," she said.

The extra toys are like obstacles, blocking the way to the stuff they really enjoy, she said. In turn, they end up being messy and destructive with the "obstacle" toys.

Thinking back, I remembered how my kids used to play with their toy kitchen more than almost any of their other zillion toys. I realize now I could've kept their kitchen, a couple of dolls, blocks and animal figures, and ditched almost everything else. 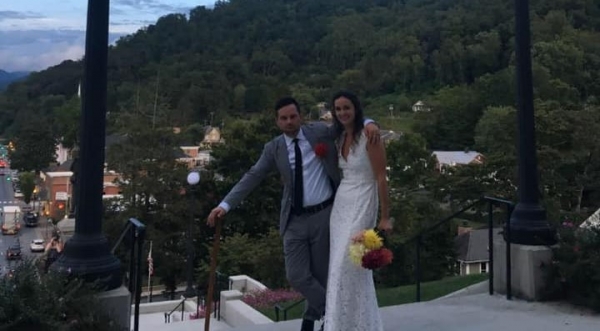 The author's brother, Joe Maziarz, and Joe's wife, Tayra Fedorka, in August on their wedding day in the Smoky Mountains. (Contributed photo)

She's always making something. Who has time to shop or worry when you're redoing the woodwork in your house, building a compost bin or making mason jars full of granola?

Tayra is a working acupuncturist and has a part-time retail job. She often spends her free time doing more work, but meaningful work that she enjoys and can share with her family. For her, staying active (especially outdoors) recharges her batteries better than vegging out in front of the TV. Don't get me wrong: I'm not telling you to feel guilty for paying for conveniences or cutting corners. I'm the corner-cutting queen at home. It just opened my eyes to how my sedentary lifestyle actually saps my energy.

She opts for natural, high-quality and recycled materials. Tayra's house is gorgeous, and she and her dad did all the work themselves. One major reason her house (built in 1807) feels so nice is because of its natural wood and stone. Get this: She and her dad came across another old but long-neglected house slated for demolition. They approached the owner, who agreed to let them remove some of the home's woodwork and hardware for a negotiated price, and they used it to embellish Tayra's house as she fixed it up. The materials were superior to (and less expensive than) anything they would've found at Home Depot for the remodel.

Almost all of the furniture and decor in Tayra's home is second hand. She has spent years thoughtfully gathering pieces she loves from garage sales, thrift stores and want ads. That way, she's able to buy well-made, beautiful things for a fraction of what they would've cost new. The same goes for clothing for herself and the little ones. She doesn't buy a ton, and she buys it all second hand. What she does buy is deliberately chosen for its quality and durability. Somehow, everything the kids wear looks pristine, but somehow my kids' brand new Target wardrobes are worn and faded.

Don't get me wrong, Tayra is not one of those insufferable people who is self-righteous about her lifestyle and tries to foist it on other people. She's just conscious about how she goes about her days and what works for her.

Bottom line, I guess, is that Tayra is the anti-consumer. And I want to be just like her.