Time and again, we remind people in Western New York just how good the fishing is right here in our backyard.

Lake Erie, Lake Ontario, the Niagara River, the Great Lakes tributaries, Chautauqua Lake, the Erie Canal, the inland streams are natural resources that combine to form a collective powerhouse of angling diversity that includes a long list of fish species to pursue.

Thanks to a recently released 2017 Department of Environmental Conservation Statewide Angler Survey, our invaluable part of the state is but a piece of the Empire State’s complete sport fishing picture. It’s an economic driver valued in excess of $2.14 billion to the state, supporting nearly 11,000 jobs in 2017. These are impressive numbers, great documentation for using sport fishing as a tool to assist with the promotion of our natural resources and tourism on the local, regional and state levels. It also can be promoted on an international level, too.

The survey, conducted every 10 years or so since 1973, assesses the biological and human dimensions that come with managing the state’s freshwater fisheries. It addresses angler effort, expenditures and attitudes by anglers randomly selected for the survey from all who carried a valid fishing license for 2017. Emails were sent to those who had them; a hard copy of the survey was mailed to those who didn’t have electronic communication.

Some very interesting information came out of the survey. Freshwater anglers fished nearly 20 million angler days in the state’s inland and Great Lakes waters. Over $250 million was generated at-location through bait, lodging, groceries, restaurants and guide services. Of the $2.14 billion mentioned earlier, 26% ($564 million) was from nonresident anglers.

In the breakdown of the types of gamefish that attracted the most interest, 44% pursued warm-water game fish, 28% targeted cold-water game fish, 11% focused on panfish and the remainder was a mix of fish species.

In the percentages of anglers by body of water, nearly half (49%) of all anglers fished in inland lakes and ponds in the state. A total of 25% fished inland streams and rivers. 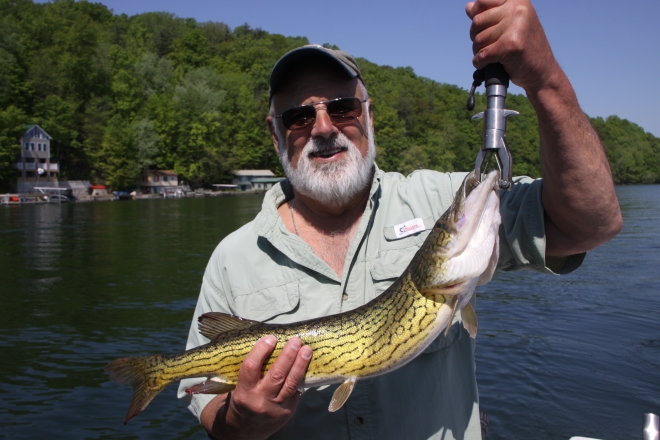 Chris Kenyon of Wolcott shows off a Cayuga Lake pickerel. Nearly 50% of angling effort is on inland lakes and ponds in the state. (Bill Hilts Jr./Buffalo News)

In the Great Lakes of Erie and Ontario, the main lakes generated 11% of angling activity, 6% came from tributaries, 2% came from the Niagara River and 3% came from the St. Lawrence River. It is here that we must insert a caveat. Timing is everything.

In 2017, Lake Ontario suffered its first “100-year” tragic flooding that impacted the entire system. A record-high water level, combined with state-of-emergency situations along the lakeshore for boat speed, closed marinas and access areas/launch ramps, painted a picture of a closed lake. It wasn’t until later in the summer that we saw relief and anglers slowly returned to enjoy what turned out to be a record-high catch rate for Chinook salmon. The Niagara River saw high water levels that impacted many access points. The New York Power Authority fishing platform at the Niagara Project was closed until September. The shoreline along Artpark and the gorge was extremely limited. Fishing from boats was difficult.

When it was all said and done, Lake Ontario was the worst year for angler use based on the DEC open lake creel census conducted on the lake every year. It was not because the fishing wasn’t good. It was the perception that people had based on available information. Had the survey been the year before or the year after, the results could have been much more positive. Despite this negative anomaly, the economic impact numbers are still impressive.

Lake Erie had its own story. Had the survey been in 2019, angler participation would have seen a spike in activity. In fact, boat trips – primarily from an outstanding walleye fishery – were the highest the lake has seen in New York waters since 2001. Part of this lake’s problem is the limited access with not enough working launch ramps along the shoreline. 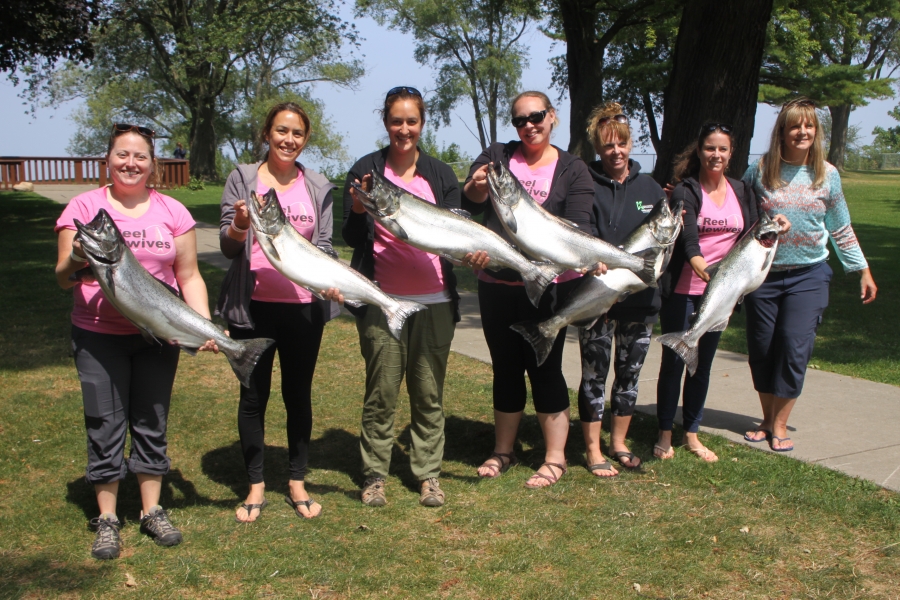 Getting more women involved with fishing is important for the future of the sport, a key component to the ladies-only Reelin' for a Cure tournament held each year out of Wilson and Olcott in August. (Bill Hilts Jr./Buffalo News)

Angler demographics need to change. Fishermen on average are older than the general population, with a large segment being male. In the general population, 49% are male. In the overall group of anglers, 90% are male. We need more women to be involved with this pastime and we must continue to recruit the next generation of anglers to lower the average age. This is our charge as protectors and stewards of these resources.

At the top of the list of the most sought-after game species, largemouth or smallmouth bass were No. 1 in every DEC region across the state. Other popular species were brown trout, brook trout and walleye, followed by rainbow trout. Nonresident anglers preferred bass, Pacific salmon and brown trout. 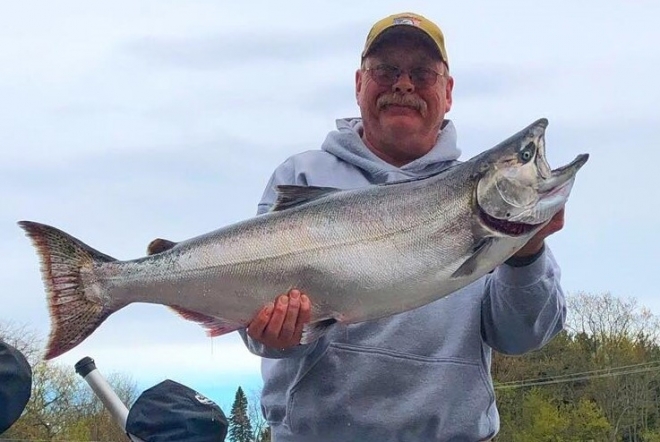 Robert Mueller of Hamburg holds up the $15,000 grand prize salmon in the Spring Lake Ontario Counties Trout and Salmon Derby from 2019. Special events like the LOC will attract anglers from all over the country. (Photo courtesy Robert Mueller)

In the bait department, nearly half of all fishermen (46%) use some type of live bait. Baitfish was the most used at 38%, especially in DEC Regions 5 through 9.

There is a tremendous amount of information in the 2017 survey. We are just scratching the surface. If you would like to analyze it, check out https://www.dec.ny.gov/outdoor/56020.html.

If you are not part of the angling crowd, give it a try. Free fishing days in New York are Feb. 15-16.