At the Charter School of Inquiry just off the Kensington Expressway, a "founding fathers" artwork features prominent African Americans instead of Jefferson and Madison, a "periodic table" highlights the contributions of people of color, and a music teacher during a drumming session points out that drumlines originated at African American colleges and universities.

And it’s not even Black History Month yet.

That, in fact, is the whole idea behind infusion, the concept of incorporating the contributions of blacks as an integral part of the everyday curriculum, not as an add-on, so that black students see themselves in the inspiring contributions of others and white students also get a more thorough education.

It is one of the pillars of the Edison Avenue school, founded five years ago on the belief that students are more likely to be engaged in a curriculum if they find relevance in it – something white students have the luxury of taking for granted.

On paper, it makes perfect sense.

The only problem is that it’s not working yet on the papers that count for so much: New York State’s assessment tests.

As CSI awaits word on its charter renewal application, officials believe the school is poised for improved scores and are cautiously optimistic they will be given the chance.

"I feel like we’re just beginning to hit our stride," said Helene Kramer, the former Buffalo School Board president and Read to Succeed executive director who helped found CSI, which was like "building a 747 while it’s in flight" given the challenges of finding a building, hiring staff and recruiting kids.

As the name implies, the school uses an inquiry-based model that builds on students’ natural curiosity, said John W. Sheffield, head of school since July 2018 and whose experience includes leading both the Elmwood Village and South Buffalo charter schools. That means encouraging – and respecting – students’ questions and using them as a jumping off point for inquiry, as when a student pondered an astronaut removing his helmet in space and wondered if his head would explode or implode.

That ties in with the school’s "responsive classroom" approach that emphasizes students’ social and emotional growth along with academic achievement and recognizes that a teacher’s approach to students and the language used matters.

Yet it’s the third pillar of CSI’s three-pronged approach that is most inspiring and that can be seen throughout the school. 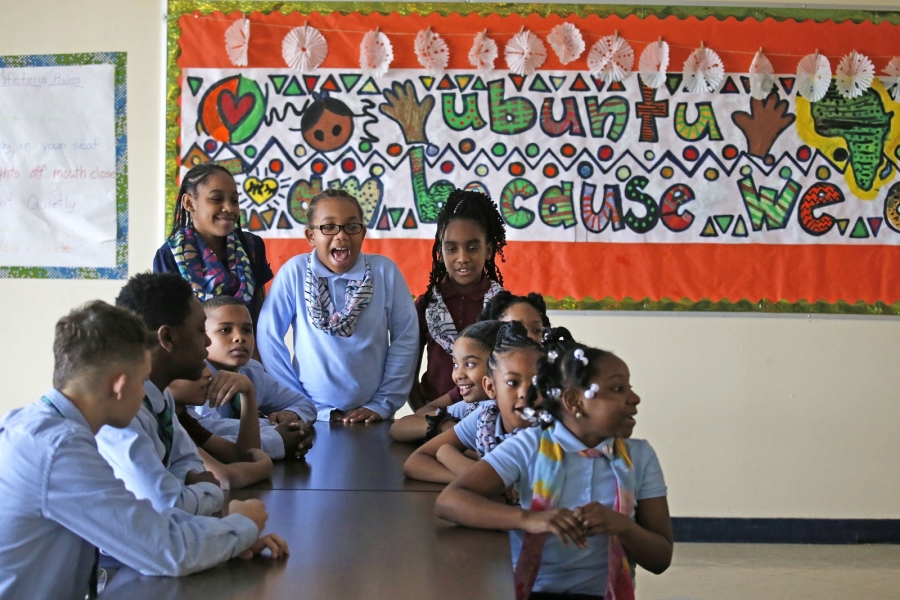 Students gather in the cafeteria of Charter School of Inquiry. (Robert Kirkham/Buffalo News)

Sheffield found the "We the People ..." artwork at the Juneteenth Festival. Students who pass it every day see not only the opening words of the Constitution’s preamble, but images of Thurgood Marshall, Colin Powell, Andrew Young and other blacks who’ve made significant contributions to this evolving nation. A Periodic Table of Black History on another wall lists everyone from Arthur Ashe and Ralph Ellison to A. Philip Randolph and Beyonce. Astronaut Mae Jemison is on another wall.

In fact, walking the halls is an immersion in black accomplishment that is a silent but potent message to the K-6 school’s 315 students, 86% of whom are black.

The message is reinforced in the classroom. Andea Pawarski’s fifth-grade art class is studying the work of Edreys Wajed, one of the contributors to the Freedom Wall public mural at Michigan Avenue and East Ferry Street. He visited the school and told the kids how music influenced his work, so they were listening to music as they drew.

The children themselves also are on the walls. In one display, they draw themselves and fill in the blank "I like my ___". The answers range from eyes to nose to hair, and it’s impossible not to recall the negative stereotypes long associated with such features on African Americans and the impact that had on generations of black children. CSI’s children should not have that problem.

In fact, the school has created an environment that should prove fertile for achievement. Yet only 17.3% of its students were proficient in English language arts last year and only 13.7% made the cut in math – figures below the Buffalo Public Schools averages.

So how long will it take before CSI’s program manifests itself in improved test scores?

Co-founder Peter Dow contends that is the wrong question, arguing that accountability based on test results is a very narrow definition of success.

"Are they going to achieve the American dream?" asked Dow, a co-founder of Firsthand Learning, a nonprofit organization that promotes inquiry-based teaching."These kids have to believe they can achieve, and it’s not just on these two tests."

Nevertheless, those two tests will go a long way in determining the school’s fate, even if CSI’s percent of economically disadvantaged kids – 92% – is slightly above the 89% figure for the city school district, and even though charters operate with less financial and other support than traditional public schools. 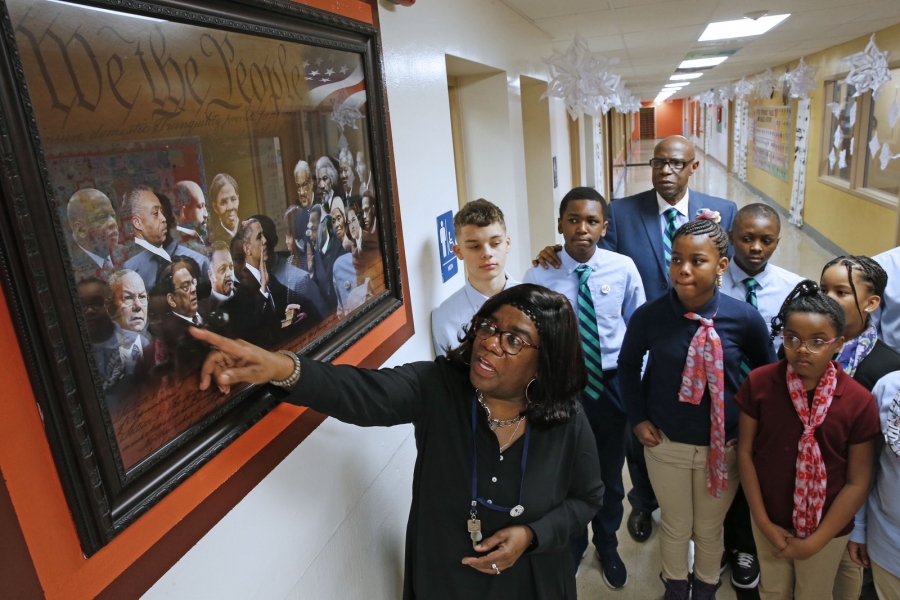 Teacher Elaine Champion discusses some of the African American historical figures depicted in a painting in a Charter School of Inquiry hallway. (Robert Kirkham/Buffalo News)

"We get the residual effects behind things that happen in the summer," said school social worker Tamieka Johnson, citing neighborhood violence, homelessness and utility shut-offs as among the challenges kids face and that schools must deal with before learning can begin. "We can’t help where they come from, but we can try and meet their needs when they walk in this door."

That also means grooming them to take their places in society, recognizing that a lot of misbehavior stems from what the youths themselves have gone through.

His goal with the school’s young gentlemen’s club – there’s also an etiquette club for girls – is to make them recognize they are part of something bigger than themselves, in part by instilling the African concept of ubuntu: I am because we are.

"We are launching kids to be successful individuals in life," Bell said.

But, like it or not, the school’s success may be judged much more narrowly.

When she visited CSI last fall, local Regent Catherine Collins found engaged, inquisitive kids who asked lots of questions about her job, questions she was happy to answer.

"If you can’t see me, you can’t want to be me," she said, mirroring the school’s philosophy on inclusion.

But Collins also noted that academic performance "tells the story."

A State Education Department team that visited the school will make a recommendation on CSI’s charter renewal to the Board of Regents. Charters typically are not shut down after their initial five years; instead, state officials offer advice and time to make improvements. That’s what CSI officials are hoping will happen, based on recent conversations with state officials and a deeper dive into the test scores that Sheffield said shows growth not reflected in the overall numbers.

With its infusion efforts, CSI is filling an obvious need in a culture still woefully ignorant of exactly how this nation was built. Some things need to be learned, even if they are not on a test.

But the bottom line is that kids also must be able to demonstrate proficiency in math and English.

CSI should be given more time to prove that those two goals are not incompatible.