It was a television commercial that ran thousands of times on the local TV stations we watched in Western New York, both Buffalo stations and channels that would come in via cable and antenna from Hamilton and Toronto.

After grainy old film shows a nearly bald Bobby Hull skating in a Chicago Blackhawks uniform in the opening of the commercial, the former NHL star confides, “I know the pain and anxiety you’re feeling, I lost my hair in front of the world.”

House of Masters in Toronto offered the hair replacement system that allowed “the Golden Jet” reclaim a full head of hair, after he had “suffered through hairpieces, weaves, potions, lotions.”

The Hall of Fame winger wasn’t overstating it. Hull’s hair loss really was a topic of conversation even as the he skated as “the best single drawing card in the NHL.”

But in the same 1969 column that all-time hockey writer Stan Fischler wrote that, he also wrote that “Bobby Hull, the Samson of hockey, is losing his hair. And we all know what happened to Samson when his locks disappeared.” 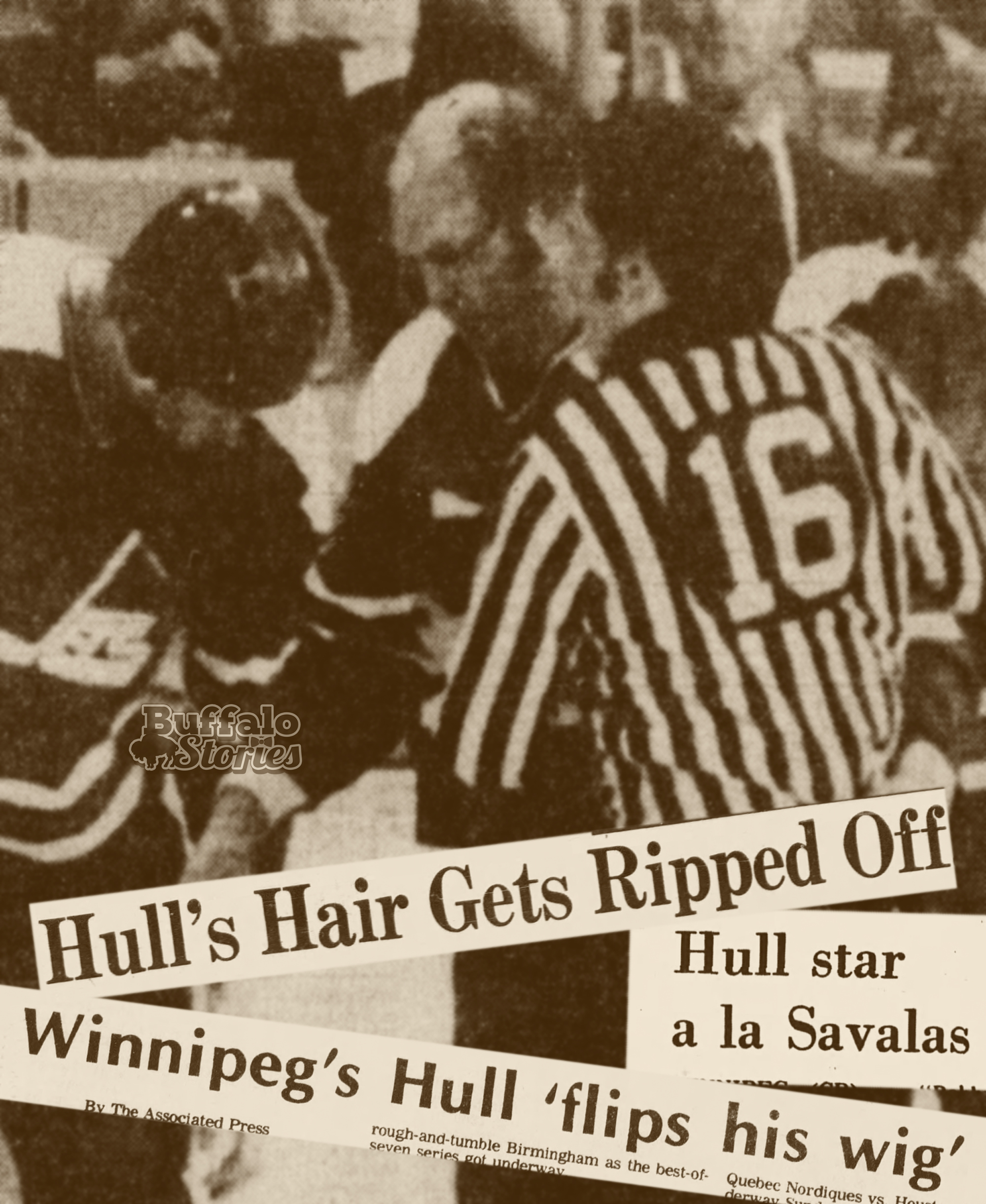 Winnipeg Jets winger Bobby Hull, after his toupee was ripped off during fight in 1978. The photo ran in newspapers all over North America with very creative headlines.

The pinnacle of Hull’s baldness embarrassment came in 1978 when he was playing for the World Hockey Association’s Winnipeg Jets. He wasn’t wearing a helmet when he scuffled with Dave Hanson of the Birmingham Bulls during a playoff game.

Hanson, who later starred as one of the Hanson brothers in the movie “Slapshot,” grabbed and ripped off Hull’s hairpiece. The only known photo of the incident is grainy, but Hull’s bald head is perfectly clear as it was carried in newspapers all over North America. Hanson went to the penalty box for interference and Hull went to the dressing room. He came back out moments later wearing a helmet, and scored a power play goal during Hanson’s penalty.

“Bobby Hull is a lot like Telly Savalas,” said Jets Head Coach Larry Hillman after the game. “He shows you can be a star with or without hair.”

The incident might have inspired the closing line of the commercial where Hull says, “Don’t let anyone else mess with your hair.”

The commercial played most often during the most inexpensive time slots. You were more likely to see it during a Saturday afternoon Bruce Lee movie on Channel 29 or after midnight on late night TV, like during David Letterman’s show, as this was recorded.