The heart-shaped wooden sign set in the ground along Main Street in Amherst in front of a nature sanctuary simply reads "Larry."

Someone placed it just west of a Metro Bus shelter where, one year ago after a bitter night when temperatures dropped below zero, Larry Bierl was found frozen to death.

Bierl had no permanent home, but he did build a makeshift camp in the sanctuary of tarps, cast-off furnishings and other items he collected, since removed by volunteers and town workers.

He was well-known in sections of Amherst and Williamsville, where he stopped by fast food restaurants and coffee shops for something to drink or eat. Bierl's death in one of the region's wealthiest suburbs led to an outpouring of sympathy, donation offers and questions about whether anyone could have done more to help Bierl.

"It’s that fine tension between protection and allowing them their own free will,” said Pamela Walck, who regularly chatted with Bierl over two decades but never broke through the wall Bierl put up.

One year later, Bierl's death remains painful for people who work with the homeless. The case shows homelessness is not just an urban problem, and it highlights the challenges facing organizations that serve this population.

Many of the homeless have mental health or addiction issues. A small number, like Bierl, rebuff offers of assistance.

Still, agency officials say they've had success in working with a community that – despite the attention showered on Bierl – often goes unnoticed or ignored by the general public.

One area of focus is a coordinated effort to get more of the homeless off the street on winter days. Bierl was the first homeless weather-related death here in several years, officials said, and they're doing what they can to prevent a repeat.

“You have this sense we should have done better," said Jean Bennett, director of housing and homeless services for the Restoration Society and chair of the Western New York Homeless Coalition.

Larry Bierl was found dead in this bus shelter on Main Street close to the I-290 entrance. (Sharon Cantillon/News file photo)

Niagara Frontier Transportation Authority police discovered a body at 10 a.m. Jan. 31, 2019, at the bus shelter between the Tony Walker Center and the LaClair-Kindel Wildlife Sanctuary.

His death came at the tail end of a blizzard that left more than 20 inches of snow in Williamsville and featured a low of minus 3 degrees the night in question.

Within hours, the NFTA confirmed the 69-year-old victim was Bierl, who frequented the Walker Center and its Tim Hortons, the McDonald's at Union Road and the Spot Coffee.

Bierl in 1997 told The Buffalo News he moved from the Kensington-Harlem area to Williamsville in the early 1990s. He declined to discuss his family or to have his picture taken, and identified himself only as Larry.

The weathered-looking, bearded Bierl kept his hair in long dreadlocks that reached far down his back, and he dressed in layers, especially in the winter.

As news of his death spread, people flocked to social media to share their encounters with Bierl. Most recalled offering him a cup of coffee, a sandwich, warm clothing or cash, but his background was shrouded in mystery.

[RELATED: Williamsville mourns Larry, a man with no home but many ties to the village]

Walck said she first saw Bierl around 2000 redeeming bottles at what was then Quality Markets on Main Street. She introduced herself at McDonald's and asked if she could sit with him.

She offered to drive him to the doctor, to church, to a shelter or anywhere else he desired. He never accepted, nor did he ever call after taking her phone number.

" 'I got a room on Kensington.' That’s what he’d always say," said Walck. She knew that wasn't true.

He mainly offered yes or no responses to questions from Walck, who worried about him. "I'd say, ‘Larry, I’m praying for you.' ”

Bierl's family provided a statement following his death that described the toll his mental illness took on his parents and filled in more details, noting Bierl earned a master's degree and refuting the rumor he was a veteran.

"While our family felt helpless, we took comfort in knowing that he must have felt safe in Williamsville as he chose to stay," the statement said. The family declined to comment out of respect for his lifelong desire for privacy.

They try to get the homeless into permanent housing and offer meals, clothing, showers, lockers, a place to clean their clothes, or access to medical and dental care.

“We’re trying to meet them in their comfort zone,” said Joseph Heary, executive director of the nonprofit Friends of the Night People.

The organizations say this population has held stable here while changing over time. There are more women and young adults but almost no veterans, said the Restoration Society's Bennett.

Another challenge in providing assistance to the homeless is the prevalence of mental illness and addiction, conditions amplified by the stresses of living on the streets, said Kenneth Houseknecht, executive director of Mental Health Advocates of Western New York.

The agencies coordinate their efforts, particularly when winter storms and dangerously cold temperatures put the homeless at greater risk.

In that case, a team on a Code Blue van drives around to locations where homeless people are known to stay to encourage them to go to a warming shelter instead. Between 75 and 85 people spend those nights at the Holy Cross warming center.

The van's operators knew about Bierl and tried to find him the evening he died but were unsuccessful because they didn't know about his nature sanctuary camp, said Bennett. 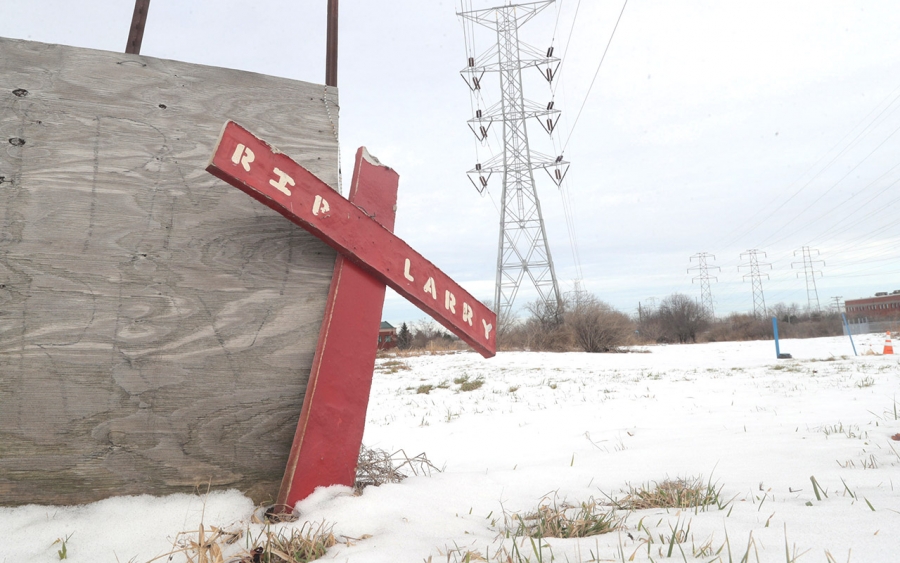 A cross in Bierl's honor near the area where Bierl lived in Amherst. (John Hickey/Buffalo News)

The life Bierl forged in Amherst and Williamsville – some residents remembered encountering him as far back as the 1970s – partly explains why his story resonated so widely after his death.

"He defied a lot of the conventional homeless stereotypes. He wasn't in the city. He was in a suburban location. He wasn't a guy who was entirely in the shadows," Houseknecht said.

Bierl's homelessness in the suburbs was not unique to him, of course. A mother and her adult daughter apparently live out of a car that parks in the Village and Town of Hamburg, including outside Tops Market and Valu Home Center.

Houseknecht, who lives in Hamburg, said he didn't know about them, but his son and daughter-in-law have brought the pair food, supplies and clothing.

"It's everywhere. It's like it's right under all of our noses and we don't even see it," he said.

The manager of the Tops there has seen the pair parked in the lot at various times since last winter, said Kathy Sautter, a company spokeswoman.

"Our store manager has informed the police, but we were told they really can't do anything about it as they are not disturbing anyone," Sautter said in an email.

Officers who talk to the women say they have gas in their tank and sufficient food, including for their cat, said Hamburg Village Police Chief Michael Melisz.

"They say, 'Well, we're between apartments right now.' You know what I mean? Then you offer them help and they refuse it," Melisz said.

Most of the homeless do want aid and willingly go to shelters, said Skylar Diamond, a homeless outreach case manager with the Matt Urban Center.

A small number want to be left alone. “Usually it’s because they don’t think they need the help,” Diamond said. 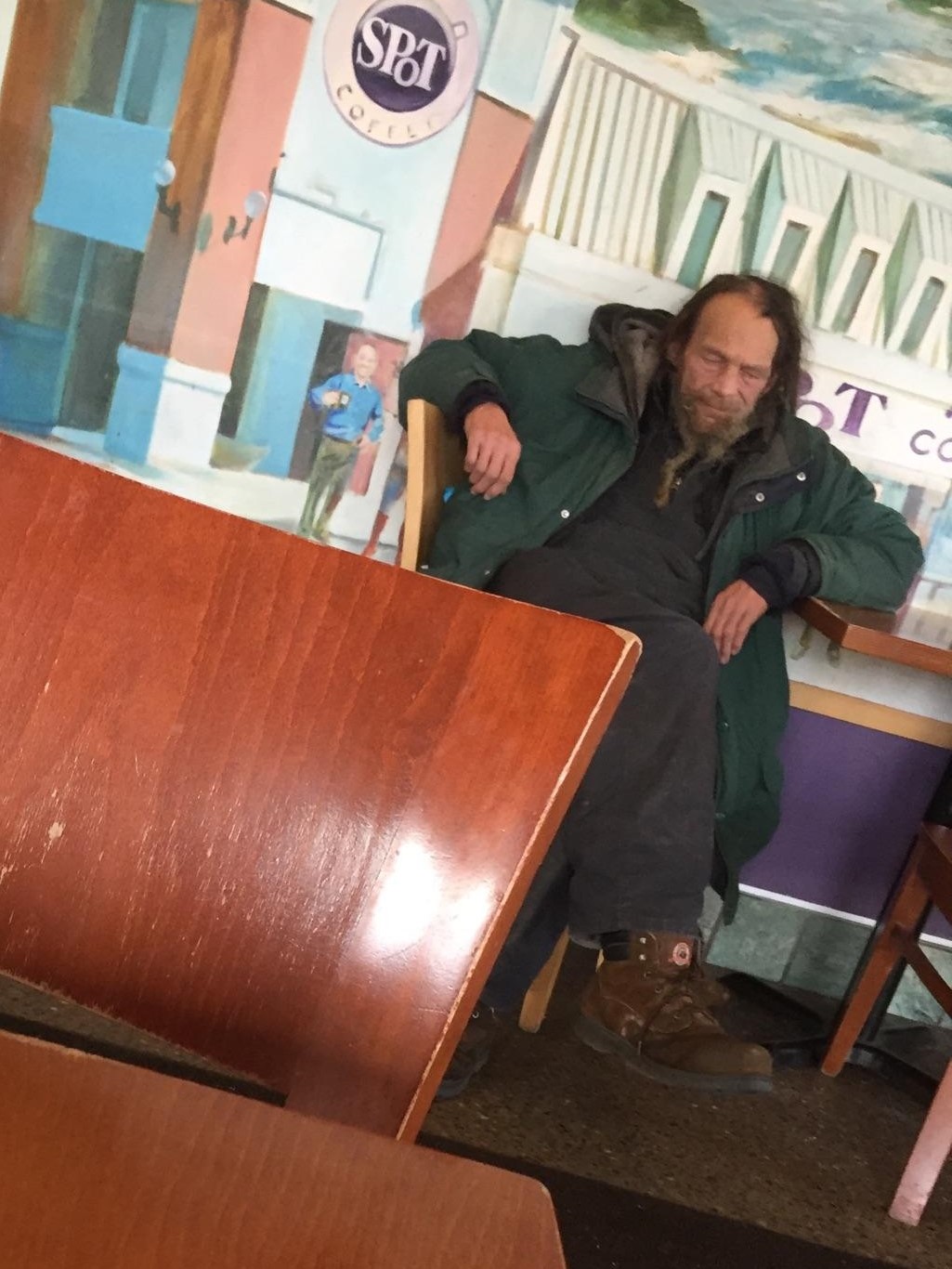 Before his death in 2019, Lawrence Bierl was often spotted in area coffee shops like Spot Coffee in Williamsville. (Photo courtesy of Carole Taylor)

That was the case with Bierl. He never panhandled, but he would accept a cup of coffee, or a few dollars, when he wanted. Otherwise, he politely turned down the offer.

Amherst police and social services agencies, not to mention store employees, all had contact with Bierl over the years. His family, too, said they engaged when he was willing.

"We always took great care of Larry," said Amherst Police Chief John Askey. The department has no record an officer encountered Bierl on the night he died.

That day, Bierl stopped by the Reikart House, a luxury hotel just up the road in Snyder, probably because the blizzard closed the nearby Tim Hortons.

He visited twice, accepting lunch and coffee, but declined offers of a room for the night or a ride somewhere else, devastated hotel staffers said the next day.

As news of Bierl's death spread, some responded by donating online toward his funeral expenses. A GoFundMe campaign collected $8,130 in donations from 310 people in the first 24 hours.

When his family politely declined, the organizers decided to give the money to Friends of Night People.

Diamond and others urged the public to call 211 if they ever see someone who appears to be homeless outside at night in freezing temperatures. And even something as simple as saying hello and making eye contact helps to humanize the homeless population.

The attention Bierl received in life and after his death was notable but, Bennett said, "That same kind of focus and compassion would be great all the time."