For 18 years, ecologist Robert Johnson has filed reports on Chautauqua Lake in dry, analytical language, logging the number and density of plant species in the shallow lake bed. Lakes are political, Johnson knew, and he didn’t want to squabble with local officials or residents over how they managed the plants.

But late last summer, Johnson boated out to conduct his usual survey.

And in sections of the lake, he dredged up little more than sediment.

“Usually I don’t say anything – I just report the data,” Johnson said. “But in this case it was very obvious something had happened.”

Johnson now finds himself tangling with lake politics in a way he’d long hoped to avoid, together with a coalition of environmental and conservation groups. In early January, his firm, Racine-Johnson Aquatic Ecologists, published a blistering report linking spring 2019 herbicide applications along the lake’s shoreline to significant plant death in the south basin.

The herbicide program, which just concluded its second full year, is intended to control two invasive plants that periodically build up in areas of the lake, clogging its shoreline and blocking boats. But since 2017, a melee of property owners, conservationists, anglers, boaters and local politicians have clashed over the safety and wisdom of the program, bickering in tense public meetings and trading barbs in their newsletters and the local media.

For many, the Racine-Johnson report has not only further raised the stakes, but it challenged the county to honor its commitment to “science-based” herbicide decisions at a time when even lake-bed surveys are panned as partisan.

“Just like anything, there's so many viewpoints,” said John Shedd, an executive at the Chautauqua Institution. “It's just that science shouldn't have that many viewpoints. It should be science.”

Two aquatic ecologists who reviewed the Racine-Johnson report for The News agreed that its methodology was both fair and credible. The report found that large sections of Chautauqua Lake’s shallow, nutrient-rich south basin were essentially barren when researchers trawled it for plant growth in September and October. Separately, researchers observed extensive algal blooms last summer, a problem of increasing concern to residents, scientists and politicians the state over.

Some loss of plant life was expected. The south basin, especially a shallow, weedy area called Burtis Bay, has for decades contended with messy periodic buildups of two invasive plants, called Eurasian watermilfoil and curlyleaf pondweed. With the approval of the state Department of Conservation, several lakefront municipalities applied herbicides to control the plants in 2018 and – on a much larger scale – in 2019. Both the type of chemical and its early spring application were intended to limit harm to native species.

But Johnson, who has conducted annual plant surveys for the Chautauqua Lake Association since 2002, had major concerns about the health of the lake ecosystem after the application. Not only did he see fewer native plants, which serve as habitats for fish and other organisms, but he feared the lake would potentially become turbid over time if plants weren’t there to compete with algae and bacteria.

Other factors could have contributed to the “radical” change, Johnson acknowledged, such as nutrient runoff or climate change. But based on nearly two decades of data, he felt confident herbicides were to blame.

“You can never be positive, as a scientist,” Johnson said. “But I’m pretty positive in this case.”

To the Chautauqua Lake Association, the 68-year-old nonprofit group that funds Johnson’s research and conducts extensive lake maintenance of its own, the report was an immediate call to arms. The CLA does not oppose herbicides, said Doug Conroe, its executive director. But it has raised concerns about drift and other unintended consequences, and clashed with property owners – particularly those belonging to the Chautauqua Lake Partnership, a rival group – who say the spring applications went well. 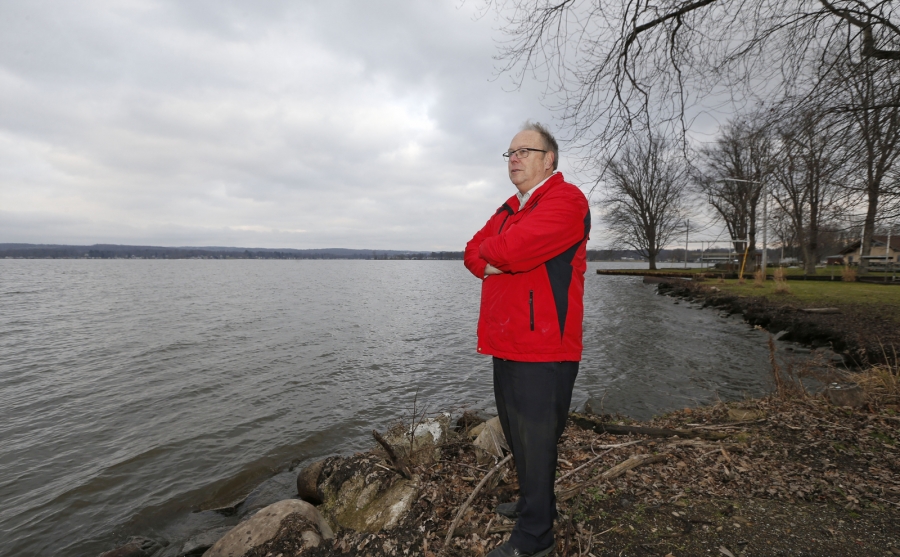 Doug Conroe, executive director of the Chautauqua Lake Association, looks at the lake and has watched its ups and downs from their launch in Lakewood. (Robert Kirkham/Buffalo News)

A 2019 memorandum committed lakefront municipalities and other stakeholders to “science-based decisions” on weed control and other issues. It did not, however, specify the source of the science or how the lake’s health should be weighed against the wants of its users.

“But I'm an optimist,” he added. “I believe if people hear the facts and the truth, then at some point they're going to say, ‘I understand.’ ”

‘Everyone can go out and do a study’

Since Johnson published his report, however, the facts – as well as Johnson himself – have come under attack. Lake ecologists and other observers say these sorts of battles are common, both in New York State and across the country. At a time of growing polarization and sinking trust in traditional authorities, neither science nor scientists have escaped the politicization of their work, which is generally meant to be unbiased.

In a memo circulated to local officials earlier this month, the herbicide applicator contracted to treat Chautauqua Lake questioned Johnson’s experience, conclusions and scientific methods – though Johnson has worked with the company, SOLitude Lake Management, in the past.

“By all measures,” SOLitude told The News in an emailed statement, “that treatment was a success.”

State Sen. George Borrello also panned the Racine-Johnson report as “biased” and “slanted,” citing CLA’s financial involvement with mechanical harvesting and other herbicide alternatives. The Chautauqua Lake Association expects to receive $700,000 this year to run a slate of harvesting, shore maintenance and monitoring programs, Conroe acknowledged, though his organization does not direct Johnson’s research, and Johnson says he makes no profit from the relationship.

“My concern is the bias that I see in who funded the study and what their agenda is,” said Borrello, who worked on weed management as the former Chautauqua County executive.

“Racine-Johnson is a good organization,” he added. “But I believe they started out skewed from the folks who were paying the bill.”

As the weeks have passed since Johnson first published his report, a competing narrative has also emerged about the health of the lake’s ecosystem. According to Borrello and other herbicide proponents, Johnson’s findings are directly contradicted by a third-party survey conducted in early summer by a county contractor.

That contractor, Princeton Hydro, concluded that herbicide treatments had cut down on weeds without killing other, native plant populations. Its methodology also was fair and credible, said two aquatic ecologists.

But compared to the Racine-Johnson report, the Princeton Hydro survey looked at much smaller sections of the lake and in a different season, before many plants have reached peak growth. Because of that, the two “rival” studies don’t truly conflict, said Chris Holdren, a consultant whose research has informed the North American Lake Management Society’s position on herbicide treatments.

Both, moreover, should be considered seriously as scientists and policymakers seek to better understand the lake, said Courtney Wigdahl-Perry, a professor at SUNY Fredonia and a scientific adviser for the Chautauqua Lake and Watershed Management Alliance. The Racine-Johnson study is “significant,” Wigdahl-Perry added, though she stopped short of backing Johnson’s conclusion that herbicides alone likely caused the plant die-off.

"There’s a lot of passion, a lot of emotion around Chautauqua Lake,” said Chautauqua County Executive PJ Wendel. “Everyone can go out and do a study, but what's the scope? Each one has different values and criteria." 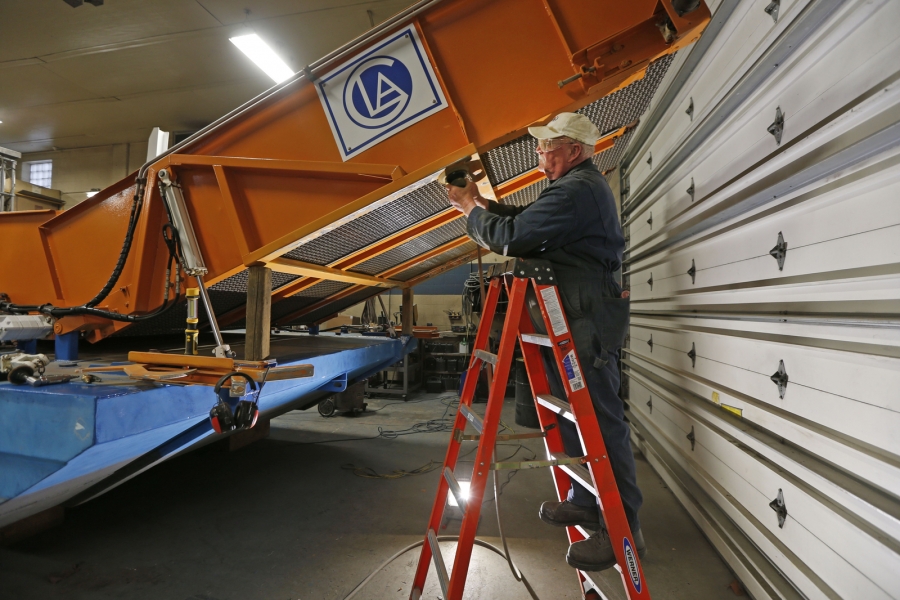 Steve Peterson, a worker and dump truck operator at the Chautauqua Lake Association, sands the paint on one of the weed harvesting vessels, preparing it for the first sign of spring at the association's winter shop in Lakewood. (Robert Kirkham/Buffalo News)

For Wigdahl-Perry, who studies algal blooms on the lake, the answer to the current conflict is more science – not less. She said she’s hopeful that more researchers will take an interest in its complex ecosystem. On Lake George, a coalition of scientists from Rensselaer Polytechnic Institute and IBM are seven years into a massive project to track everything from water salinity to the food web. A similarly collaborative, continuous monitoring program could also help answer major questions about Chautauqua, Wigdahl-Perry said, including the all-important question of whether native plants recover this year in the south basin.

But there are signs the ongoing scientific debate will strain collaboration in Chautauqua, particularly as the 2020 spring herbicide season grows near. Borrello said some advocates are “throwing bombs” and “trying to start a war.” He would not specify which advocates.

And Conroe, of the Chautauqua Lake Association – the organization that has long sponsored Johnson’s research – said that, while he feels pressure from funders to keep the peace with other groups, he increasingly fears he can’t do that without “ignoring” the facts. (Conroe is not above some scientific invective of his own, either: Asked about the Princeton Hydro report, he called it “compromised” and “hurried,” and said its “mathematics have come under serious fire” from critics.)

“I try to stay out of all that – the public meetings, the politics,” said Johnson.

“It’s a very charged situation, and it’s probably going to get worse,” he added. “There are just a lot of stakeholders. And a lot of misinformation.”