Apollo still jumps up, barks and wags his tail when Erie County Sheriff's Deputy Robert Galbraith puts on police gear each morning. For three years the 6-year-old German shepherd worked at Galbraith's side as a narcotics detection dog and tracker.

But Apollo doesn't leave for work with Galbraith anymore.

Last spring, the Sheriff's Office unceremoniously retired Apollo, even though the police career of a healthy K-9 his age would last at least three more years.

The reason: Apollo, like other drug dogs in his class, is trained to sniff out marijuana. That makes K-9s trained to detect that drug increasingly obsolete.

Medical marijuana has been legal in New York State since 2014. And last year, state lawmakers took steps to decriminalize marijuana used for recreational purposes, reducing the penalties for possession of small amounts of the drug. This year, the push is on once again in Albany to fully legalize and regulate recreational marijuana.

"We believe, in the Sheriff’s Office, that the writing’s on the wall," said Undersheriff Mark Wipperman.

So instead of Apollo leaping into the back of Galbraith's K-9 configured SUV, he stays at home as a house pet while Galbraith drives to work with his younger four-legged partner, Ares.

The two dogs are not friends.

"He is extremely jealous," Galbraith said of Apollo.

In April, the Sheriff's Office began the monthslong process of retiring five veteran narcotics detection K-9s and bringing in new drug dogs that are not trained to sniff for marijuana. Galbraith's newest dog, Ares, is among this new class of K-9s, purchased with asset forfeiture money, which often comes from drug-related arrests.

The changeover led to tough decisions for K-9 handlers like Galbraith who developed strong bonds with their animal partners. To satisfy a K-9's intense work drive, the handler and dog must train together every day and recognize each other's subtle cues.

"It was kind of heartbreaking," Galbraith said.

The County Legislature is adopting a resolution to allow the K-9 handlers to purchase their retired drug dogs from Erie County for $1. 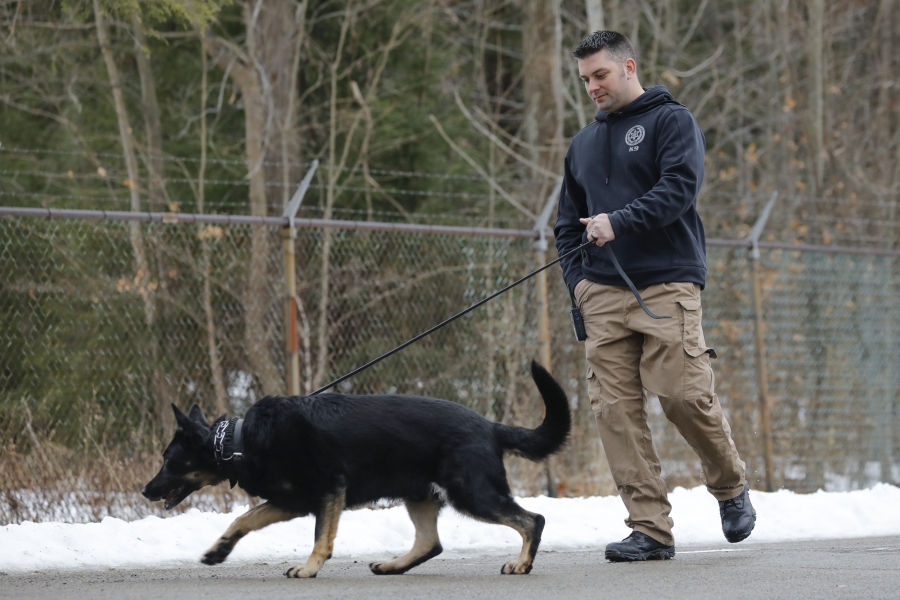 Apollo was a huge asset to the Sheriff's Office. He is also trained to detect heroin, cocaine and methamphetamines and to serve as a tracker – skills he can no longer use for the Sheriff's Office because of the liability of him sniffing out marijuana. During Apollo's career, he assisted in the recovery of more than 20 kilos of cocaine, hundreds of pounds of marijuana and large quantities of heroin. The cases he played a role in resulted in the seizure of vehicles and more than $1 million, Galbraith said.

As a retired dog, Apollo still needs expensive medications to stay healthy, which Galbraith couldn't afford to pay for on his own. A drug company donated the medication when it learned of Apollo's circumstances so Gailbraith didn't have to give him up.

"He was my first dog," he said. "I guess it would be kind of like giving up a family member."

Not all police departments are abruptly retiring their veteran drug dogs.

For one thing, it's expensive.

Each of the K-9s in the Buffalo Police Department cost between $7,500 and $9,000 to purchase, said Capt. Jeffrey Rinaldo. The department spends another $7,000 to $8,000 for the training and equipment for the dog and its handler.

For that reason, the Buffalo Police Department is not retiring all of its drug dogs. Instead, as each K-9 reaches retirement age, it is replaced by one that does not detect for marijuana. The first of this new K-9 class came into the department last year. Two other city K-9s that detect for marijuana remain in service.

The Amherst Police Department has only two K-9s, both of which are fairly young and only one of which is primarily used for drug detection. There are currently no plans to prematurely retire either dog, said Assistant Chief Charles Cohen.

Other agencies, like the Niagara Frontier Transportation Authority, still remain tied to federal agencies that consider marijuana to be an illegal and banned substance. Therefore, the NFTA Transit Police is making no changes to its K-9 program.

The Erie County Sheriff's Office has more resources to transition its K-9 unit, the region's largest unit with 17 working dogs.

"On the Narcotics Unit, their main focus is looking for the heroin and fentanyl, the drugs that are killing our youth," Wipperman said.

Aside from its four Narcotics Unit drug dogs, the Sheriff's Office employs five bomb detection dogs, one accelerant/fire investigation K-9, one cadaver dog, two therapy dogs and four additional drug dogs who continue to sniff for marijuana and other drug contraband at the two county jails, Wipperman said. Many of these stockier, imported shepherd dogs are also cross-trained for tracking.

The Sheriff's Office's K-9 unit is so established that it now runs it own K-9 training program and employs a chief of community services, who is also a trained veterinarian.

In light of so many recent K-9 retirements, including those that retired for age and health reasons, the Sheriff's Office has worked with the SPCA Serving Erie County to establish a K-9 retirement fund. The fund ensures that handlers who want to keep their retired dogs can afford the medication needed for the dogs to live comfortably, Wipperman said.

For Deputy Robert Lundberg, who spent four years as a K-9 handler, there was no doubt that his 6-year-old German shepherd, Haso, would stay with him. Over time, the two partners would read each others' body language the way others might read a book.

Haso would leap and spin at the start of each work day. Then he would sniff Lundberg's pants. Haso knew if his partner wore sweatpants, they were going for a walk. If Lundberg wore his training uniform, Haso knew the two of them would train together. And if his handler wore his patrol uniform, they were on duty.

During their off time, the two camped and hiked together. The dog quickly won over Lundberg's family.

"My father would trade me in for him," Lundberg said, laughing.

In April, Haso played a key role in the arrest of a city parking meter mechanic and a substitute teacher. After deputies stopped the city employee's vehicle on the Scajaquada Expressway, the K-9 searched the SUV and discovered a bag of cocaine hidden in a side air vent on the dashboard. The Sheriff's Office ultimately seized a half kilo of cocaine, 15 grams of fentanyl and $7,500 in cash from the couple's car and North Buffalo home.

But Lundberg is proudest of Haso's success as a tracker. He recounted how Haso sniffed the pajamas of an elderly Clarence man with dementia who had wandered away during the night. Haso traced the scent into the woods and found the man.

"That’s the stuff that matters," Lundberg said. "So, I regret that he can’t have more of those experiences and more of those opportunities to serve."

Transitioning a working police dog into retirement isn't always easy – for the dog or the handler.

When Galbraith started leaving Apollo at home last spring and bringing his new K-9, Ares, to work instead, the deputy had to adjust to a household that suddenly had two driven, high-intensity dogs requiring daily mental and physical stimulation.

Ares, a large Belgian malinois, started out untrained and broke out of four or five kennels at Galbraith's house until the handler was finally able to install a climate-controlled kennel outdoors. 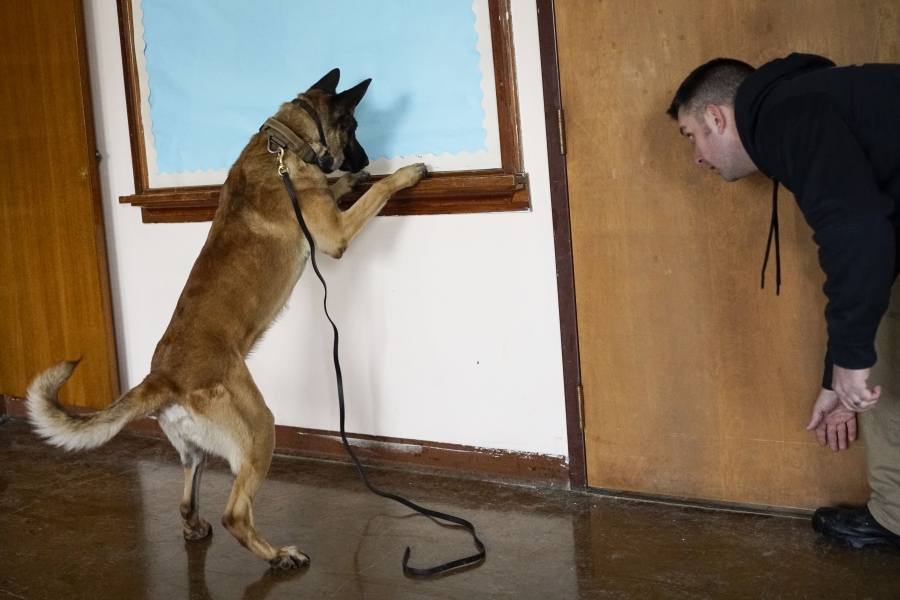 K-9 Ares alerts that he has found a substance during training with Erie County Sheriff Deputy Robert Galbraith in the former Our Lady of Sacred Heart School in Orchard Park, Friday, Jan. 24, 2020. (Derek Gee/Buffalo News)

Now almost 2, Ares completed his certification in drug detection and tracking in November and is working out well. Apollo, meanwhile, still despises Ares but has otherwise made a graceful transition as a family dog.

Lundberg chose to step away from the physically demanding job as a K-9 handler after Haso retired in October. The deputy now works as a school resource police officer in Springville.

The toughest part of the transition was the first time Lundberg left the house in his police uniform without Haso. Lundberg, who lives alone, could hear his dog inside barking, whining and crying. Lundberg felt so bad that when he came home later, he took Haso to a pet store and let the dog pick out anything he wanted. The deputy ended up paying $140 for toys and accessories.

Working police dogs only get to play with toys as a reward for good work on the job, Lundberg said. When Haso retired, he went from being a dog who lived in a nice outdoor kennel with no toys to being an indoor dog with a new bed, lots of toys and plenty of time to flop on the floor for belly rubs.

"I could not have asked for a better dog," Lundberg said. "He's one in a million."