Wegmans shoppers did something this weekend that they will never do at that grocery chain again: use plastic bags.

The state law banning single-use plastic bags in grocery stores does not take effect until March 1, but Wegmans decided to stop using them more than a month early.

Shoppers over the weekend nearly universally praised the reasons behind the shift away from the bags, citing their harm to the environment because they're made using petroleum and don't decompose. Still, most of those shoppers picked plastic at the Wegmans checkout for the last time, including Denice Juliano, a retiree living in Cheektowaga who forgot four reusable bags in her car before she came into the store on Dick Road in Depew.

"I put a reminder in my Notes app for tomorrow,” Juliano said.

The intention of the new law is to encourage people to move toward reusable bags. Those who do not bring or buy them will have the option of paying 5 cents apiece for paper bags. Wegmans will donate the profits from the paper bags to local food pantries.

The need to retrain her thinking is similar to remembering to return cans and bottles when the state imposed a small deposit, she noted.

“I’m ready to transition into this,” Juliano said of the reusable bags. “It’s for a good cause. We need to do it. It’s for the generations to come.” 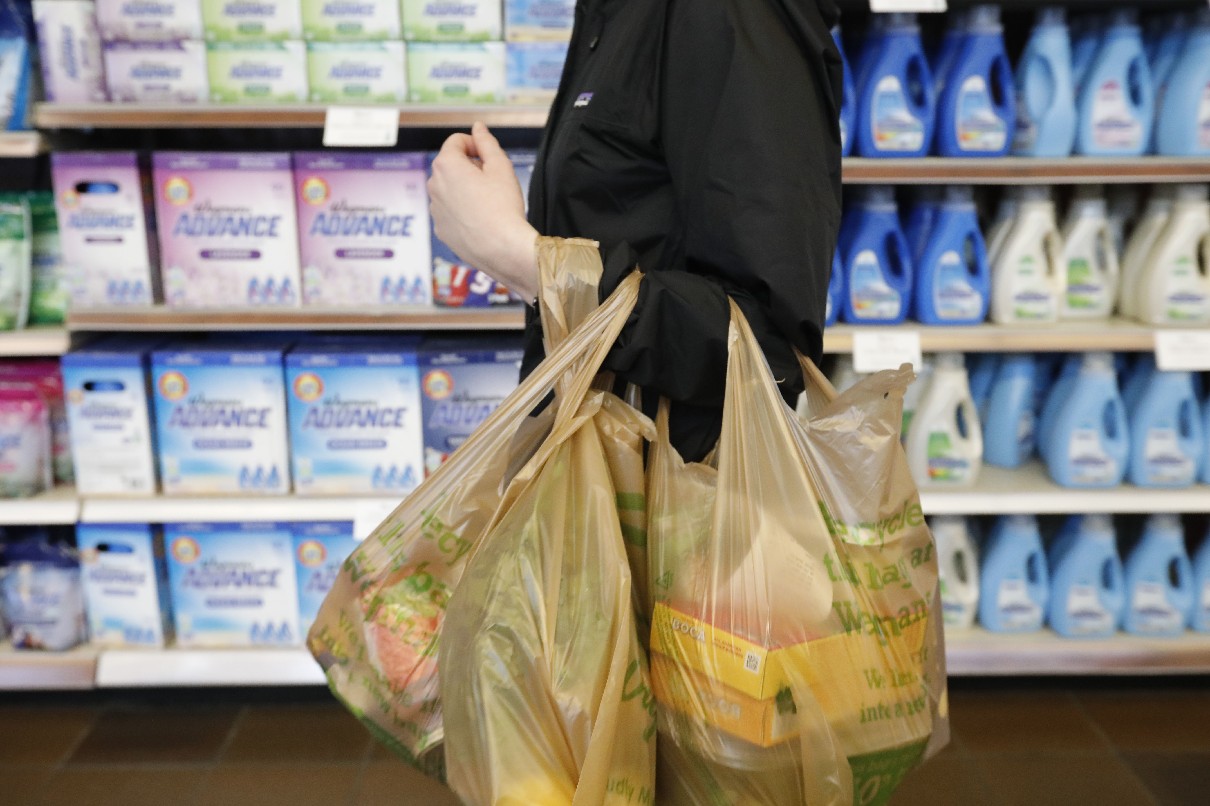 A Wegmans customer leaves the Amherst Street store with an armful of groceries in plastic bags. Starting Monday, that will no longer be an option. (Derek Gee/Buffalo News)

While Wegmans is ahead of the curve in the state, New York is behind the curve compared with some states and countries, some shoppers noted. Among them are 90 countries, including France, Italy and China, and seven states, including California, Connecticut and Maine.

Diane Santi was shopping at the Wegmans on Amherst Street in Buffalo this weekend with her sister Dorene Startek, who lives in the Elmwood Village.

“It’s about time we become environmentally aware and take care of our Earth,” said Santi. “And we certainly should not be using extra plastic bags. We already do this in California, which is where I’m from. This is so behind the times."

Some shoppers were skeptical about the need to stop using plastic bags.

Lee Wilkes, a retired electrician, isn’t necessarily opposed to giving up plastic bags. His wife recently bought half a dozen reusable bags. And the couple consistently recycle, so he supports the idea of helping the environment.

If that’s the reason for the change, he thinks it’s a good idea. But he suspects there’s more to it than that.

“For Wegmans, it’s a win-win situation,” he said. “They don’t have to spend the money on the bags – we have to buy the bags. And people in the middle, they’ll just foot the bill as usual.”

Reusable bags are indeed for sale in Wegmans stores. Take your pick: a run of the mill bag for 99 cents, a zippered thermal bag for $2.99, a canvas bag for $4.99 or a cotton bag touting a recycling affirmation for $5.99.

But shoppers do not need to buy their bags from Wegmans. Cashiers will pack your groceries into any bag you bring.

Some customers said they see advantages to using the sturdier reusable bags.

“We can put more per bag and there’s less trips to the car," said Kris Weller of the Town of Tonawanda, who was shopping on Saturday with her husband Robert Weller.  "We ask to pack our bags heavy."