As the swift and drastic decline of enclosed shopping malls has proven, retail-only projects struggle mightily to sustain themselves anymore.

Elsewhere in the country, developers have had great success overhauling traditional shopping malls and turning them into more diverse town centers. Now, plans to do the same to malls in the Buffalo Niagara market are finally beginning to take hold.

The owners of Eastern Hills Mall in Clarence and Boulevard Mall in Amherst are planning massive overhauls that include demolishing large portions of both centers and adding a mix of residential and office space. Smaller-scale plans in Amherst will revamp the former Northtown Plaza and transform it into the more trendy and upscale Station Twelve, which surrounds stylish retail buildings with luxurious green space.

Town centers mimic small, urban communities, with retail integrated among high-end residential and class A office space. The stronger mix of rent-paying tenants keep properties from having to rely on retailers for their bread and butter, and keep the projects more stable.

Here's what we can look forward to.

According to the preliminary timeline, we won't see the final phase of the planned town center at the Eastern Hills Mall until at least 2040. But just because there's a long way to go doesn't mean owners Uniland Development and Mountain Development, along with architect Gensler, won't be hard at work in 2020.

Much of that work will center around securing financing and tenants for the ambitious $250 million project.

Plans call for apartments, offices, hotels, townhomes and walking trails to encircle boutique style retail, restaurants and public recreational space. Much like the Elmwood Village, buildings will have retail on the first floor with apartments upstairs. You will be able to drive throughout the village-like community and park on streets in front of retailers, or in parking lots and garages that are tucked behind office buildings and stores.

So-called barn spaces can host public or private events of varying sizes. Green space can hold everything from an outdoor movie to a music festival. And driverless shuttles could eventually move residents and visitors throughout the property.

The first phase of development – which developers hope to break ground on in 2021 – will begin at the heart of the center, focusing on heavily on retail and communal space. The mall's current tenants will remain open throughout construction. Some freestanding buildings – Raymour & Flanigan, Niagara Emporium, J.C. Penney and the former Sears – will remain in place, while much of the rest of the mall will be bulldozed.

Boulevard Mall owner Douglas Jemal plans to "de-mall" the mall, he said, referencing the national trend that Eastern Hills and malls across the country have embraced. It will be called Boulevard Place, not to be confused with the Boulevard, formerly Boulevard Consumer Square, down the road.

The newest of the lifestyle center projects, details of the plan have not yet been revealed. But Boulevard Place will mix retail, office and residential development. Jemal expects construction to begin in the spring, and stores will remain open while work is underway.

Jemal bought the 64-acre Boulevard Mall property in Amherst for $30 million over the summer, which includes the Alberta Drive site leased by Wegmans. He recognized the same potential that the Town of Amherst and real estate experts have noted about the mall for years: a great location with strong demographics and high visibility.

An overhaul of Boulevard Mall is just one of several high-profile irons Washington, D.C.-based developer Douglas Jemal has in the fire. Last month he bought the former Hook & Ladder No. 8 building behind the Seneca Buffalo Creek Casino, adding it to his Buffalo portfolio that includes the River Rock Industrial Incubator property on Rano Street and the former Buffalo police headquarters on Franklin Street. That's in addition to his $120 redevelopment plans for the Seneca One tower he bought in 2016. 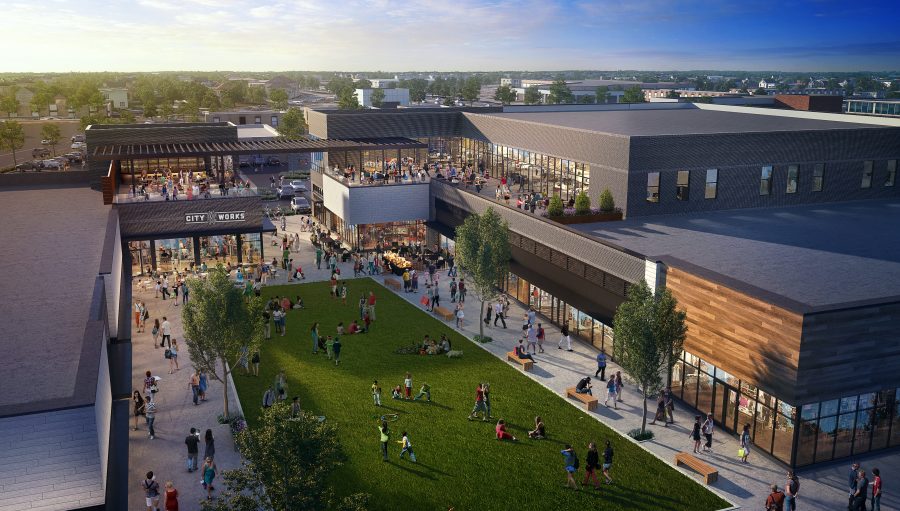 A rendering of what Station Twelve, the transformed Northtown Plaza in Amherst, will look like. (Rendering courtesy WS Development)

The former Northtown Plaza isn't a mall, but that's OK. The redevelopment happening there won't really be a town center.

WS Development's plan is to turn the 18-acre site into a lifestyle center called Station Twelve. Unlike the large-scale town center projects that incorporate hotels and living space, lifestyle centers stick to open-air retail with added leisure amenities and green space. They aim for an upscale feel and have traditionally targeted more affluent consumers.

When they open at Station Twelve, L.L. Bean, West Elm, Athleta, City Works and B. GOOD will enter the Buffalo Niagara market for the first time.

Green space on the property at Station Twelve will host community events and activities year-round, the developer said. Those events could include outdoor yoga classes in the summer, or a Christmas tree lighting in winter.

Recruiting tenants and getting them to sign leases has taken longer than the developer expected, it said, and WS has had to push back its timeline. But it expects tenants to open at Station Twelve by summer.