It will be a busy two years or so as the Albright-Knox Art Gallery embarks on its first expansion since 1962.

The biggest part of the expansion – a new three-story glass building on the northern end of the campus – will allow twice as much artwork to be on display.

Now: Temporary fence barricades and heavy construction equipment are signs of the work underway since the Nov. 22 groundbreaking. The buildings have been secured. Gas, electric, sewer and water remain fully functional so crews can do work inside the buildings during the construction period.

Beginning in February: Workers with excavation equipment will clear the site, which is expected to last a few months. The parking lot will be removed, along with curbs and some trees. A field office will also be set up.

Starting in late summer: Foundation work for the new building will begin. That will be followed by the construction of foundation walls and preparing for steel that will be erected later in the year. Upgrades will be made to the mechanical systems in the 1905 building, and interior renovations will be made to the 1962 building. Part of the space will become the museum's educational wing with classrooms, while another part will become a covered courtyard featuring a mirrored, funnel-shaped glass canopy. 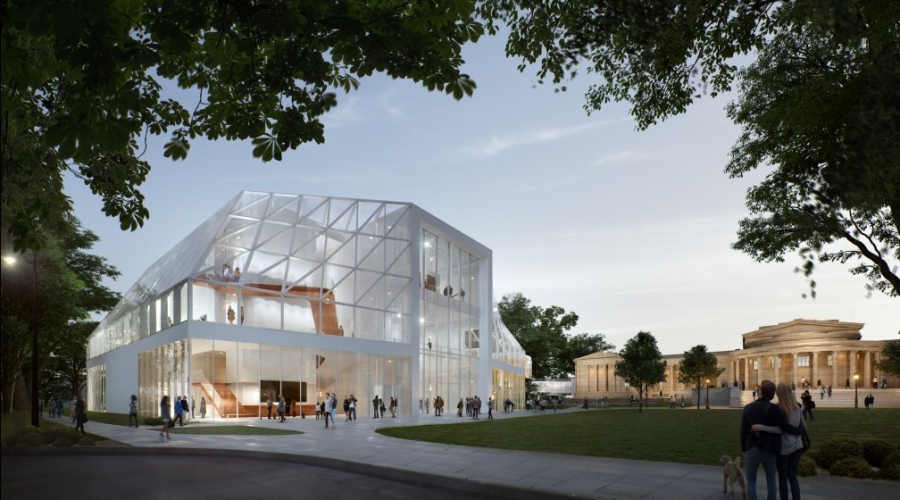 A semi-transparent, three-story building on the northeast end of the campus will double exhibition space and serve as the main entrance. (Courtesy of Albright-Knox Art Gallery)

Timeline for completion: "Right now, we're following the museum's lead that the project will be completed in 2022," Cleary said.

He said the completion date will depend on a number of variables, including weather.

Gilbane is proud to work on a project of this magnitude, Cleary said.

"The Albright-Knox does a building every 60 years," he said. "If you look at the significance of this project, it is going to be standing well over 100 years, and it's part of Buffalo's renaissance."

For Disch, the Albright-Knox becomes the third museum expansion for which he has worked as project manager. He recently worked on the renovation of the Norton Museum of Art in West Palm Beach, Fla., completed in February 2019.

He also worked on the 100,000-square-foot expansion of the Corning Museum of Glass, which was finished in 2015.

"It was a big glass box that is a similar design to what we're trying to accomplish here in Buffalo," Disch said.

Cleary said the company is up for anything, including Buffalo's weather.

"It wouldn't be a world-class museum expansion renovation project without challenges," Cleary said. "There are lots of challenges, but we're up to it."