“Back to the Future” movies sparked Thomas D. Grant’s interest in science when he was growing up in Clarence.

“The flux capacitor always fascinated me,” said Grant, 34, who still lives in the town and got his college degrees at the University at Buffalo. “I was into particle physics and cosmology, learning about the universe, things like that.”

Grant spends these days on the Buffalo Niagara Medical Campus exploring ways to speed development of drugs that can save and sustain life, thanks in part to a new $1.33 million grant from the National Institutes of Health to better understand how drugs work and bring more advanced drug discovery processes to human clinical trials.

Grant holds a bachelor’s degree in mathematical physics. He pursued a doctorate in structural biology early last decade after his mother, Kathleen, then a Williamsville North High School science teacher, visited the Hauptman-Woodward Medical Research Institute and suggested he could put his undergraduate background to work in medicine.

Grant two years ago became a research assistant professor in the Department of Structural Biology at the UB Jacobs School of Medicine and Biomedical Sciences. He also works at BioXFEL, a research center headquartered at UB and adjoined to the institute where he trained.

Just as the Human Genome Project now provides researchers with more ways to determine how genes impact human development, performance and illness, a similar collection of more  than 150,000 known proteins – called the Protein Data Bank – also helps tell the story. That database serves as a cornerstone of Grant’s work. 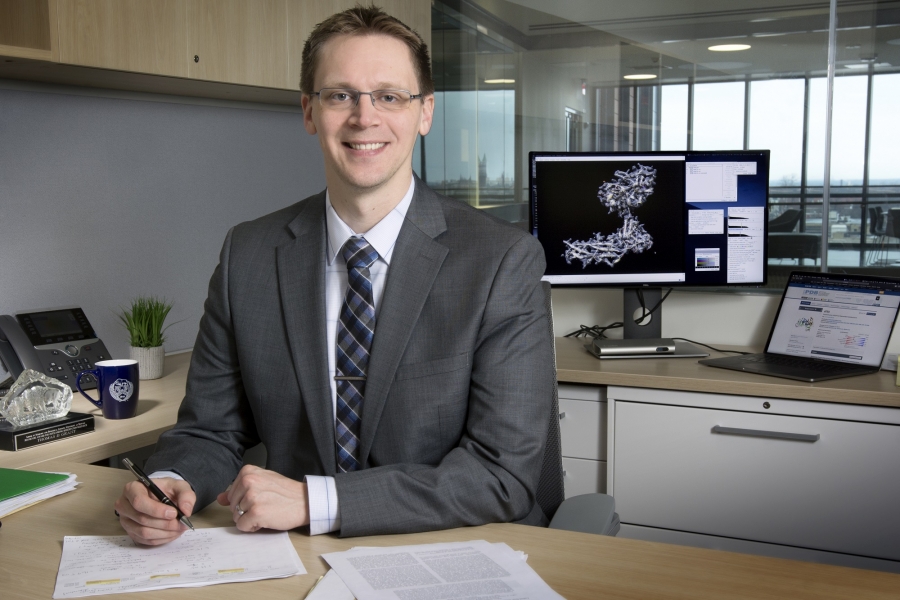 Thomas D. Grant is combining two methods at the molecular level to find out how drugs in development react to proteins known to help cause disease. He is a research assistant professor in the Department of Structural Biology at the University at Buffalo Jacobs School of Medicine and Biomedical Sciences. (Photo by Sandra Kicman, courtesy of UB)

His research involves introducing drugs in development into proteins known to help cause disease. He then bombards them with high-intensity X-ray beams in a process called crystallography, and examines the X-ray patterns that develop to determine how the drugs change the shapes of those proteins.

“These X-ray beams will scatter off the crystal in a very particular way,” he said. “We can take a picture of the way those X-rays scatter, and we can use physics and math and computers to back calculate what the structure of the protein is in the crystal. That's how we've determined the structures of proteins for the last 50 years or so.”

The process, however, is arduous, time-consuming and successful only about 25% of the time, so Grant also is using solution scattering, mixing the drug-protein combinations with a mostly water solution and using high-intensity X-rays to study their structures.

“You can do solution scattering much more quickly since it doesn’t need a crystal,” he said.

Grant is the only one in the world using this combination. He then feeds the results into a UB supercomputer that can analyze the results quickly.

He calls the method a “rational drug design process” that can study thousands of potential drugs more quickly to determine side effects, the most effective dosages and other benefits – and maybe one day lower drug costs.

“This is good,” he said, “because we’ll have a lot more capability of curing diseases that haven't been cured, getting rid of side effects that we haven't been able to get rid of with the traditional ways.”

Grant and his co-investigators – Andrew Bruno, with the UB Center for Computational Research, and Lee Makowski, professor and chair of bioengineering at Northeastern University in Boston, an expert in solution scattering – aim to perfect and streamline the process this decade.

That may seem like a long time, but many of today’s popular drugs, particularly those that fight cancer, took at least twice as long.

Still, to be sure, the pace of drug development has quickened during the last half-century.

“For thousands of years, it was traditional therapies,” Grant said. “People would find out that some flower in the Amazon made your headache go away, or something like that. As we got more technologically advanced, we realized that there were parts of the flowers that were causing this effect, so people would grind them up, and then they would try and identify what part was the key ingredient. Then they would figure out what the ingredient was, isolate it, and turn that into a pill.

“Now that we have a lot more science behind it, we can do more rational drug discovery where we can say we have this library of compounds, potential drug molecules that we've developed, and we can screen them. And we can say, ‘How do these interact with the proteins we know that are causing some problem or disease?' And we can computationally screen drugs, or do it in a lab, to find some effect.”