Strategic Financial Solutions' growth can be measured in cubicles.

The financial services firm just opened up another section of its Amherst office building, with space for an additional 450 employees. That's on top of the roughly 500 local employees it already has here.

Strategic is a third of the way to the ambitious 1,500-job target the company announced in 2017, when it expanded here from Manhattan. Ryan Sasson, the CEO, is confident about the pace of growth.

"When we first moved into Buffalo and were getting acclimated, we had high hopes," said Sasson, who spends a few days each month here. "It's exceeded our hopes significantly in pretty much every area. We're ahead of plan and hiring for what we committed to the state. Buffalo has just really accepted us and made Strategic part of the community and we feel a tremendous bond to Buffalo."

Strategic is not a debt collection firm, but instead a debt settlement firm. Its employees work with consumers coping with excessive credit card debt, and help them to avoid falling into that trap again.

Just over two years ago, Strategic settled into its permanent customer contact center on Lawrence Bell Drive and started filling up cubicles. The company has now moved into the third phase of its Amherst offices, and expects to populate the vast room with employees over the course of this year.

Strategic's expansion into the Buffalo area was a test of whether the company could operate from two different cities, as well as whether the Buffalo Niagara region could supply the needed workers.

Jordan A. Levy, a local investor in the company who helped persuade Sasson to expand the business here, said he is sure the company will hit the 1,500-job target.

"They're crushing it there, frankly," Levy said.

Competition for talent is stiff nowadays, with the local unemployment rate hovering at a two-decade low of around 4%. Sasson acknowledges this point when he speaks to classes of new recruits, each consisting of eight to 20 hires.

One job category where the company has struggled to find new hires: information technology development.

"We just haven't figured out how to tap into the Buffalo market" for those positions, Sasson said. "I know it's there. I'm dead set on figuring it out because we are making huge investments in technology and data and data science." 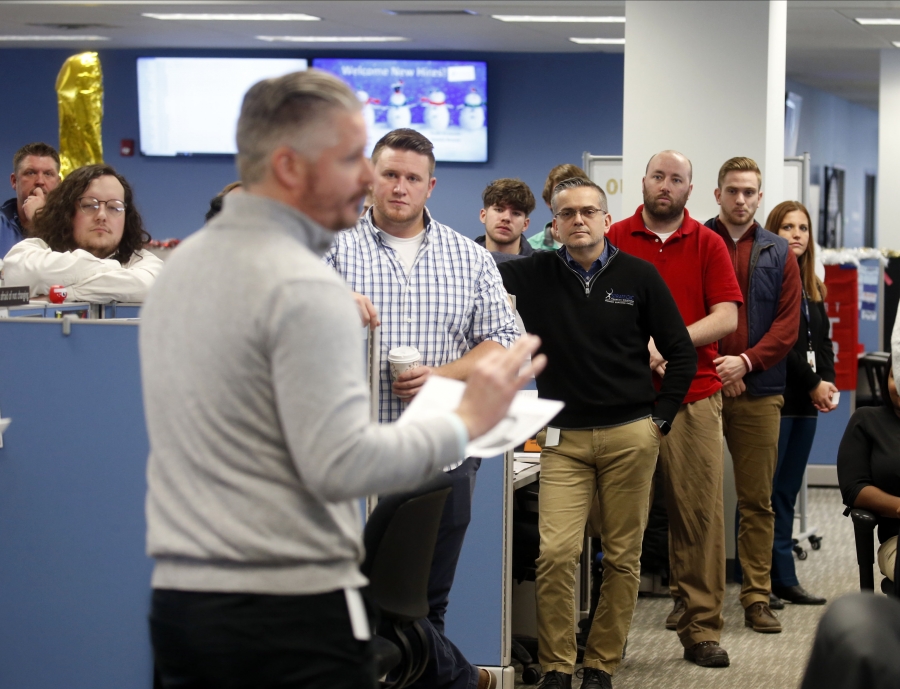 Rob Bilson, director of negotiations, tells employees they met and passed their quarterly business goals during one of their monthly town hall meetings. (Robert Kirkham/Buffalo News)

Sasson said the company uses a variety of approaches to try to create an appealing workplace, from contests and rewards programs, to referral bonuses paid for new employees. In late 2017, the company converted to an employee stock ownership plan, giving workers a personal stake in Strategic's success.

The company runs an in-house program called "Strategic Dreams." Employees submit messages describing their dreams, which have included taking a first-time family trip to Disney World, visiting an ailing grandparent who lives far away, financial help with staying in a house, and buying an engagement ring. Each quarter, the company reviews the submissions and grants 15 to 20 of the wishes. "And that only grows," Sasson said.

Sasson said he has never looked at Strategic Dreams as a retention tool.

"It's an amazing way to give back to people and we get an amazing response," he said. "I actually get more enjoyment when I see the pictures after."

During its relatively short time in the Buffalo area, the company has become a fan of the JPMorgan Corporate Challenge, held each June in Delaware Park. When muddy conditions ruined a section of the park after last year's edition, Strategic donated $20,000 to help the Buffalo Olmsted Parks Conservancy repair the damage.

Strategic's offices are a lively working environment when its cubicles are packed. On a recent weekday, while many employees were talking to customers on the phone, director of negotiations Rob Bilson was delivering a monthly progress report to some workers in one corner of the room, to cheers and applause.

Joshua Caron, a sales manager, joined Strategic from a debt collections firm. He was hired when the company had only about 20 employees, and he marvels at the growth and the workplace atmosphere that has developed.

"Everyone knows everyone, unlike any place I've ever worked," he said. 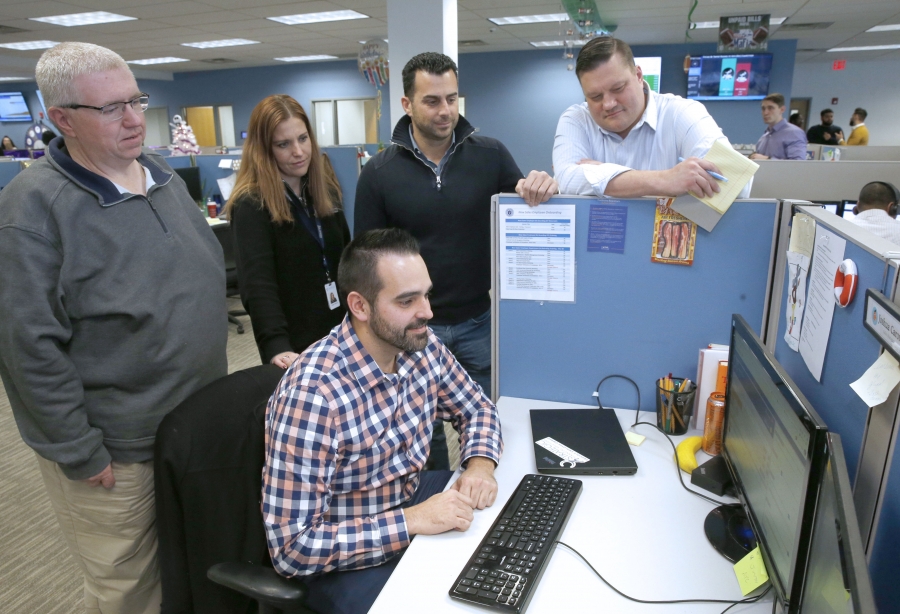 Sasson said factors like compensation are important for employee retention – Strategic uses a consultant to routinely evaluate where the company stands in the market – but he also sees workplace culture as a significant component.

"People spend the majority of their lives where they work," he said. "They should love the people around them and they should be able to have some fun and do something that they believe in. I think that's what we offer more than anything else."

While Strategic's operations are split between Manhattan and Amherst, the company strives to make those operations as seamless as possible. Some of the company's leaders are based in Amherst, and officials frequently travel between the two sites for face-to-face meetings. Strategic has about 500 employees in New York City.

A.J. Baynes, president and CEO of the Amherst Chamber of Commerce, said Strategic's growth has made a local impact.

"When you have over 500 employees put to work in Amherst, that goes a long way," Baynes said. "They're good-paying jobs they're trying to build careers with people over there.

"Their five-year plan is aggressive, but it's great to see they're looking to expand their company here," he said. "At a time when you read so much about the struggles of doing business in New York state, clearly they've figured out a way to grow their business here."

Incentives are supporting Strategic's growth. Strategic last summer received $96,000 in additional sales tax breaks from the Amherst Industrial Development Agency, to support the company's latest expansion. And the company is eligible for up to $10 million in state tax credits from Empire State Development, contingent on meeting its hiring target.

Long-range, Levy said he can picture Strategic surpassing the 1,500-job total; his only question is whether Buffalo's labor pool is big enough to fill those jobs beyond the original target.

"There's a lot of competition, with the Geicos of the world, M&T, ACV Auctions," he said.

Sasson is also thinking beyond the 1,500-job mark. "If we keep finding as many great people as we've found, then we'll keep growing," he said. "Our plans from a business perspective is a lot more growth than 1,500 people."

For now, Strategic is focused on moving people into its new room of cubicles. It's a process the company has experience with. "This has all gotten a little easier," Sasson said.