Some people watch what they eat. Paige and Tanner Szczesek have to watch when they eat.

The two children, ages 6 and 2, from Cheektowaga, have Type 1 diabetes. Like others with their condition, they must take extra insulin before meal and snacks. It takes time to work. Eat too soon, and blood sugar can climb dangerously high – a constant worry for their mother, Ashley.

“My biggest goal is that my children can just feel like children,” she said.

Thanks to a new drug developed with an assist in Western New York, they have more of a chance.

The Food and Drug Administration last month approved of a drug that brings researchers a step closer to developing an “artificial pancreas” that will provide fast-acting insulin in proper amounts at just the right time for those with diabetes.

Fiasp, made by Novo Nordisk, starts working in 2½ minutes, hits full force within 10 minutes and even can be taken shortly after someone with diabetes starts eating.

Previous fast-acting insulins took at least two or three times as long to do that job.

The newest drug has been available to adults since 2017, but the Food and Drug Administration wanted testing on children before making it available to them. More than 700 children in 17 countries participated in the clinical trial, including five children ages 13 to 17 who have been patients in the diabetes centers at UBMD Pediatrics and next door at Oishei Children’s Hospital on the Buffalo Niagara Medical Campus.

“This was a big commitment for the families,” said Dr. Kathleen E. Bethin, a clinical professor in the Department of Pediatrics in the Jacobs School of Medicine and Biomedical Sciences at the University at Buffalo, and a physician at both diabetes centers. “The kids were in the study for almost a year. There were a lot of extra blood draws and more blood sugar checks than are typically required.”

Fiasp brings diabetes researchers closer to mimicking a closed-loop system that uses a glucose monitor, continuous insulin infusion pump and other technologies to allow people whose bodies don’t make insulin to live like those whose do. 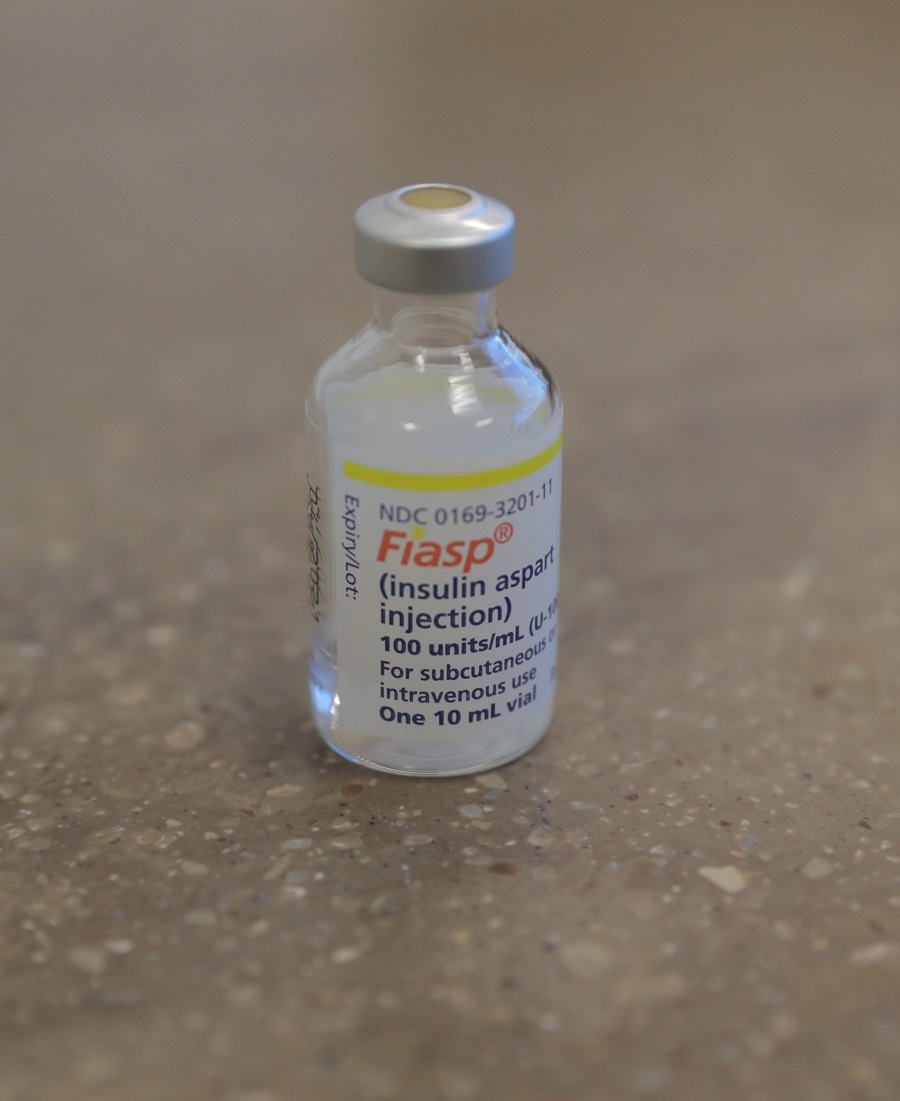 “The goal in the diabetes field is to develop insulin analogs that behave more like natural insulin, which is rapid on, rapid off, meaning it’s quickly released, then quickly dissipates,” said Dr. Lucy D. Mastrandrea, chief of the Division of Endocrinology/Diabetes at UBMD Pediatrics and medical director for the Oishei Children’s Hospital Diabetes Center. “Part of the reason this drug was developed was to have a better timeline of action that’s closer to natural insulin.”

The body breaks down carbohydrates into blood sugar to use for energy. Insulin is a hormone needed to bring glucose from the bloodstream into human cells. When blood sugar gets too low, the process breaks down and can lead to learning challenges, seizures, loss of consciousness and death. When it spikes, especially often and over time, complications include limb amputation, heart and kidney disease, and stroke.

For those without diabetes, the pancreas, liver and other organs work together to automatically and seamlessly produce insulin and adjust levels as needed.

Type 2 diabetes is diagnosed when the body doesn’t use insulin properly. It often can be managed through a combination of healthy eating, regular exercise and oral medications. Sometimes, insulin also is needed.

“Our goal is to keep them in as best control as possible during their childhood years, so that they're not running the risk of dealing with complications when they're in their 20s and 30s,” Mastrandrea said.

Drug-maker Eli Lilly engineered the first human-derived insulin, Humulin, in 1981. The company in 1996 developed a faster-acting insulin, Humalog, which is still routinely used. NovoLog and Apidra are among other brands that can lower blood sugar within 20 to 30 minutes after they are injected through a needle or an insulin pump, said Dr. Paresh Dandona, a leading international diabetes researcher, head of the Western New York Center of Diabetes-Endocrinology in Amherst and distinguished professor and chief of endocrinology, diabetes and metabolism in the UB medical school.

Administering the drugs takes planning and guesswork because eating, exercise, stress, illness and other factors affect blood sugar levels. That means those with diabetes need to predict related dips and spikes well in advance. Mealtimes generally are the most challenging because they can spark pronounced spikes.

“The food hits you a lot faster than the insulin does,” said Szczesek.

Fiasp changes the equation. The newer formulation of NovoLog includes niacinamide (vitamin B3) to boost the speed of absorption.

“There still is a lag, but it's the best thing we have,” said Dandona, whose clinic helped with adult trials several years ago and who has prescribed the drug to some of his patients during the last two years, with good results. 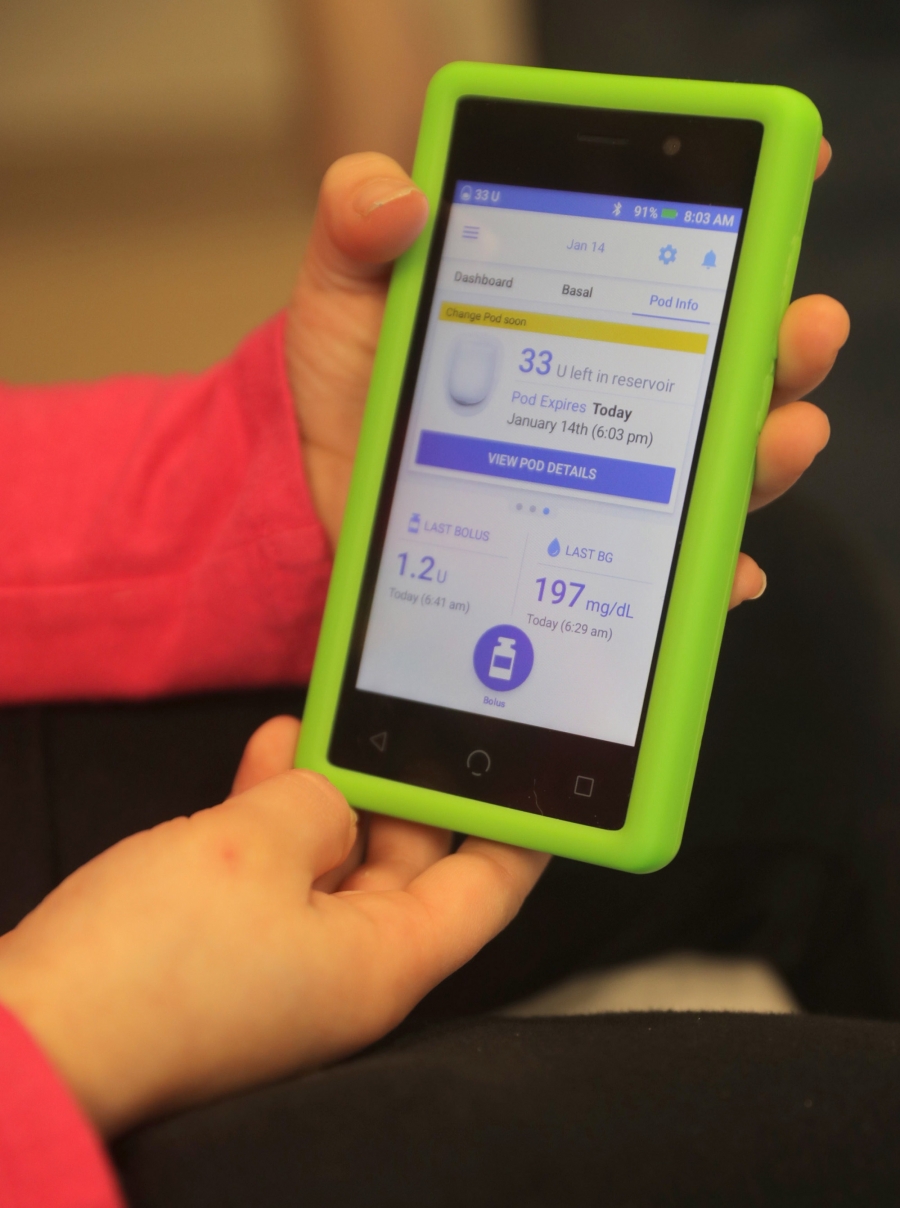 Paige Szczesek, 6, of Cheektowaga, looks at her personal diabetes manager, which helps her and others more closely track her blood glucose levels and insulin use. (John Hickey/Buffalo News)

Paige and Tanner Szczesek are on the front end of the learning curve when it comes to keeping a proper balance. Their father, Shane, also was diagnosed as a child with Type 1 diabetes.

Greater speed is a godsend for the children, each of whom has a continuous glucose monitor and insulin pump to help control their blood sugar. Paige also has a personal diabetes manager, as part of her pump, that helps her family determine when she needs more insulin and how much. Sweet treats are always on hand for times when their blood sugar drops.

When she needs more fast-acting insulin, someone needs to decide when to administer it, then see how it's working. Ashley Szczesek uses a smartphone to keep tabs on blood glucose levels for both children. She teams up with Paige’s school nurse and teachers to address shortfalls and spikes. There are phone calls or text messages every time blood sugar readings warrant, as well as reports about when and what the first-grader has eaten.

“I can't just send my kid into school and say, ‘I'll see you at the end of the day,' ” Ashley Szczesek said. “I have an alarm set on my phone for when they're high or they're low. On top of that, especially during the night, I'll normally set several alarms to get up and check their blood sugars. If they're low, I go wake them up and give them something to bring up their blood sugar. If they're high enough, I give them some extra insulin. Between us as parents and the children, there's a lot of sleep loss."

Paige’s A1c level has dropped by 1 percent, to about 7 percent, higher than those without diabetes but in a good range for someone Paige’s age with the condition.

Search for a cure continues

Fiasp can ease the diabetes burden, but not erase it.

Those without adequate health insurance may be unable to cover higher co-pays or other out-of-pocket costs. Some people have not wanted to switch for that reason, Mastrandrea said.

Meanwhile, researchers continue to pursue a biologic cure, as well as an insulin pump that works with a continuous glucose monitor to deliver insulin on a minute-by-minute basis as needed.

“In order to do that really well,” Mastrandrea said, “you want to have insulins that are faster-acting, absorb better and behave the way my pancreas does. Fiasp is in that category.”

Some of Dandona’s patients already have the most advanced insulin pump, the Medtronic 670G, though the device can be complicated for most adults to use, let alone children, he said, and still needs agents to more quickly bring blood sugars into the balanced range.

Still, for those in the field and for families like the Szczeseks, recent progress has been nothing short of remarkable.

Early prototypes of closed-looped models like the 670G once weighed two to three times that of adult patients, Dandona said, “and now we have a tiny device doing the same thing.”