When first built in the mid-1920s, the Riverside Theater on Tonawanda Street was billed as “Buffalo’s most beautiful neighborhood theater.” By 1962, Schine Enterprises, which owned the Riverside and a handful of other small movie houses, had an idea they thought could start an entertainment revolution – indoor skiing.

When Ski-Dek opened in January, 1962, it was thought that the $200,000 indoor ski center would be the first of many franchised all over the country and all over the world and would help put indoor skiing on the level of miniature golf or bowling in popularity. 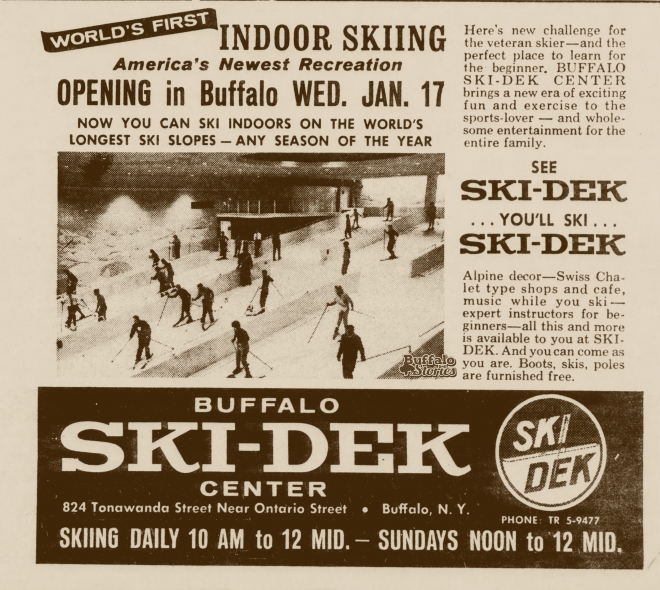 All around the country newspapers shared the news of what the owners hoped would become the new fad.

Skiing was done on “a nylon, ruglike conveyor belt which moved downhill at various speeds,” according to the United Press account. “To create an outdoorlike atmosphere, an air conditioning system furnishes cool air which blows into the skier’s face.”

With at least 35,000 Buffalonians in ski clubs, the managers of Ski-Dek said Western New York was chosen as the first market because we had more skiers per capita than anywhere else in the country.

But Ski-Dek wasn’t exactly skiing. Or was it?

“Ski-Dek is to skiing as the driving range is to the golf course,” said longtime accomplished skier Peter Andrews. “Once you get used to the fact that ‘the mountain’ is moving instead of you, Ski-Dek skiing is remarkably similar to snow skiing.”

There was a heavy dusting of chalk on the white rug surface, that cold-blowing AC and “charming Alpine décor” all adding to that hitting-the-slopes ambiance. One early attendee said the biggest detraction from the setting was the “blaring twist music.”

Ski-Dek featured nine slopes with room for 144 skiers every hour. The 1962 cost for a session was $1.50 – about $13 in 2020 money. Ski-Dek President David Schine predicted that within two years of the first Ski-Dek opening in Riverside, that there’d be 1,000 franchised centers across the country.

Today, if someone was to mention the history of the building that stood at 824 Tonawanda St., you’re far more likely to hear about the Riverside Theater, which showed its last movie in May 1961, rather than the birthplace of the indoor ski slope.