Though Indian Church Road sounds like the location of a postal office in an 1870s prospecting town in West Seneca, it’s home to a pizzeria laying a hefty claim as the shop to represent the entirety of the Great Lakes region.

Having visited most of that region myself, I can comfortably say that 99% of the competition for that title is in their backyard (shout-out to the Detroit square pie).

Great Lakes is a local favorite that I get a lot of recommendations for, and none has been so compelling as that of the mystical “Mike” as taken from its website, “Great Lakes Pizza is DIESEL!! (no roids).” Well, Mike, we’re gonna find out in a jiffy whether or not the pepperoni power needs a little extra juice. Let’s hit the locker room.

Dough: On the thin side of average and still a touch underdone. Undercarriage has the look and feel of the white bread French toast, which is an all-too-squishy experience I would prefer to keep to the breakfast table. The crust is a better bite, fully exposed and more properly browned, but won’t save an underwhelming category that really makes or breaks the experience. 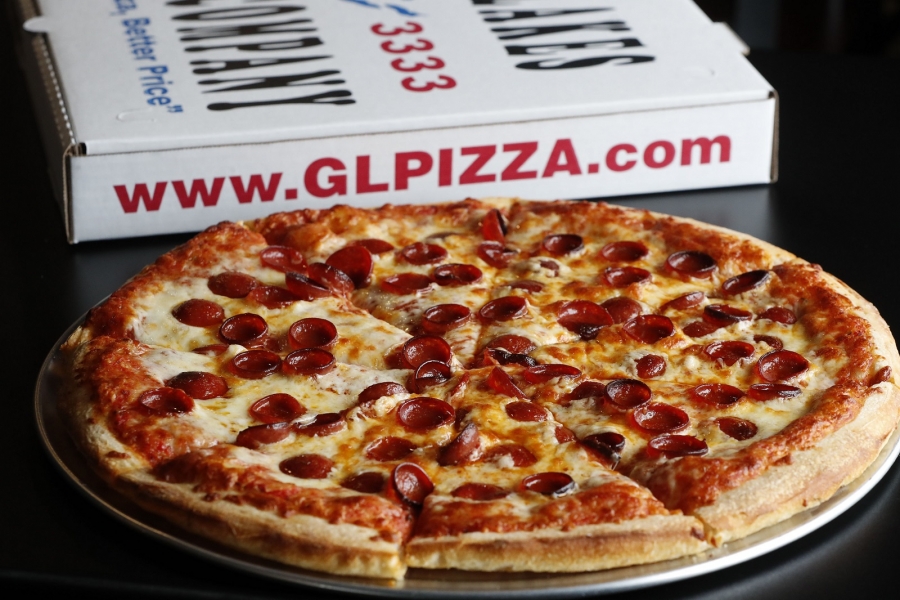 Cheese: Brown, bubbly, but falling short of ideal coverage, dawning a few crimson holes in the blanket that are hard to ignore. I prefer a thicker layer that extends to the edges of the crust, but what’s there is properly cooked and that’s far more important than keeping my pockets lined in cheese, which I often iron into handy denim quesadillas. Bob Vila never taught you that one.

Sauce: There’s a familiar mellow flavor to the Great Lakes sauce that’s inoffensive but doesn’t charm. If it is housemade, whomever is responsible for that piece of the puzzle is very much staying in the lanes but motoring at 45 mph and keeping off the highway to Flavortown.

Pepperoni: Hello, old friend. This is benchmark standard cup and char, and we’re smack in the middle of our eight to 10 per slice target. Tough to excel here, but easy to slip up on. A solid score.

The Blue Light of pizza. The Frank's Red Hot of cheese and pepp. It’s a pie that looks just like it tastes and holds no surprises for those expecting a tried-and-true pizza experience. Great Lakes Pizza may in fact be an appropriate name, considering it’s an everyman’s pizza that shows no distinct rationality in style, save the cup-and-char pepperoni, nor anything that might be pegged as out of the ordinary.

Ripped from the canvas of Norman Rockwell’s “West Seneca Sunday,” which may or may not be a real painting (get your art facts from SexySlices during the Albright-Knox shutdown), this picturesque pie is a plain and reasonably comforting experience, but as such, won’t bring me back for a third go-around.

Deal: Large cheese and pepperoni pizza on Wednesdays for $12.87.