Can the Buffalo Sabres go on a run?

That is the question running through the minds of the fan base right now. Despite Buffalo’s low playoff probability at this point of the regular season, there is a significant opportunity over the next few weeks – one that coincides with playing 10 of the next 13 games at KeyBank Center. The Sabres are 14-6-3 on home ice.

But it’s not just the lengthy homestand that gives Buffalo an opportunity, it’s also a softer part of the schedule. Other than a daunting Feb. 4 game against the Colorado Avalanche, the Sabres will play an extensive number of games against also-rans and teams similarly sitting in the muddied middle of the standings.

That is a bit of a welcome reprieve for a Sabres team that has played a tough schedule so far when it comes to the quality of competition faced.

Yes, most teams can look like game adversaries when you are struggling the way Buffalo has, but think of some of the stretches the Sabres have played through this season. Think about the home-and-home in Sweden against the Tampa Bay Lightning – two games against one of the Stanley Cup favorites sandwiched between games against Washington, the New York Islanders and Carolina. That was the opening part of the November schedule, and the Sabres (not so surprisingly) finished that up 0-4-1.

So herein lies Buffalo’s opportunity. The Sabres, eight points out of third place in the Atlantic Division and the second wild-card position, are unlikely to reach the playoffs. Most forecasts and models only give the Sabres a fleeting chance at reaching the postseason, generally hovering around 10%. In other words: They need to pick up a bunch of wins, and fast.

You can see how soft this part of the schedule is relative to what is shouldering this two-week stretch. If you look at net Expected Goal% as a proxy for opponent quality, you quickly see that this 13-game stretch – when adjusted for home/road differences – is really the only part of the season where Buffalo seems to have a decisive advantage over its opponents: 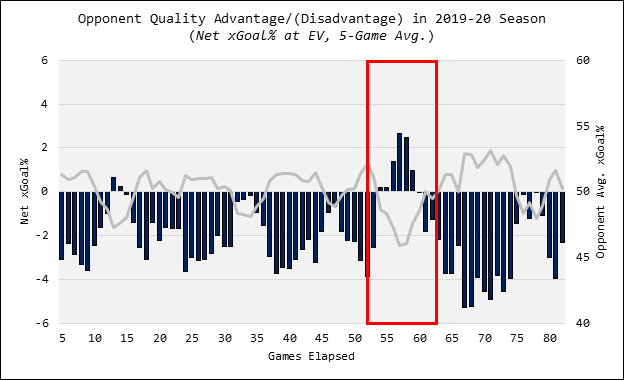 I use expected goals because it tends to be a better reflection of the quality of a team over a longer horizon, but you reach a similar conclusion using any team-based measure (Goal%, Scoring Chance%, and the like) as a proxy for quality. At any rate, this is what it looks like when you have games against the likes of Ottawa (twice), Detroit (twice), Anaheim, Winnipeg, and so forth.

The full 13-game stretch at the game level looks as follows: 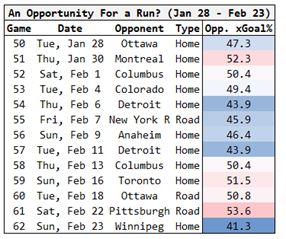 No, the Sabres haven’t given us a ton of reasons to believe they can win the majority of these games. Even a recent winning stretch – one that saw them pick up 10 of a possible 14 points before an ugly loss to Nashville – was driven largely by a hot power play and an incredible shooting percentage (better than 12% in all situations), neither of which give you a warm and fuzzy feeling that the Sabres might have turned a corner.

But they aren’t dead yet. Can Jack Eichel go supernova for another calendar month? Can the team get a white-hot stretch of goaltending from Linus Ullmark and Carter Hutton? Can secondary scoring emerge for the first time all year?

They’ll ultimately need some combination of the above, and Buffalo’s last stand starts next Tuesday against Ottawa.