There's a new neighbor on one of North Buffalo's most storied streets, and already people are questioning whether it's going to be a good fit.

The street is Tillinghast Place and the addition is a stone mansion, which looks like a majestic tribute to good workmanship and sophistication, according to some nearby residents, who called it a huge plus for the Parkside community.

Others aren't so sure. They say it sticks out, is garish, takes up too much space and encroaches on other homes along the stylish block known for its Arts and Crafts architecture.

Such neighborhood disputes might be common in outer ring suburbs, where new builds are common. But Tillinghast, where some homes date back to the early 1900s, is not accustomed to such development controversy.

This one started with a catastrophe. Dr. Robert A. Perry and his wife, Linda, have finally moved into their newly rebuilt home after a fire in November 2016 damaged the two-story Prairie-style house they lived in for more than 25 years. That house, built in 1908 on the northwestern end of Tillinghast, was one of the earliest houses on the street.

But the fire-damaged home was demolished, another example of a well-designed larger residence replacing a demolished century-old home in the city. Preservationists say the new builds do not always reflect the personality of their neighborhoods.

“Buildings give a sense of character to communities,” said Tom Yots, preservation consultant and former director and founding member of Preservation Buffalo-Niagara. “With every property gone you lose a piece of the history, whether it’s a house or commercial building or a church.”

Workers were putting the finishing touches on the house when the Perrys moved in early in December, neighbors said. The homeowners did not respond to numerous efforts for a comment. Architects involved in the design of the new house declined to comment without approval from the homeowners.

The demolition application presented to the city Preservation Board in July 2017 indicated the owners had intended to restore the house to its pre-fire state.

"Over the past seven months, construction work was done daily to achieve that goal. Unfortunately, due to significant code issues, structural problems and the exorbitant amount of money necessary to achieve this, our insurance company has deemed the house a total loss,” the application stated.

Timothy Sick, a historic restorationist who rehabilitated about 130 homes, appeared at the hearing and spoke in favor of razing the Tillinghast home.

“I’ve been in homes that are being rehabbed because of fire, and the smell is always there,” said Sick. "I don’t care if you take out all the drywall and all you leave is the wood — it smells."

The proposed demolition, denied after a Preservation Board review, ultimately was approved by the city. 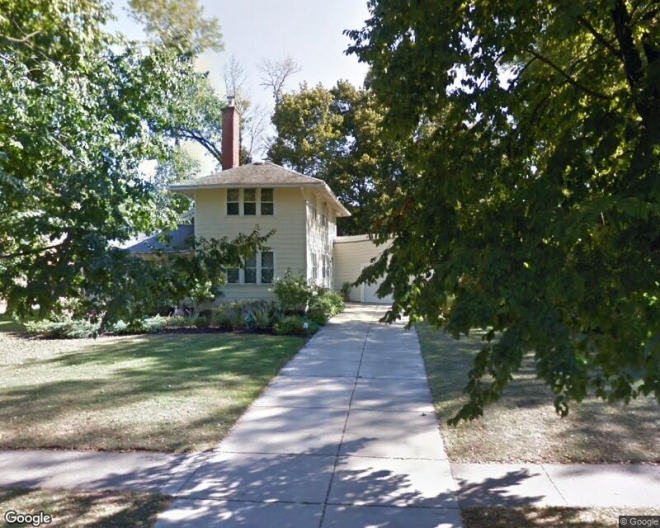 This Prairie-style house at 29 Tillinghast was demolished by owners after a fire destroyed part of the structure, built in 1908.

A Buffalo attorney who sold the house to the Perrys for $231,700 in 1994 purchased it from Nichols School in 1981. The attorney, who now lives and works in Erie, Pa., called his former home “extraordinarily unique.” He did not want to be identified or quoted by name.

Tillinghast, defined by larger lots and relative privacy, is a long, gently curving street connecting Parkside and Colvin avenues. It is known for the Frank Lloyd Wright’s Walter Davidson House at 57 Tillinghast, which also was built in 1908 and features a cross-shaped floor plan, stucco walls and diamond-patterned ribbon windows.

“Lot sizes are relatively large on this street, and it is known that restrictive covenants specified minimum building costs,” stated the National Register of Historic Places inventory nomination for the Parkside East Historic District. “These factors resulted in the construction of relatively larger and more expensively built houses than was common on most streets in the district.”

“Starting from Parkside, you have the Craftsman bungalows, old colonials and a handful of Tudors and Victorians,” he said. “I think this new house, the way it is constructed and the materials used are examples of what you can do – maybe on a more modest scale – if you can get your hands on the right land."

A Crescent Avenue architect walking her dog across the street from the structure recently stopped to review its progress, watching a parade of workers walking back and forth to their trucks.

“I wanted to give it the benefit of the doubt,” said Christine Henss. “It respects the street line. It doesn’t sit back like the original one. The massing to the house next door, the size comparison, is OK, but it’s on the line of being overpowering."

Another century-old structure on Lafayette Avenue was recently gutted and replaced when a Buffalo couple was granted unanimous approval by the city’s Planning Board in September 2016 to raze a house at 647 Lafayette and replace it with a new, larger structure. Proponents argued the demolished building had fallen into disrepair and was an eyesore.

“The residence, built in 1892, changed to apartments over the years, but it was still a good solid house,” said Martin Wachadlo, architecture historian. “A lot of neighbors are more focused on the people than on the character of the street, but in another 50 years the people will be gone, and the house will remain.”

Quagliano, the Realtor, sees good in new and old structures.

“Is that the public’s right, to pass judgement?” Quagliano asked. “As long as it’s something that does not detract from the legitimacy of a neighborhood, I don’t really see that it’s anyone’s concern.”