Hall of Fame wide receiver James Lofton, who became a position coach and later entered the world of broadcasting, got an up-close look at the Buffalo Bills' overhauled offense twice this season as an analyst for CBS.

Lofton, who played in three Super Bowls, covered the Week 7 home victory against the Miami Dolphins and the Week 10 road loss against the Cleveland Browns. And he couldn’t help but notice Josh Allen's growing on-field rapport with slot receiver Cole Beasley, particularly on short and intermediate routes.

“This year, Josh took a little bit off his fastball when he was throwing to guys,” Lofton said. “When you have as strong an arm as he does, if you’re just a little bit off, it makes it hard to make that adjustment. And occasionally, you would see Cole, when Josh might miss him, where he’d get really frustrated. And that’s the competitor in him.

Beasley started a career-high 10 games this season and played 68% of the offensive snaps, also a personal best, after approaching that amount of playing time just once in his previous seven seasons with the Dallas Cowboys. That increased playing time, and Allen's improved touch, resulted in one of the most productive seasons of Beasley's career. Not to mention an especially satisfying performance in a nationally televised victory against the Cowboys on Thanksgiving, when Beasley caught six of seven targets for a season-high 110 yards and a touchdown, then demanded that Dak Prescott trade him his jersey after the game.

But should Beasley have received even more opportunity? And should the Bills try to lean on him even harder next season, when the 5-foot-8, 174-pound receiver will be 31 years old?

How much more production is reasonable to expect?

“I'm sure that, as they go through it, they'll use him a little bit more next year, because they know he's a pretty big presence out there, even for a little guy,” said Hall of Fame former Bills receiver Andre Reed. “Obviously, what he did in Dallas was pretty epic for Dak Prescott. That's a positive to take from this year.” 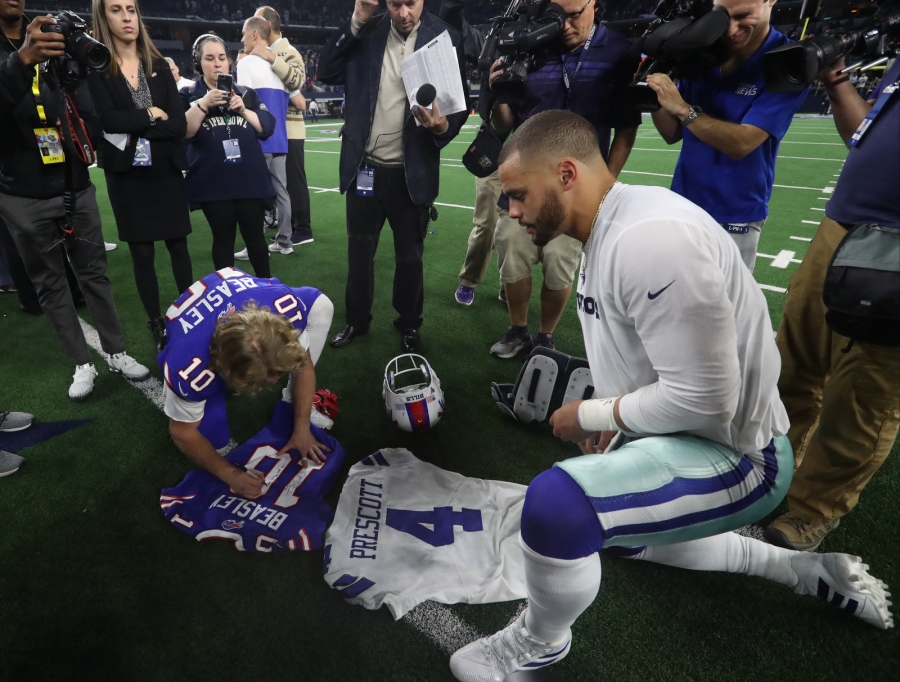 Beasley caught 67 of 106 targets for 778 receiving yards and a career-high six touchdowns in 15 games this season. (He was inactive along with several starters for the “meaningless” regular season finale.)

The targets, receptions and yardage were second on the team, behind only John Brown, whom Beasley tied for the team lead in touchdown catches.

“Down near the goal line, his quickness just kind of befuddled guys, when he would start in or start out and reverse and go the opposite direction,” Lofton said. “Guys couldn’t stay with him.”

The catches and yardage were the second-highest of Beasley’s career.

And the targets were the most he’s received.

Twenty-five of them came in the two games against New England, that 12.5 targets per game average against the Patriots doubles his usual opportunity. Beasley averaged 6.2 targets in the rest of the Bills’ regular season contests. And he was afforded even less opportunity in the Bills’ first-round playoff loss at Houston, when he caught four of five targets for 44 yards. He was targeted just twice in the second half and overtime.

“I did what I could with what I was given today,” Beasley told reporters in the postgame locker room. “As a competitor, you always want more opportunities, but, I mean, it is what it is. I mean, we should have won this game. That’s what it is in my mind. I don’t know what it is for everybody else, but there’s no way we should have lost this game.”

Beasley played 64% of the team’s snaps against the Texans, close to his season average, but a significant reduction from his hefty workload over the second half of the season.

Beasley’s snap count was depressed through much of the first half of the season, when he was admittedly still working his way back into top form after offseason core muscle surgery.

But his playing time surged after the loss at Cleveland, dropping to less than 80% of the team’s offensive snaps in just one game the rest of the way. In this span, Beasley posted his only two 100-yard receiving games of the season, in that victory against Dallas and a loss at New England.

"I’m glad Cole is here," offensive coordinator Brian Daboll said late in the season. "I know a lot of guys are glad Cole’s here. He’s a smart player. He’s instinctive. He kind of sees the game through the quarterback’s eyes as a receiver, and that’s not an easy thing to teach."

Bills coach Sean McDermott acknowledged Beasley should have been more involved in the playoff loss against the Texans, a point of contention after Duke Williams, who was on the practice squad or inactive for all but four games this season, was curiously targeted a whopping 10 times and played more snaps than Beasley. Williams had four catches for 49 yards.

“That was one of our goals early on,” McDermott said, “and they did some things at times to take him away. But overall, as you look again, that’s another area where we could have done a better job right there.”

“I think going forward, a lot of our guys on offense will be back and so I think that will help,” Beane said. “I do think continuity is important. And we’ve had more of that, more stability. Of the three phases we’ve had the most constant on defense and I think that showed in the stats. We’ve got to build that continuity on offense and I think year two, this will now be year three in Brian’s system, then it’ll be year two for John Brown, Cole Beasley, a lot of these O-linemen that we brought in. So you got to think that we’ll be able to pick up in a different place in April and May when they get back than where we were a year ago, when they were just having to learn the play calls and where to line up.”

He acknowledged the need to add talent to the receiving corps. After Brown's 115 targets and Beasley's 106, the next three wide receivers combined for 76 targets with 42 receptions and two touchdowns.

“What you really need is four guys who are out there, and I’m not talking about your running back,” Lofton said. “You need four guys who are out there who can probably catch 50 to 60 passes each, and then if you get a guy who’s going to catch 80 or 90, that’s going to be great. But you need that balance and you need to be able to throw it all over the field, so that you can have one-on-one matchups and you don’t have somebody get doubled and nobody else can step up.”

But Beasley has said he doesn’t obsess over individual statistics.

“Other than wanting to win, no, I don’t care,” Beasley said before playing the Cowboys. “I could have the worst game ever. If we win, I’ll be happy.”