Donato Morgante weighs maybe 24 pounds and stands not much more than 2 feet tall. That little frame packs in a lot of presence, which is why so many heads turned when his father and mother, Jacquie and Joe, brought him into the lobby Thursday morning at the Roswell Park Comprehensive Cancer Center.

The child buried his head in his dad's shoulder, his tiny stature illustrating why Roswell faced a challenge until a few months ago that staff members were only too happy to resolve.

Before last autumn, without a little help, it would have been much harder for an 18-month-old like Donato to find a way to make good use of the Victory Bell.

“This is the happiest day of our lives,” Jacquie said, raw emotion threatening to swallow up her words, as she and Joe led their four older children and a crowd of relatives toward the bell.

To be correct, there are actually two bells. The original was donated five years ago by Janice Trudnowski, a brain cancer patient from Forestville who died in 2018. She spent six years in treatment at Roswell, where she came to appreciate the full and immediate definition of joyous thresholds – such as completing dozens of rounds of chemotherapy.

Her initial and legendary choice for celebrating was to take a run through the fountains at Roswell. Yet Michelle Held, one of Trudnowski's siblings, said her sister sought a larger, more communal way for fellow patients to mark and share triumphant moments.

"Janice was very musical," Held said, "and she wanted something loud where a patient could celebrate the end of chemo or radiation or cancer and everyone would hear it and it would make them smile."

That was the beginning of the Victory Bell. Trudnowski set no rules about when it should be used, except for a baseline imperative. The ringing of the bell, which often draws spontaneous applause from people dealing with their own worries throughout the Roswell lobby, has one universal message. 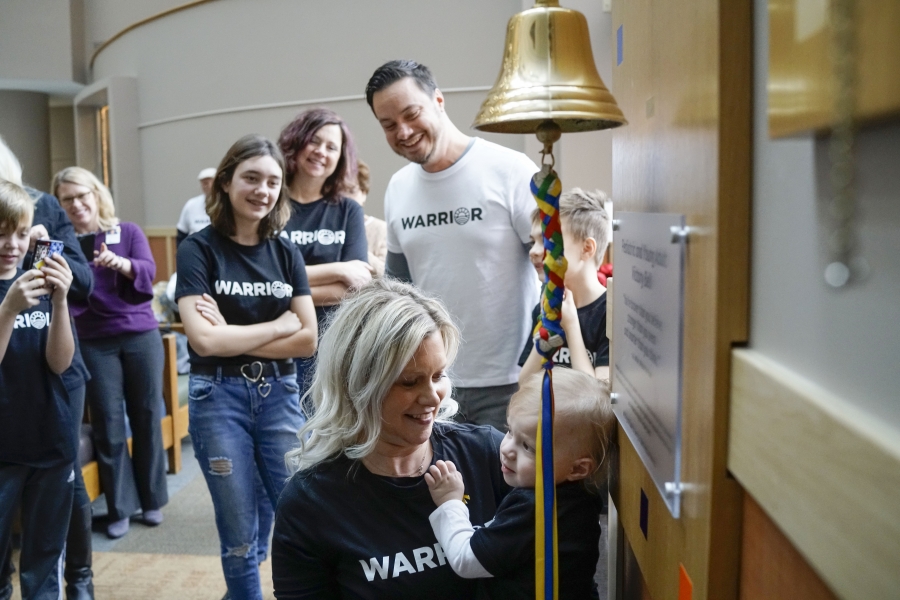 Donato Morgante is coaxed by his mother, Jacquie, and his father, Joe, to ring the pediatric Victory Bell in front of a crowd of friends and family at the Roswell Park Comprehensive Cancer Center. (Derek Gee/Buffalo News)

Roswell also serves a significant number of tiny patients in its Gioia Pediatric Hematology Oncology Center, and the staff came to a gradual realization. Without help, the littlest boys and girls could not reach the Victory Bell. In September, thanks to the Roswell Park Alliance Donation, workers installed a second bell, this one lower on the wall and with a bell pull covered in bright ribbons.

His dad works in business relations for Wegmans. His mom is a speech therapist. Five months ago, they were both at work when Joe’s sister, Denise DeJac, was busy changing Donato’s diaper. She noticed what she thought was a large bump, just above his hip.

The next day, Jacquie and Joe left their Clarence home to bring in Donato for what they expected to be a no-big-deal checkup. Instead, a doctor did her examination and then offered the brief and urgent sentences that will always stay with the Morgantes: 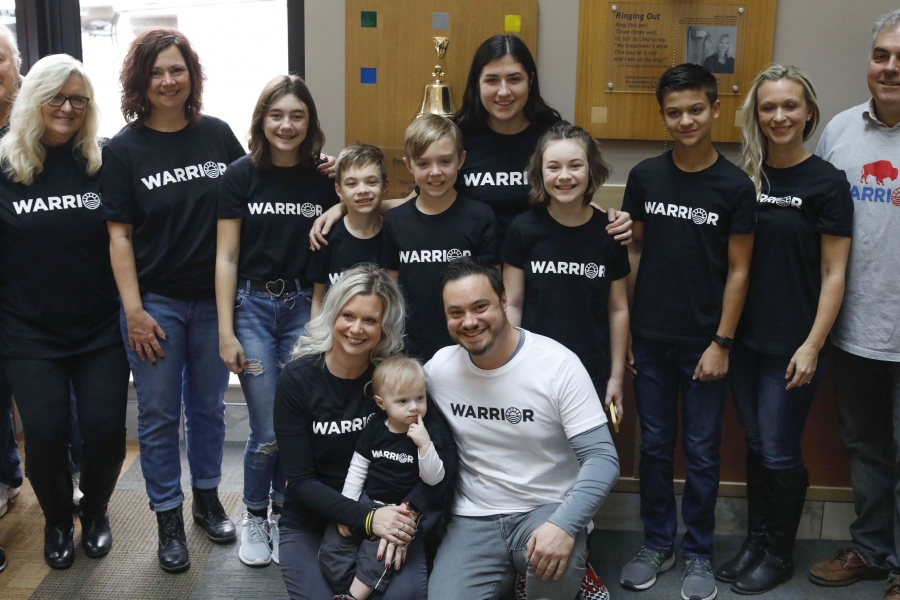 Jacquie and Joe Morgante with their youngest son, Donato, and their other children and extended family. (Derek Gee/Buffalo News)

Within six hours, specialists knew there was a tumor growing from Donato's kidney. Joe and Jacquie, afraid to leave, had to use FaceTime to explain to Donato's four siblings – Nina, Ryan, Coleman and Vincent – how their baby brother was confronting kidney cancer.

Two days later, Donato went through five hours of surgery at the Oishei Children's Hospital. Doctors removed a grapefruit-sized mass that had basically overwhelmed a kidney, a kind of cancer known as Wilms Tumor. The family learned he would need months of chemotherapy.

“At first you go through the shock,” Joe said, “and then you put your head down and do what you need to do.”

That reality equated to abrupt changes in old routines. Donato could not be around big groups of people, which meant the other children were unable to invite friends to their house. Thanksgiving and Christmas traditions had to be entirely different, and both extended families stepped in to help.

Jacquie received much-needed advice from her sister, Michelle Patel, a physician’s assistant who has worked in pediatric oncology. Jordan DeJac, a niece who serves as Donato's nanny, was happy to care for the toddler when Joe and Jacquie had to work.

All of it quietly built toward last Monday, when Donato went in for a new set of tests and what his parents hoped would be his final chemotherapy session. That evening, Joe and Jacquie took a call from Roswell.

There was no sign of cancer. Chemo was over. 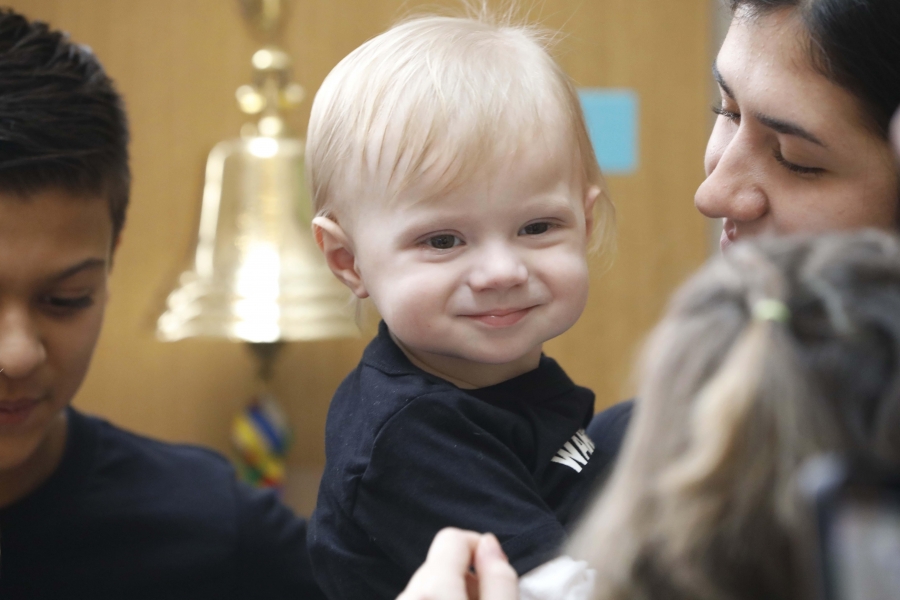 Donato Morgante, who at the age of 18 months completed treatment for a form of kidney cancer. (Derek Gee/Buffalo News)

Those around him reacted with sheer elation, within the rules of this new world in which they live. They are optimistic, but they choose not to predict or expect. "It's day by day," Jacquie said, "but that's true for everything."

Thursday, that meant carrying their little boy to an appointment at Roswell with Dr. Clare Twist, a pediatric oncologist. While Twist explained how Donato's monitoring will continue at least until he is in kindergarten, she also emphasized one point.

"His tumor was only in the kidney, hadn't spread anyplace else and his prognosis is excellent," Twist said.

From the clinic, Joe and Jacquie took Donato to the lobby, all of them in “Warrior” T-shirts supporting “Courage for Carly,” a research fund at Roswell. Twist and other staff members quietly showed up to watch as mother and father prepared for a symbolic farewell to chemotherapy, a bell-ringing that involved a bit more than they expected.

Donato, held back for months from large gatherings, was a little daunted by the circle of admirers. His maternal grandparents, Don and Kate Kellner, understood: The little boy, after his long journey, was simply overwhelmed. Joe Morgante took the toddler's hand and gently placed it on the bell pull, and together they caused the Victory Bell to sound off a few times.

For Joe and Jacquie, absolutely thrilled, that was enough. They moved from group to group as their relatives shifted into small and celebratory pockets. Donato's 11-year-old sister Ryan described the whole ceremony as "relieving," a word that did a good job of capturing the feeling.

Once things settled down, Jordan DeJac, Donato's longtime nanny, had this hunch. "He's an entertainer," she said, scooping up the child and carrying him back to the Victory Bell. Donato, happy to no longer be the focus of the crowd, reached out and touched the bell in curiosity, before his small hand took a firm grip on the bell pull.

"I knew he'd do it," DeJac said, while the little guy started ringing the bell again and again. Applause spread like a ripple through the lobby and to the corridors beyond, all of it caused by a 1-year-old of such titanic strength that with just one hand, in only a few seconds, he managed to power-lift hundreds of hearts at Roswell.

At Roswell, dog that beat cancer provides joy and comfort to patients