Food and government go hand in hand for Dean Puleo, owner of the Grotto – a new Italian restaurant near City Hall – and also the new Elma Town Justice.

For instance, Puleo was neck-and-neck with 40-year incumbent Joseph Sakowski for the town position, but the challenger had a trick up his sleeve. On the Wednesday before the Nov. 5 election, Puleo visited the Elma Senior Center armed with 120 cannoli and a notepad to write down email addresses.

The result? An upset victory by a mere 135 votes. Chalk up a win for cannoli.

Puleo's past food forays have included the Pizza Wharf and the Blue Lantern in Elma, but his job as a family law attorney takes him downtown to the courts on a regular basis. 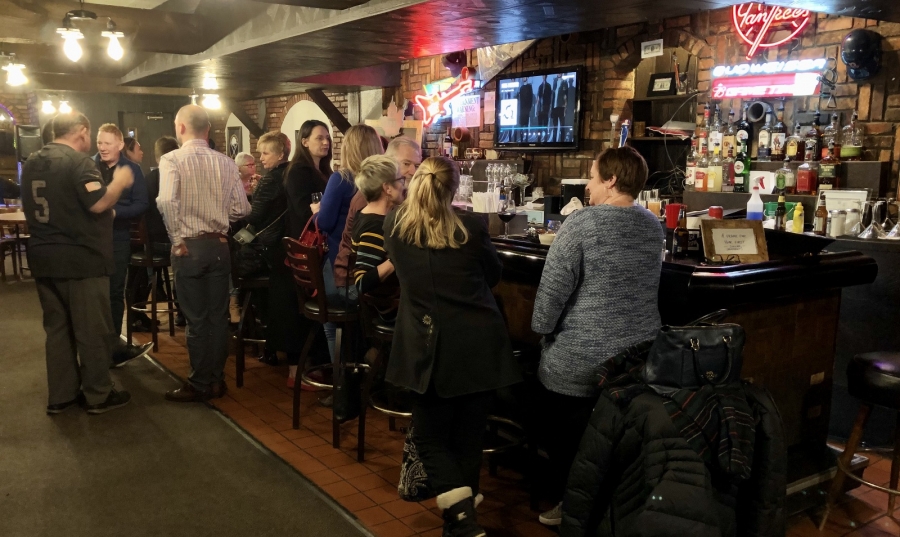 Customers hang out around the bar at the Grotto. (Ben Tsujimoto/Buffalo News)

Out of a desire to fill the void for a quick, affordable lunch near City Hall and an urge to remain involved in food, Puleo has unveiled an Italian family restaurant in the old Marotto's at 60 Niagara St. The restaurant is called the Grotto because of how easy it would be to change the existing Marotto's sign. "All I have to do is buy a 'G'," Puleo said.

The venture is an outlet for Puleo's fun-loving personality, too.

"People have said to me that they like the feeling of the place – they say it reflects me," said Puleo, who plays the harmonica in the band Wicked Tuna and also acts in murder-mystery dinner theater. "I'm kind of an open guy, so people feel comfortable."

After a soft opening on Thanksgiving for post-Turkey Trot festivities, followed by the debut of the full menu Jan. 6, the Grotto is now running full bore with an express lunch of six entrees (meatball sandwich, ravioli, open-faced turkey sandwich, for example) under $10 apiece, more elaborate dinner options and a Friday happy hour that runs from 4 to 7 p.m. For the dinner takeout crowd, the Grotto will offer family style dinners to go. 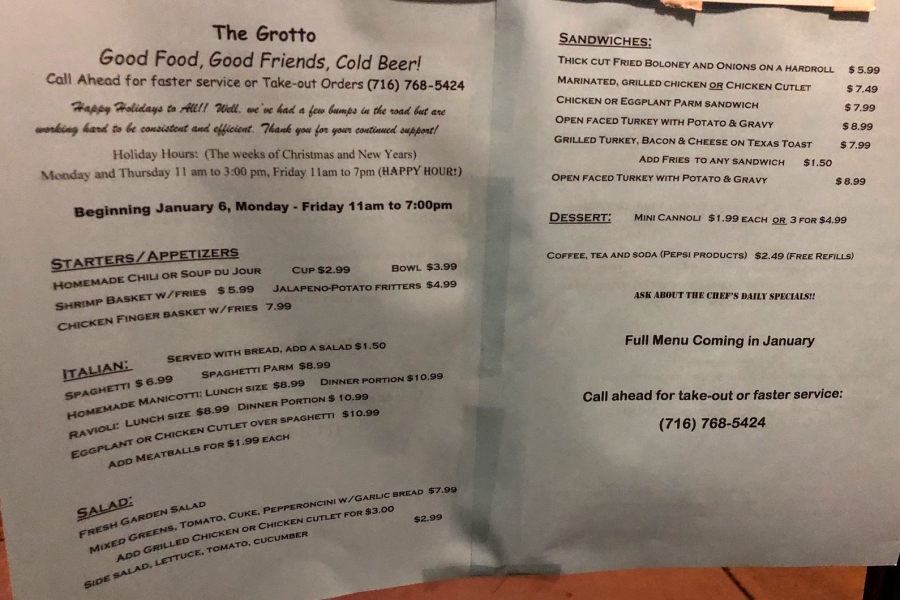 The preliminary menu for the soft-opening phase of the Grotto, on Niagara Street by City Hall. (Ben Tsujimoto/Buffalo News)

Chef Richie Isaacs (Mothers, J.P. Bullfeathers) leads the kitchen with the help of Puleo, who credits Sunday dinners with his Sicilian grandmother, who spoke no English, and the cooking influence of his aunt while growing up in Buffalo's West Side.

Puleo calls his sauce sugo, shorthand Italian for Sunday sauce, which colors several dishes, from spaghetti and eggplant Parmesan to ravioli and lasagna. Isaacs and his staff bread the chicken cutlets and eggplant by hand, Puleo said.

Most interesting is Puleo's manicotti ($8.99 lunch, $10.99 dinner), which isn't made with the usual sheets of macaroni. The Grotto's manicotti instead features thin, housemade crepes concealing the meat-and-cheese mixture. The texture is different, for sure, but not unpleasantly. 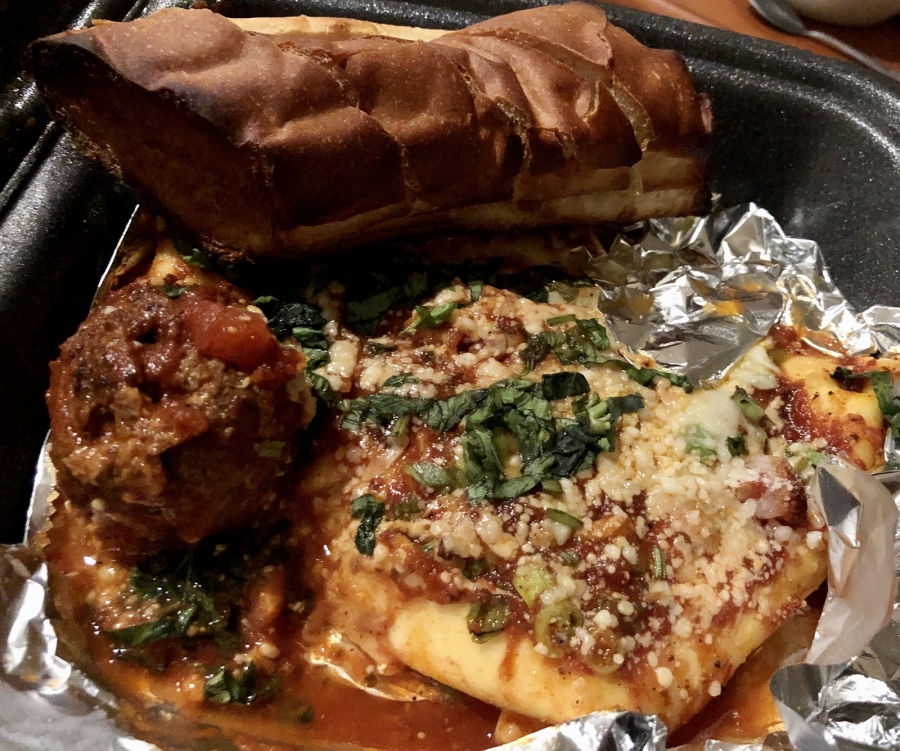 Occasional live music, Friday happy hour deals – which was a second shot of liquor in a cocktail for $1 when we went – and lunch and dinner specials posted to the Grotto's Facebook page are other appeals. The drink list is standard with a few local options, including Big Ditch Brewing's Hayburner, complementing domestic staples.

While his new town justice responsibilities shouldn't pull him away from the Grotto too frequently, Dean Puleo has entrusted his son, Tony, with bartending and helping run the restaurant. Even though the interior feels a little quaint, the atmosphere is warm and welcoming, a promising trait for a new restaurant in a city filled with Italian options. 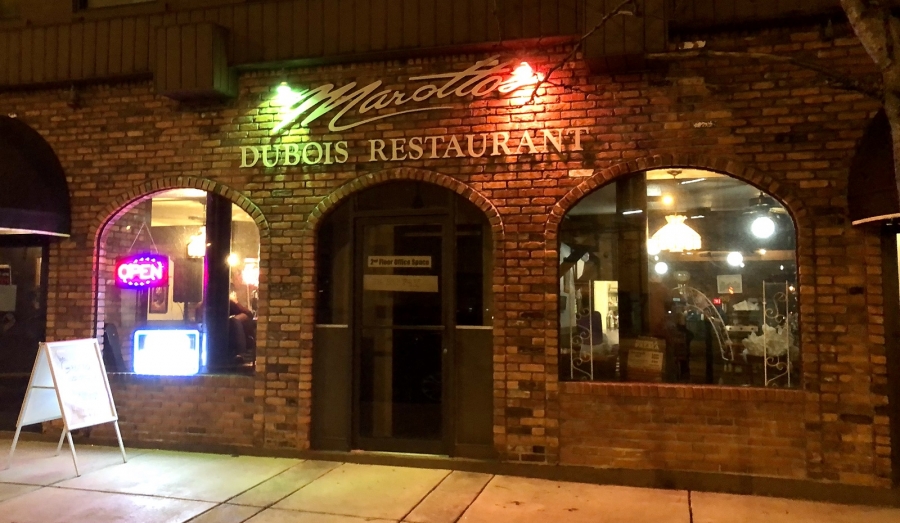 The outside of the Grotto, still boasting Marotto's signage in late December. (Ben Tsujimoto/Buffalo News)